Then one day she sees a TV show with a gay male character, or reads a bit of slash fiction, or simply looks around her circle of friends. She realizes that she’s schwul – and suddenly so many things become clear... at least for herself.

Those around her, though, will probably not understand. She can’t explain how it’s possible that a woman can be schwul. How do you explain something when the language you speak lacks the words for it, when the culture you live in doesn’t see it as possible? (She may notice that she's in a similar position to a trans person a century ago, unable to explain how someone who looks unambiguously male could in fact be female, because the word and the concept of transgender have not yet been created.)

Unless she is superhumanly self-confident, she will almost certainly falter, overwhelmed by the task of explaining an identity for which the words do not yet exist in common parlance. Doubts will arise: Can a woman really be schwul? A man lesbian? Or am I crazy?

In the modern world the general public has at least some awareness, however fallacious, about transgender identities -- so girlfags and guydykes who are also gender-dysphoric may have an easier time explaining themselves. If you’re not just doubting your sexual orientation, but also your gender, the concept suddenly is easier to understand for many people. Of course, transsexuality isn’t accepted in all parts of society – but it’s possible, it’s thinkable!

Saying "I'm a woman who feels male and I am attracted to men as a man" or one of the famous sentences "I’m a gay man in a woman’s body“ or "I want to be a lesbian woman" is at least conceivable, even if many people are uncomfortable with the idea. The connection between gender and sexual orientation is still very firm, both within and outside in the LGBTQ community.

However, a schwul woman who is comfortable in her female identity seems to have no chance of acceptance: if she insists on her female gender, she’ll be – in the worst cases – seen as a desperate heterosexual "fag hag," or pathologized as someone with severe gender confusion.

Guydykes have it even worse, encountering open hostility in lesbian culture, where they are seen as perverts. Some gender-dysphoric guydykes are treated more gently, as pre-op pre-hormone trans women, but even this is far from certain.

This is where the girlfag and guydyke concept becomes controversial even within our own small community. Are girlfags and guydykes simply "gay trans people in training"? If so, why aren't they all working toward transitioning, instead of fighting for recognition of a still rare and poorly understood identity? *)

Between cis and trans, between hetero and gay

In reality, I think, girlfags and guydykes are somewhere in between, occupying a huge grey area between cis and trans, between homosexuality and heterosexuality.

Girlfags, as an example, can be plotted on an axis, with heterosexual fag hags on the one side, gay transmen on the other, and girlfags somewhere in between. (The side toward which they lean is different from individual to individual.)

Thus, some girlfags prefer male pronouns for themselves, some female pronouns. Some identify as female and prefer traditionally feminine clothing and makeup, whereas others say that "they always wanted to be a boy" and appear more like butch lesbians. What they have in common is that they are sufficiently between categories to feel uncomfortable calling themselves either "heterosexual females" or "gay trans men."

For some gay trans men and lesbian trans women, the identity as girlfag or guydyke was a kind of interstage along the path to transition. But it would be wrong to assume that all girlfags or guydykes will eventually become transsexuals.

I was born in 1984 into a very traditional family. Although my grandmother, as the principal earner of the family, could have been seen as an early feminist, queer topics were never even mentioned in our home. Nonetheless, I was interested in “gays and homosexuality” since puberty - in a diary entry from my seventeenth year, I call myself a “female schwulhetero.”

After several unsuccessful thought experiments (Am I lesbian? Transsexual? Crazy?), by 2007 it was clear to me that I had to accept what I always thought was impossible: I was schwul!

In spring 2008, I found Uli Meyer’s article about girlfags and transfags *) – and it was like an awakening. After my experiences in an online trans community – where I was shown a lot of understanding but also (because of my female identity) a lot of rejection – I founded the first German homepage and the first German discussion board for girlfags (which now also includes guydykes and several other queer identities).

It was interesting for me to learn that some girlfags and guydykes have reservations toward girlfags who express themselves in a very feminine way. It seemed to be difficult for them to imagine that there are women who identify as schwul but who never remembered having “always wanted to be a boy.”

I realized again what I had realized in other queer groups before: If a ciswoman looks too feminine – meets the heteronormative expectations for her gender – many people can’t fully believe that she’s queer.

Traditional femininity has a troublesome reputation in some queer communities – it’s often seen as sign of weakness, submission and assimilation to heteronormative expectations.

The more I read about queer femininity, the more I realize that others – trans women, femme lesbians, etc. – have had similar experiences.

This was a strange discovery for me, as I identified – in the real meaning of the word – as a “female fag”. The more I dressed up, the “gayer” I felt, and the more I felt schwul, the more flamboyantly I dressed. If I had to name my male alter-ego, I would name effeminate, style-conscious men like Emmett Honeycutt (from Queer As Folk) or Marc St.James (from Ugly Betty).

The diversity of queer

But I have to admit that I was naïve, too. I thought that every girlfag had as strong a female identity as mine, and shared my love of fashion and other feminine/effeminate pursuits. 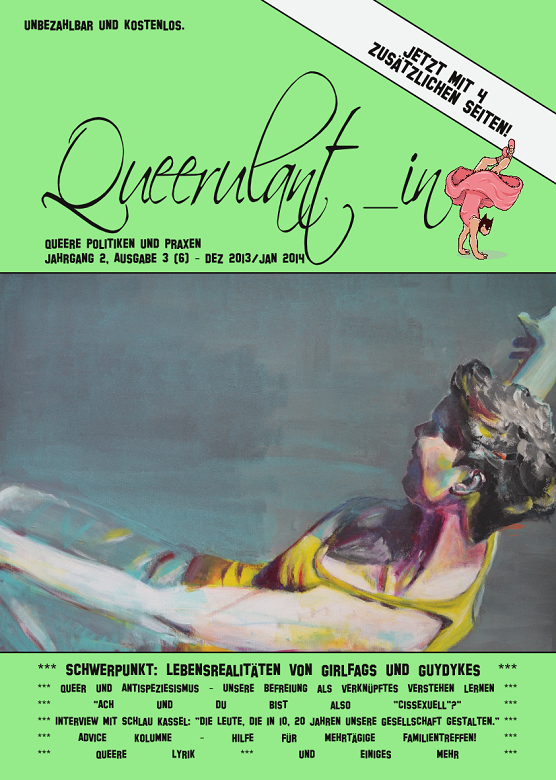 As I met more girlfags and other non-normative queers, I realized how multifaceted the concept is, and saw that you can’t do it justice by putting it into the “trans corner” (or any other corner).

Now I know that girlfags and guydykes are as versatile as the queercommunity they feel attracted to: There are (more or less) female-identified drag queens and fags, bear lovers and leatherfolk, crossdressers and androgynes, lesbian girlfags, butches, femmes and many others. Our small part of the queer world is as multifaceted and colorful as the queers we love.

*) Meyer points out that although the word "girlfag" is new, the identity is not - Magnus Hirschfeld profiled a gay-male-identified woman in the early 20th century (p. 73), http://www.liminalis.de/artikel/Liminalis2007_meyer.pdf

Thanks to Janet Hardy for help with the translation.

See also:
The Rayka & Jack Dialogue on Crossdreaming 1
The Yaoi Culture and the Female to Male Crossdreamers
The Girlfags of Ancient Baghdad
Ray Blanchard and the Missing Girlfag (The DSM-5)
Posted by Jack Molay