Jaimie Veale is a New Zealand scientist who has spent quite some time on understanding transgender and transsexual conditions, including what I call crossdreamers.

I 2011 she published her doctoral thesis on gender variant identities, a follow up on earlier work that had also discussed Blanchard's autogynephilia theory about birth assigned males who get aroused by the idea of having a woman's body.

Her own research supported a model with a wide diversity of gender identity and gender expressions, all with some kind of common core.

Her doctoral thesis efficiently debunks the whole model of Blanchard's. She finds none of the patterns he has projected upon the transgender populations. The sexual orientation of transsexual women (or transgender male bodied persons in general) cannot be used to sort them into two distinct groups with different origins.

Her study is based on a a survey of  of 2277 respondent, gender variant and gender typical, recruited via the internet. This makes it, to my knowledge, the largest survey of this kind, and the fact that she has included non-transsexual transgender persons as well, makes it much more reliable as a source of knowledge about crossdreamers.

By the way, the survey covers both female bodied and male bodied respondents. Later on, I will see if we can use the survey to learn more about female to male crossdreamers.

The male to female crossdressers and crossdreamers who feel distress from their condition are still to be considered mentally ill by American psychiatry. That is the bad news from the new edition of the DSM-5, The Diagnostic and Statistical Manual of Mental Disorders.

There is some really good news to be found in there as well, though.

The Gender Dysphoria working group has clearly had wiser leadership than the paraphilia working party of Ray Blanchard.

Secondly: they refuse to give in to the notion that there are two distinct types of transsexuals, where one is perverted and the other is not.

Being -- or having been -- a crossdreamer does not disqualify you from being recognized as transsexual.

I have gotten hold of the "Gender Dysphoria" chapter and this is what it says about crossdreamers (in the text referred to as "an individual with transvestic disorder"):

It is as if the Gender Dysphoria group has looked at all the pain the paraphilia subworkinggroup will cause transsexuals through their Transvestic Disorder text and decided to do something about it.


Click here to read the rest of this article!
Posted by Jack Molay 51 comments:

"Autoandrophilia" did not make it into the DSM-5

I have had a hard time getting a hold of the relevant texts from the new edition of the American psychiatric manual, the DSM.

So much for democratic transparency.

From what I hear, though, it seems "autoandrophilia" did not make it into the DSM.

Someone within the DSM machinery might have concluded that enough is enough. There is no research underpinning this "disorder", so let's leave it out. That would be the optimistic version of what has happened.

According to my source the "autogynephilia" term remains under the Transvestic Disorder category.

This means that male bodied crossdreamers who feel distress from their gender variance are considered mentally ill, while female to male crossdreamers and crossdressers are not.


Click here to read the rest of this article!
Posted by Jack Molay 7 comments:

Ray Blanchard and the Missing Girlfag (The DSM-5)

Ray Blanchard denies the existence of female to male crossdreamers, in spite of including "autoandrophilia" in the DSM-5, and in spite of having described a girlfag in a 1987 paper on transsexual men and women.

Tomorrow the American Psychiatric Association is to publish the fifth edition of the American manual for mental illnesses (DSM-5).

(Update 1: The manual was presented at the APA annual meeting today, but the text has not been published online)

Unless there has been a miracle "autoandrophilia"will be included as a new mental disorder.

"Auotandrophilia" is, as some of my readers will know, Ray Blanchard's term for female bodied persons who get aroused by the idea of being men -- people I call female to male crossdreamers.

Many of them call themselves girlfags. Some, but not all of them, are transsexual. Others, but not all, are crossdressers.

Blanchard refuses to believe in girlfags

In a recent interview Blanchard, who is the leader of the "paraphilia" (perversion) subworkinggroup of the DSM, admits that he had been the one to suggest the inclusion of "autoandrophilia, not because he believes "autoandrophiles" exist, mind you, but because he would like to avoid attacks from feminists.

You read me right. The DSM is going to include a diagnosis for a new mental disorder the leader of the responsible working party, Mr. Blanchard, does not even believe exist.

This is also why he has not presented any scientific research that documents that this "non-condition" is a sexual paraphilia (perversion).

This is a scandal that undermines the legitimacy of the whole DSM-5 enterprise.

Blanchard's bizarre tactics made one girlfag make the following comment to me in an email:

"First this idiot tells me I am mentally ill. Next he tells me I do not exists. Is this man crazy?"

It would be tempting to include a new disorder for people like Blanchard in the DSM. His obsessive attempts to classify sexual perversions is more than a little disturbing.

However, this is not so much about madness, as it is about a scientific and mental lock-in.

The female to male crossdreamers threaten to undermine his whole autogynephilia vs. homosexual transsexual theory, so he has to deny their existence.


Click here to read the rest of this article!
Posted by Jack Molay 3 comments:

New films and music videos about the lives of trans people 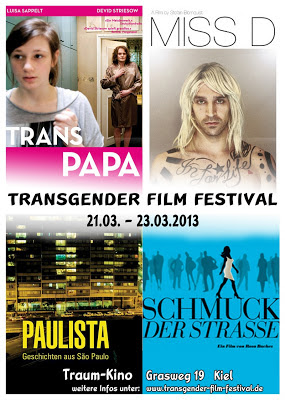 I have found myself writing more about transgender film lately.

And while I was working on a review of the Canadian film Laurence Anyways, I got an email from the German Transgender Film Festival,  regarding their award winners of 2013.

This give me an opportunity to present a wide variety of film and music covering the whole spectrum of transgender lives and expressions, male to female and female to male.

There is a lot here that leaves an impression, and you can see for yourself.

I would like to draw attention to one interesting trend: Non-transgender people who use their art to give support to cross-dressers, drag queens and transsexuals.

I can remember one friend telling me once that I could not possible like the Pet Shop Boys, because they were homosexual. It dawned on me that there was a rule in the universe that the gay were given all the good music, probably in compensation for all the other crap they had to go through. Moreover, I learned a valuable lesson about what it means to be a "real man".

Their Winner video has now, finally, given me an explanation for my abnormal enthusiasm for gay electronica.

I am also glad to announce that fellow countryman, Morten Harket from a-ha, has made a video about a crossdresser.

We are moving forward, one step at a time!

There are not that many TV episodes and movies out there who depict the sexual aspect of the "what if" scenario of crossdreaming.  This is probably because crossdreamers are invisible in the public debate, or they are classified as weird crossdressers on the one hand and weird/suffering transsexuals on the other.

We are again saved by British television.

Misfits is  series based on the same concept as American TV series like Heros, Alphas and Mutant X, but it is much darker, funnier and explicit in comparison.

The superheroes of Misfits are juvenile delinquents doing community service.

SPOILER ALERT! If you have not seen the series, you definitely ought to. Note that the following paragraphs include spoilers!

In the episode called Gender Swap, Curtis, who has been banned from organized sports, used his newfound ability to change into a woman to get on the women's track team.

As most often is the case in Misfits, this episode (and the one to follow) breaks a lot of taboos regarding sex and gender, while at the same time delivering a strong message on misogyny and the treatment of women.

I have edited some selected clips from the episodes here for reference:

Click here to read the rest of this article!
Posted by Jack Molay 62 comments:

Ray Blanchard lied when including autoandrophilia in the DSM-5 proposal

It turns out it was Ray Blanchard who suggested that "autoandrophilia" should be included in the new edition of the American psychiatric manual, labeling a large number of transsexual men as mentally ill in the process. He now admits that he did so in order to avoid being attacked by feminists. He does not really believe in their existence.

As some of my readers will remember, the  new proposed version of the DSM-5 include a category called "autoandrophilia" refering to  female bodied persons experiencing sexual arousal when imagining themselves as male.

It now appears it was Dr. Blanchard, the chair of the paraphilia sub-workgroup,  who proposed the inclusion. But he does not believe in it.

Let me quote a recent  interview with Blanchard:

"[Motherboard:] Do you think autoandrophelia, where a woman is aroused by the thought of herself as a man, is a real paraphelia [sic]?

[Blanchard:] No, I proposed it simply in order not to be accused of sexism, because there are all these women who want to say, 'women can rape too, women can be pedophiles too, women can be exhibitionists too.' It’s a perverse expression of feminism, and so, I thought, let me jump the gun on this. I don’t think the phenomenon even exists."