The Crossdreamer Survey of Gender Variance, Some Preliminary Results

The Crossdreamer Survey on Gender Variance received 1202 responses, representing a wide variety of queer and transgender people. Here are some preliminary results.

In August we invited readers to fill in a survey on gender variance. There remains a lot of serious number crunching to do, but we would like to present some preliminary findings. 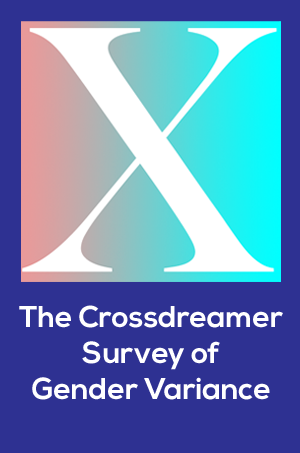 We have written a separate article that presents various methodological issues. Please read it if you have questions about why we carried out the survey the way we did.

Please note that this presentation is temporary. We will come back with an in depth analysis based on a more complex cluster analysis later on.


The number of respondents

All in all we received 1202 responses, out of which 1199 we consider valid and useful for analytical purposes.

1199 is a high response rate for a survey like this one. We are confident  that the data can be used to draw some general conclusions regarding the lives and attitudes of this group of gender variant people.

We were very much aware of the fact that the readers of Crossdreamers.com are not necessarily representative for the population of gender variant people as a whole. With the help of our friends we therefore distributed the invitation to a large number of sites, forums and social media groups. (A warm thank you to all of those who helped us!)

We knew, however, that many of these channels were dominated by people assigned male at birth. To get input from more gender variant people assigned female at birth, we developed a separate (but similar) questionnaire to be published on tumblr. This invitation was eventually published on -- and reblogged by -- 105 different tumblr blogs. This second survey also gave us more data on the younger cohort.


More about the two sub-surveys

Here are the main numbers regarding the respondents:

The Crossdreamer.com Survey (distributed via Crossdreamers.com and forums and sites targeting crossdressers, crossdreamers and genderqueer people).
Number of respondents: 720 in all (out of which 718 will be used in the final analysis)
93% were assigned male at birth, 6% female.
The crossdreamer.com sample is dominated by adults, as shown in the figure below.

The Tumblr Survey (distributed via Tumblr-blogs).
Number of respondents: 482 in all (out of which 481 will be used in the final analysis).
80%were assigned female at birth, 20% male.
The tumblr sample is dominated by teenagers and people in their early twenties, as shown in the figure below:

The Combined Survey (the results from the two surveys above merged)
Number of respondents: 1202 in all (out of which 1199 will be used in the final analysis)
64% were assigned male at birth, 36% female.
The age distribution for the total survey reflects our success in engaging young people over at tumblr. There is no reason to think that the following figure reflect the true distribution of gender variant people age wise.

We also asked the respondents whether they identified as male or female.

In the combined survey 30% identified as female, 22% as male and the rest as a combination of the two or some kind of other gender identity.

The difference between the number male and female identification may reflect the fact that there were more people assigned male than female at birth in the total sample.

The similar numbers for the Crossdreamers.com survey was 25% male, 25% female and 50% a combination of male and female or some other identification.

The tumblr respondents reported 39% female, 17% male and 45% a combination of male and female or some other gender identification.

We will, of course, come back with a further analysis of these numbers. We also included a list of various gender terms, and gave the respondents the opportunity to report other terms they make use of when describing themselves.

When interpreting the data it is important to keep in mind that we are facing at least three levels of understanding here:

1. Firstly, we are studying the self-perception of the respondents, including the terms they use to describe themselves and their gender variance. For many this description also amounts to a sense of identity: "I am transgender!" Since the respondents have different life experiences and make use of different "mental maps" when interpreting the world, their answers will not always be comparable.

In doing so we will have to make use of our own pre-conceptions as to what gender variance is or may be. This is ultimately what research is all about: You test your own pre-conceptions or hypotheses agains the data presented by the responses given. This will, however, unavoidably limit the scope of the findings. Feel free to propose other ways to interpret the data!

3. Finally, there is the level of the pre-conceptions of the readers. Gender variant people, as well as the researchers studying them and the health personnel assisting them, make use of different models when trying to understand the different gender life experiences. These models will color the way they read our analysis of the data.

We will try to keep all three levels in mind when presenting our findings.

The main target group for this survey was what we have called gender variant people. Given the confusion and disagreement as regards definitions and delimitation of gender variance in the queer and transgender communities -- as well as in medical milieus --  we did not limit the survey to people who consider themselves "transgender", "queer", or "transsexual".

One major reason for this is that we know that many crossdressers and crossdreamers may call themselves cis-gender or non-transgender, even if their feelings and behaviors will be classified as transgender by others (in the umbrella sense of the word transgender).

We also wanted to see to what extent people who do not consider themselves transsexual experience gender dysphoria, so dividing the respondents into a transsexual and a non-transsexual group from the start was out of the question.

The number of respondents who are completely "cis" (in the sense of not expressing any gender variance as regards expressions, feelings and/or identity) was 1 (a partner living with a transgender person). All the other respondents reported some kind of gender variance in the sense that they reported feelings, self-understandings or behaviors that are normally considered outside the current dominant norms of sex and gender.

This should come as no surprise. There will be a clear selection bias towards people who are gender variant in surveys like this one. After all, the main reason for taking an interest in the topic is most likely that the person experiences some kind of gender variance, or that a friend or family member do so.

Why do some respondents call themselves cisgender?

There may be many reasons for this discrepancy:
53% answered no to the question "Do you consider yourself cisgender?" And 62% reported that they considered themselves transgender.
The term "transgender" was defined in the questionnaire as "... an umbrella term for many types of gender variance, including -- but not limited to -- crossdressers, drag queens, genderqueer and transsexuals."

We decided to include definitions of the terms transgender and transsexual in the questionnaire, as not doing so would make any comparison of responses close to meaningless. However, even if we did include such definitions, the responses given may still have been colored by the respondents' existing interpretation of the words. We will explore this problem in our further analysis.

How many are transsexual?

Many gender variant people, as well as researchers and health personnel interacting with them, believe there is a clear boundary between transsexuals and other gender variant people. We will study the data thoroughly to see if it is possible to establish such a divide from our data.

When asking them directly, 24% of the respondents answer that they consider themselves transsexual, as the term was defined by us.

The term transsexual was defined as follows under the relevant question: "Transsexual denotes an individual who seeks, or has undergone, a social transition from male to female or female to male, which in many, but not all, cases also involves a bodily transition by cross-sex hormone treatment and genital surgery." (This definition is based on the text found in the DSM-5 manual).

Because of this we also asked the respondents whether they experienced gender dysphoria.

We defined the term as follows under the relevant question: "Gender dysphoria is a condition where a person experiences discomfort or distress because there is a mismatch between his/her/their assigned gender (also called 'biological sex') and the experienced gender identity."

59% answered yes to this question, 41% no. In other words: More than twice as many reported gender dysphoria compared to those who call themselves transsexual.

We asked:  "If you suffer from gender dysphoria, can you tell us how debilitating it is on a scale from 1 to 5?" 1 was defined as "It does not bother me much", while 6 was described as "It causes me severe distress."

We will come back with a more thorough discussion of how these figures may be interpreted. It seems, however, that as far as our respondents go, the respondents' experience of gender dysphoria varies greatly in intensity.

In our next post presenting preliminary data we will look at how the respondents feel about social and political collaboration between various groups of gender variant people.

Then we will look at the different ways the gender variance of the respondents expresses itself (crossdressing, crossdreaming, use of aliases etc.).

We are also working on a blog post presenting preliminary results regarding romantic and sexual orientation.