On being transgender -- hope and despair

Many transgender people struggle with shame, guilt and self-denial, some to the point of attempting suicide. Monica P. Mulholland's book brings hope to those troubled.

I recommend that you to take a look at Monica P. Mulholland's book Me! The gift of being transgender!

Although the book's main focus is on transgender people who have transitioned or intend to transition, it does cover the needs of the whole transgender spectrum.

There is even a chapter on crossdreaming. Most MTF crossdreamers and crossdressers will therefore find something of interest.

Monica herself courageously discusses the dark side of being transgender, including the pain of gender dysphoria, the fear of social exclusion and the possibility of self-harm and suicide attempts.

Many transgender writers avoid this topic, as they fear that writing about it may trigger destructive behavior. I agree with Monica: We need to bring this part of being trans and gender variant out into the open, and talk about it. That is the only way we can bring trans and queer people out of isolation.

Monica underlines the need to look at transgender feelings:


"Many who misunderstand the Transgender experience seem to lose sight of the word 'feel'. They may speak about the anatomy and endocrine processes, while dismissing the Transgender person's 'felt' experience as 'personal choice' -- rather than as something physiological.

"Feelings are an extremely important part of the human condition -- and especially so when trying to understand, and communicate with, a person who is Transgender. If a Transgender person does not feel known, understood, accepted, loved or included, then barriers to feeling of well-being and self-worth negatively impact their communication with those who are most important to them."

It is often the feeling of rejection that leads transgender kids and adults to conclude that they have no other choice but to attempt suicide.

Research shows that 41 percent of transgender people attempt to commit suicide, and even more think about it, so we are facing some extensive social exclusion and marginalization here.

Suicide also affects the friends and families of these people:


"Suicide does not dissolve emotional and physical pain; rather it transfers the pain and suffering to others -- to a parent, a family, a class, a school, a community."

In other words: The invalidation of transgender identities not only hurt transgender people; it may destroy families and local communities.

I am afraid too many of the conversations I have had with crossdreamers and other trans and queer people have revealed that they are struggling with very dark feelings, indeed. 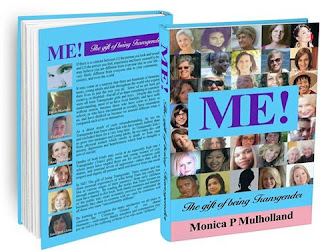 An important part of the solution is to humanize the marginalized person; develop some common ground and the recognition that the transgender person is just a person, like everyone else.

Monica puts it this way:


"It is easy to hate or mistreat a person who is instead understood as a stereotype; however, it is hard to hate somebody when you know their story -- their history, what has happened to them, why they are the way they are... Shared experiences, coupled with respectful listening, allow us to develop interpersonal understanding, and to develop our humanity."

Acceptance from others is connected to self-acceptance, Monica puts it this way:


"Self-acceptance sets us free from our own inner critic, and may deflect the criticism of others. I cannot over-emphasize the importance of self-acceptance -- especially when we are not 'perfect' -- as a way to lead a happier and healthier life."

I readily admit that this is one of my own hardest challenges: To learn how to love and respect myself.

Monica explains that the drive for the "embodiment of the feminine perfection" can drive trans women into despair. Not even cis women are able to live up to these standards, so how can trans women, who are often marked by the effects of testosterone, do so? The answer is: They often cannot. But then again: That should not be necessary.

Monica does not buy the perverted man in a frock paradigm at all:


"We must not kill ourselves by succumbing to the despair inherent in such a dated stereotype. The image of 'the guy who gets off on deviant sexual practices' is an erroneous concept which has been increasingly called into question, and which is already in the process of undergoing its own transformation into a much more positive and accurate concept -- the Transgender woman who has come home to herself."

She is right, of course; the theories of "transvestic fetishism" and "autogynephilia" belong to the dung heap of history.

And as for the transgender woman who has come home to herself: This may also apply to those who have not transitioned. The message here is self-acceptance.

Monica  argues that we should think of the transgender condition as a gift, instead of a curse. I would add that this also applies to those on the non-binary path.

She points out that for many spiritual seekers, the object is to find out who you really are. Monica points out that many transgender people have an advantage here, in the sense that they already know who they are.

I guess you could say that the dissonance between your assigned gender and whatever it is your heart tells you you are, forces transgender people of all variants to reflect on their identity. For cis people it is taken for granted. They do not think about it, and therefore learn less about this side of themselves.


"We can re-frame out situation so that it many become a positive experience, rather than the process of depletion which uses up our energy, and erodes our self-worth. Like the beautiful Lotus flower -- which has its roots in the muddy bottom of a lake or pond -- our flowering as confident Transgender men and women occurs when we doggedly, and with determination, resolve that we are not only our roots, but rather the lovely flower which so many people find worthy of dignity and respect.

"By reaching for the sun, and struggling out of the mud and into the sunshine, we define our aspirations and ourselves, and build our lives upon a growing ability to say, "This is ME! I deserve respect for my humanity and my struggle!"

I like the lotus metaphor, but also because it teaches us that that which appears to be bad and shameful -- the mud -- may actually be the source of what is good. The Buddhists say: "No mud, no lorus". This is especially the case for crossdreamers who are told over and over again that their crossdreaming reflects a sinful nature, a mental illness, a perversion.

Unfortunately, in our cultures anything associated with sex becomes mud in the eyes of bigots, and it is used to belittle and harass those that do not live up to their narrow ideas about what constitutes a perfect, vanilla, sexuality. By facing these dreams transgender people may come to realize that their dreams and fantaises reflect an essential and good part of who they are, regardless of whether they transition or not.

All proceeds from the book is donated to Lifeline New Zealand.

See also: On suicide among crossdressers, crossdreamers and other transgender people