The arguments TERFs and other transphobes use against transgender people these days have also been used against gay and lesbian people.

"Trans-exclusionary radical feminists” (TERFs)  are arguing that trans women are a threat to cis women and children. The tactic is partly to sexualize transgender people, reducing their gender identity to some kind of perversion, and partly to describe them as member of some kind of sinister misguided cult ("transtrenders").

These are  not new types of tactics, historically. They have been used against feminists, people of color, working class citizens and gay men and lesbian women for ages.

So, you might rightly ask why lesbians and pro-lesbian feminists are using the same tactics against trans people, as straight, cis, people used against homosexuals. They have clearly learned nothing from history.

Over at twitter The Implausible Girl has collected a wide variety of newspaper clippings documenting how the arguments used against gay men and lesbian women are now repeated in a transgender context.  I will present some of them below.

The point is simply to document that the TERFs and other transphobes are committing the same crimes against trans people as those that have been committed against gay and lesbian people. And although there may be some people out there who ask legitimate questions about some of the arguments raised by some trans people, it is clear that as far as the TERF activists are concerned, this is not about discussing facts. This is about using any false argument that may force trans people back into their closets, even if that argument has been used against people like themselves.

One typical argument used about trans people is that they are part of a cult that produces propaganda to harm cis people.

The fact is that the transgender movement is not a monolithic culture. There is much variation as regards concepts and ideas about what it means to be trans. However, the idea of a secret cabal or conspiracy is often attractive to people who will not or cannot look into the complexity of real life.

The same argument was used against gay people. 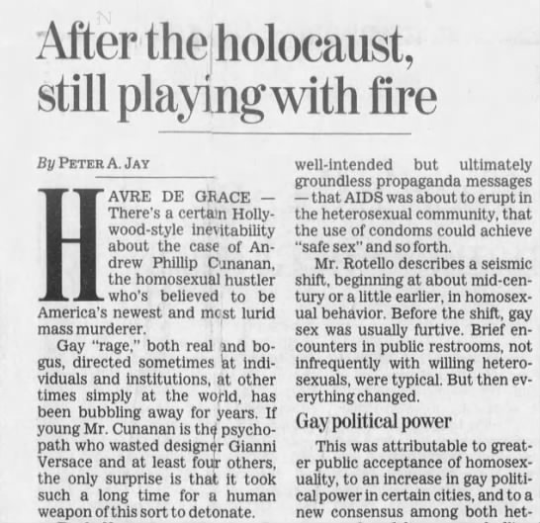 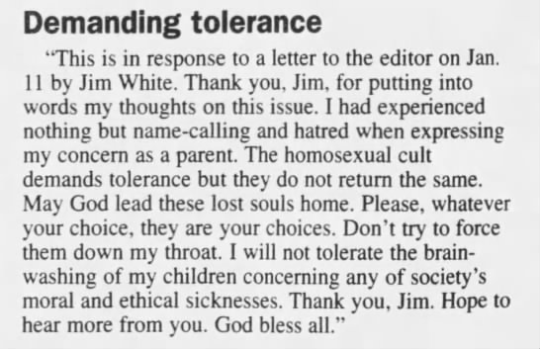 In some cases transphobes and homophobes try to set the "reasonable" trans and gay people up against the "extremists". The reasonable gay and trans people are presumably those that make no demands and live their gay life out of the view of kids and decent women, or – in the case of trans women – who pass with perfection and live up to the proper gender stereotypes.

In the same way trans women are presented as criminals these days, gay men and lesbian women were considered villains in the 20th century.

The fact is, of course, that gay, lesbian and trans people are neither more likely or less likely to take part in criminal activities than those who live up to the cis/heterosexual ideals. People are people, regardless of sexual orientation og gender identity.

"50 per cent of the suicides and murders in America's larger cities can  be attributed to homosexuals," the following piece says. It is amazing what kind of power cis/straight bigots believe gay and trans people have.

Although, to be fair, the suicide rates among trans people are very high (some 40%). They are caused by the kind of hatred we see in statements like these.

Not that homophobes or transphobes will take responsibility for all this suffering, mind you.

"It is grossly unfair and misleading for those who work to win recruits to homosexual practice to blame those who discourage such recruiting for the suicide of homosexuals."

I have actually had lesbian TERFs make the exact same argument against me.

The same tactic is applied to trans people today. If trans people try to live up to the gender stereotypes of the medical gatekeepers, that is taken as proof of them being dishonest.  If they do speak freely about who they are and what they feel, however, that is also used against them.

Basically society is presenting with a double bind, no win, situation. Whatever you do and whatever you say, it will be used against you.

The Oppressor is the Victim Myth

When gay men and lesbian women fought for respect and acceptance, their straight oppressors immediately presented themselves as victims. They were  in their right to harass and invalidate homosexuals, were they not? How dared gay people  accuse them of being insensitive and bigoted? They were only telling the truth! (And so on and so forth...)

These days lesbian TERFs spread the lie that the trans cause is weakening the lesbian cause. By putting one marginalized group up against another they are doing the dirty work of the Patriarchy.

And yes, the argument that “gender ideology” threatens religious liberty is the exact same argument as the one used against gay and lesbian people in the 20th century.

These days we are told that trans kinds are victims of a fad. They are “transtrenders”. The exact same argument was used against gay and lesbian people. 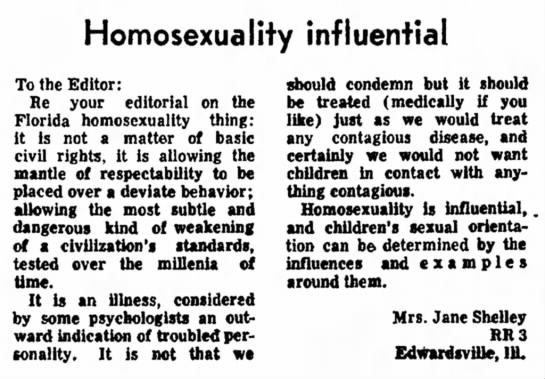 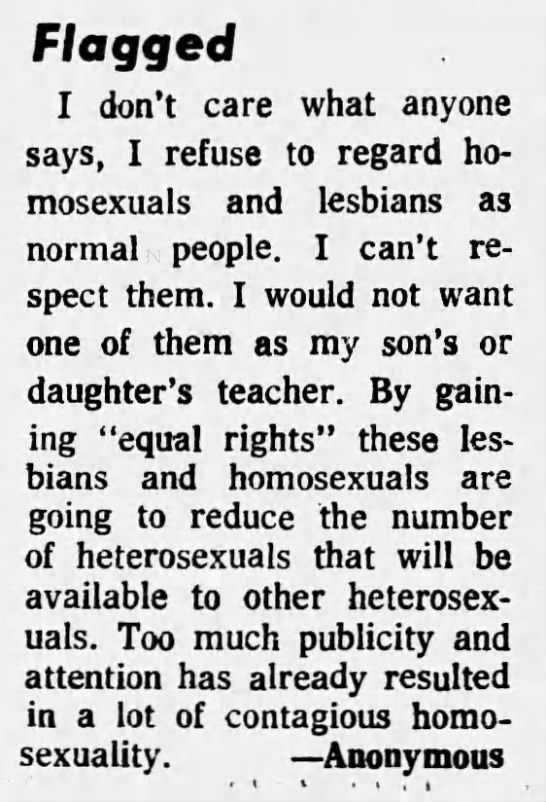 Female rebels used to be called "sluts” and “nymphomaniacs” by the servants of the Patriarchy. Black people had to use separate bathrooms in South Africa and the American South, to “protect” white women and children for irrational, hypersexual, black men and women.

Lesbian and gay people were until recently considered part of an evil conspiracy aimed at turning “decent kids and women” into sexual deviants. Some extremist feel this way about the LG part of the LGBTQA community to this day.


The Courier-Journal (Lousiville, KY) 1975-10-25
The tactic of keeping marginalized people out of public spaces was a tool used against lesbians too.

Note the quote: "I would argue that just the sight of a homosexual working in the locker room is suggestive to the point of making an offensive environment."

This is exactly the same as TERFs say about trans women in women's bath rooms and locker rooms. 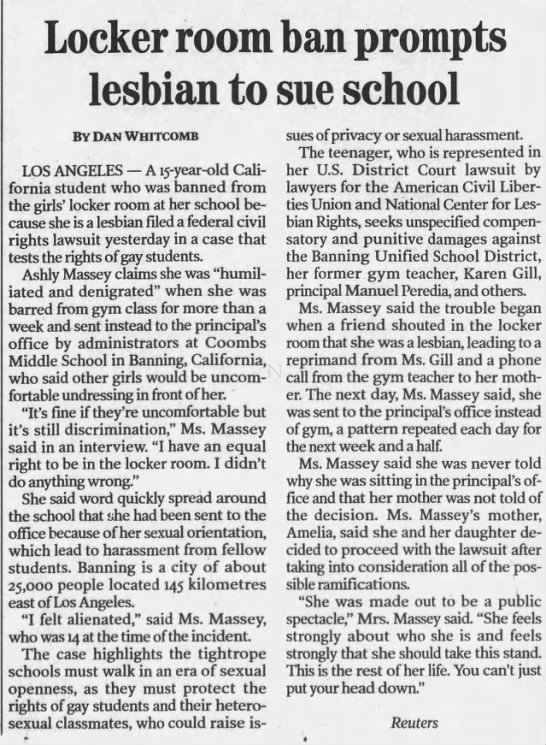 And yes, lesbians, in the same way as trans women, were to be kept out of the military. The following clipping documents how lesbians were thought of as masculine predators, taking advantage of "real women".

The TERFs are portraying trans women in the same way these days. 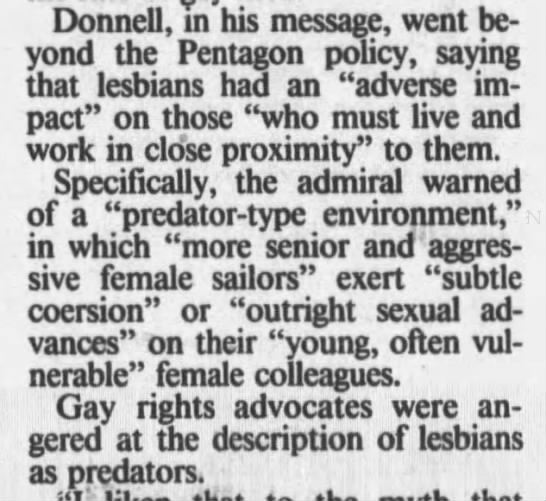 The Binary is Common Sense Myth

People who know little about science or the diversity of religious beliefs seem to think that the sexual binary (we are all born straight) and the gender binary (biological sex equals gender identity) are self evident. Moreover, they think this dogma is supported by science and religion.

Lesbian TERFs, who are themselves victims of this nonsense, are now using this argument against trans people.

Ironically the XY chromosome narrative was used against gay and lesbian people too. The idea was any human being with an XX combination was a woman, and since a woman (because of God, evolution or whatever) was supposed to become a mother, she would have to be sexually attracted to men.

So biological destiny made being a lesbians a sin, aberration or sexual perversion too.

In democracies oppressors have always hidden their bigotry behind the free speech argument. Apparently they think that free speech legitimizes hate speech and violence.

For some reason the argument for free speech is not applied to their victims: gay or trans people.

In spite of the fact that the homophobes controlled large part of the media, the educational system and politics, the homosexuals – who were only defending their right to live a good and decent life – were depicted as the real threat against democracy.

Traditionalists always reject movements for social justice, because such movements have to disturb the balance of power in society. That is the point! 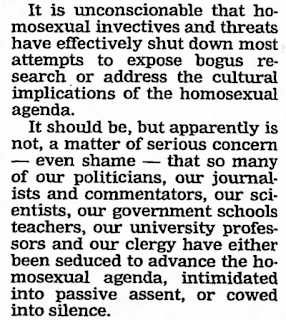 Keeping Lesbians/Trans Women out of the Feminist Movement

It wasn’t that long ago, straight feminists wanted to exclude lesbian women from feminist organizations. 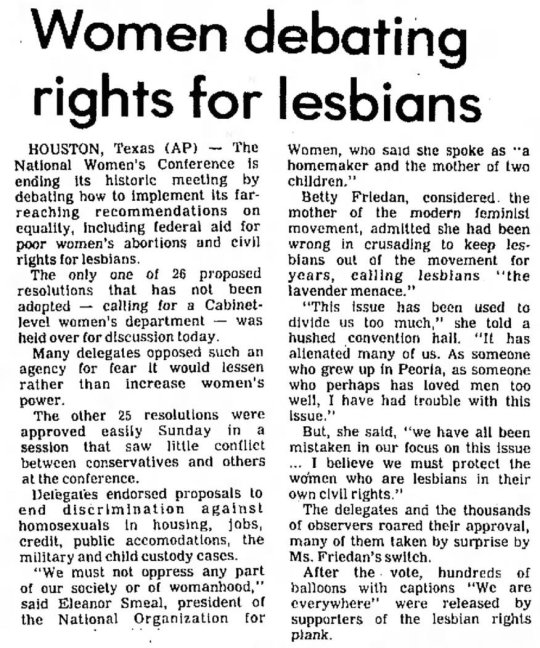 Some straight women feared that lesbians would take over their feminist organizations.
Democrat and Chronicle (Rochester, NY) 1973-02-04

There are trans people who have transitioned that regret doing so, for a wide variety of reasons (less than 2 percent, according to research).  However, the very existence of these regretters and desisters is used to invalidate the identity of those trans people who get better lives after transitioning.

This was an argument used against gay and lesbian people, too. 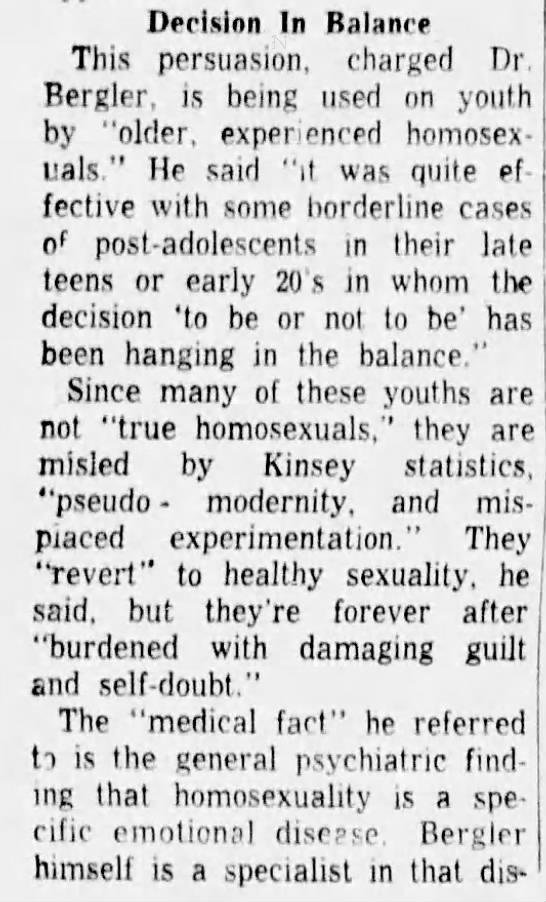 These days lesbian TERFs tells us that more than 80 percent of transgender kids will come to identify as non-transgender. They are mixing up gender dysphoric kids with those who only violates the traditional rules for gender expression, so none of this is true. Still, it is interesting to note that their own identity was invalidated in the same way. 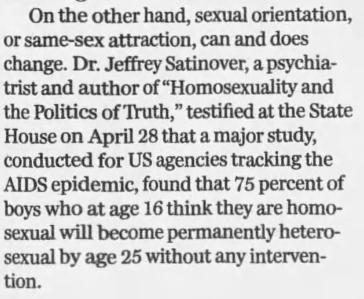 The following review of the British tabloid The Sun, presented by The Guardian back in November 1998, may serve to sum up this post:


And as for the main illustration at the top: 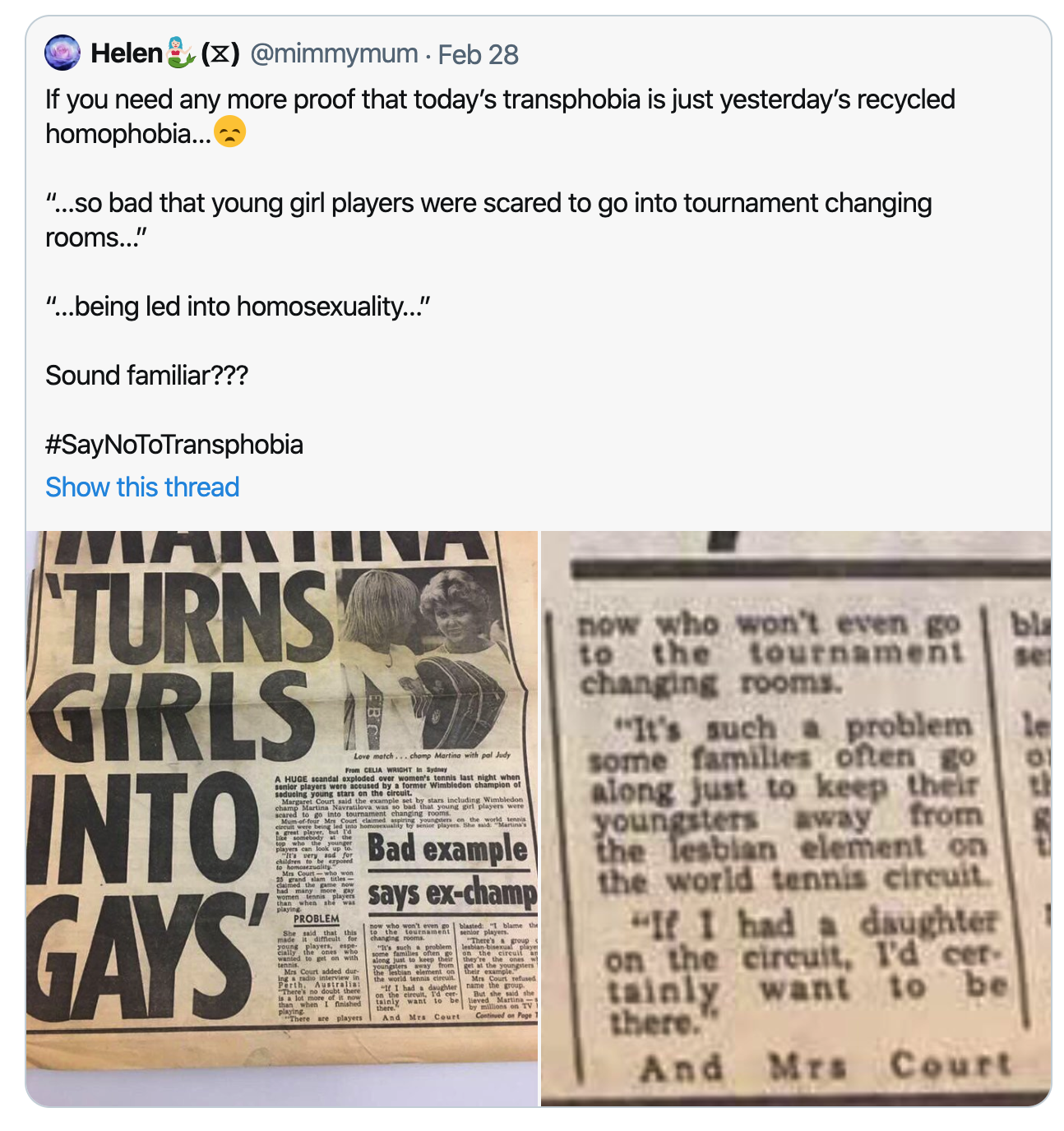