This article discusses the sample and the methodological choices made for the Crossdreamers survey of gender variance. 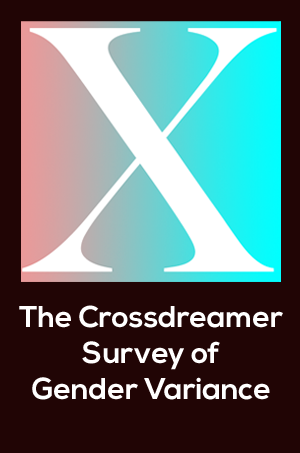 This text is still being edited.

The Crossdreamer Survey of Gender Variance was carried out online between August 18 and September 2 2014.

The objective was to learn more about gender variance and people who find themselves outside the expected norms for gender expression and gender identity, including -- but not limited to -- crossdressers, crossdreamers, drag queens and kings, genderqueer, queer, transgender and transsexual.

The study was based on two separate questionnaires:

We suspected that the groups reached via questionnaire 1 would be dominated by adults and people assigned male at birth. We therefore distributed a separate questionnaire via Tumblr. Tumblr is a social site dominated by teenagers and people in their early twenties. Tumblr is also popular among younger people assigned female at birth (56% female users in February 2013).

The two questionnaires were identical, with one exception. Questionnaire 2 had two additional question, including one regarding the relationship to parents.

The invite for questionnaire 1 was originally published on Crossdreamers.com (8800 unique visitors monthly) , Crossdream Life, the Crossdreamer reddit forum. Contacts made it know in a large number of Facebook forums. T-Central, a major portal for transgender put up a separate blog post. It was also posted in the reddit genderqueer subreddit. The link to the study was also posted on Twitter, Facebook and Google+, but we have no way of identifying them all.

The invite to questionnaire 2 on Tumblr was originally posted on a tumblr blog called XD Express. XD Express is covering a wide variety of queer, transgender and LGBT issues, far beyond crossdreaming. The blog had at the time some 1500 registered Tumblr followers. The number of readers outside the tumblr community is not known.  The XD Express invite was reblogged 104 times, i.e. it was published on 105 different tumblr blogs. It should be noted, though, that these posts would often be  shortened versions of the original text. The rebloggers might also add a comment of their own. We have no knowledge of this invite being distributed outside tumblr.

There are no perfect questionnaires. The complex relationship between the hermeneutics of the one making the questionnaire and the one responding makes this a certainty. It is hard to foresee how the respondent will interpret the terms used or the intention behind each question. We also know that the terminology used in one question may color the replies given to other questions further down. Finally, respondents may sometimes try to adjust their responses to what they consider socially acceptable, which is a serious problem for controversial issues like gender variance and sexual behavior.

To give one example: Although we stick to the dominant definition of "transgender" (as an umbrella term for different types of gender variance), there will be respondents who would say that it means "gender dysphoric" or the same as "transsexual". Some respondents will not know of the discussion surrounding this definition at all, and base their interpretation on whatever media coverage they might have been exposed to or private conversations they have had. Even if we define the term clearly in the questionnaire (as we have done), their original interpretation of the word may subconsciously influence their responses.

In order to reduce biases introduced by such effects, we took the following precautions:

In line with this we also deliberately opened the questionnaire to all people.  It should be noted, though, that we did not set out to map gender atypical interests among cisgender men and women in general. However, we did not stop people who think of themselves as cisgender or non-transgender from replying, as we knew that many of them do experience gender variance of a kind that makes them fit within common interpretations of terms like gendequeer and transgender. Indeed, one of our objectives was to see to what extent gender variant people may identify as cis.

Nor was the intention to study the lives of transsexual men and women who have transitioned. They face challenges that lie far outside the scope of this study, and if we had decided to include those issues, the questionnaire would become too long and too complex. Because of this we have received a few complaints from transsexual respondents who felt that the terminology used did not fit their current life experience. This especially applied to terms like "cross-gender" and "crossdressing."

When we finally did introduce terms like "transgender", "transsexual" and "gender dysphoria" in the questionnaires, we provided the respondents with clear definitions. For many of the issues covered we included alternative questions further up that would cover some of the same ground, but without using the same controversial terms. This applies, for instance, to our questions about the need for social and political transgender alliances.

We also made sure that questions regarding gender assigned at birth, age and geographical location were introduced near the end of the questionnaire, as such questions may set respondents into a frame of mind that makes them respond in a particular manner.

In the invite and in the questionnaire itself we made it explicitly clear that we would not ask for any information that could be used to identify respondents. This reduces the possibility of respondents trying to "please" by answering in a what they believe in a socially acceptable manner. This was probably also why we managed to generate such a high number of responses.

The combination of one survey addressing predominantly male to female communities and another one dominated by female to male gender variant people means that we have managed to achieve broad coverage, both as regards assigned sex, experienced gender and age.

Given that we wanted to reach a wide variety of gender variant people, some have criticized us for not including transsexual men and women.

We would argue that this cohort is well covered. We did reach a significant number of gender dysphoric people, as 853 out of 1199 reported some form of gender dysphoria. On a scale from 1="It does not bother me much" to 6="It causes me severe distress", 30 selected the most severe degrees (4 and 5). Severe gender dysphoria is by many considered a precursor for transsexuality.

24% of all respondents considered themselves transsexual (we gave them a definition of transsexual in line with the DSM-5 manual).

The fact that the surveys were promoted via English language sites and forums, using an English language invitation, has caused a strong bias towards North American (73%) and European respondents (20%), however. This is in no way unusual in surveys of transgender and genderqueer people, but a problem all the same.

We concluded that we did not have the resources needed to translate the questionnaires into more languages. Besides, translating the terms used in our questionnaires is a difficult task, as different cultures may be dominated by different mental maps of sex, sexuality and gender.  This is also reflected in terminology and the interpretation of key terms. A broader, global, survey is needed, but requires an international collaboration of researchers and gender variant people.