The existing transphobic cultural system of oppression thrives on the idea that there is a clear gender binary, where real men watch football and women wear lipstick. To be accepted into world view, you'd better spend a lot of time and money trying to live up to the stereotypes.

Needless to say,  nonbinary and transgender people often find it harder to live up to the expectations. The demand to "pass" as a "real" woman or man is stricter for them. Not only are they supposed to look the part. Their motives should be pure, and their feminine or masculine behavior impeccable. 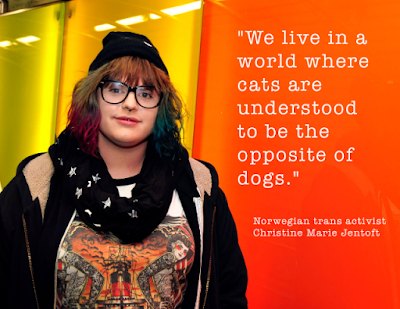 Most trans people, including those who fully identify with their target gender, realize that gender is not a strict binary, and that this applies to both transgender and cisgender people.

Some, however, have adopted the conservative views of the peers and their parents, and therefore insist that this is simply a "female brain trapped in a man's body" issue. Those who explore the shades of purple or who – God forbid! – get aroused by the idea of being their real gender, are dismissed as "transtrenders", "tucutes" or sexual perverts.

These are the modern transgender separatists, trans people who think they are too good for the wider transgender community. They call themselves transmedicalists or truscum (the latter is a term they have appropriated from their opponents.)

Here are some of the posts on Trans Express that explores the truscum controversy.

On this site:
Truscum and the Transgender War of Words
Survey of truscum transsexual separatists