Julia Serano on the transsexual separatists and crossdreaming 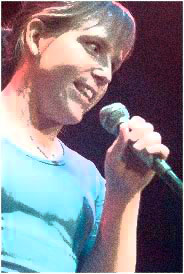 Those of you who have followed the transgender vs. "true" or "classical" transsexual debate, should take a look at Julia Serrano's recent article in the Transadvocate, and her following comment over at her new blog.

Serrno is probably one of the most influential transsexual activists in the USA today, and yes, she supports the transgender alliance of crossdressers, gender queer and transsexual people.

"...I have mostly avoided this debate because of the name calling, disparaging stereotypes and nonconsensual sexualization that are sometimes associated with it. But recently, I read a post where someone referred to me as being firmly in the 'transsexual' (rather than “transgender”) camp. This was the second time that I had seen such a claim, and frankly, it surprised me.


"Granted, in my book Whipping Girl, I argued that the transsexual experience is different from other transgender trajectories, and I also decried the manner in which some cissexual gays and lesbians appropriate transsexual identities.


"But I never once advocated that transsexuals should completely split off from the transgender or LGBT communities. Rather, my intention was constructive criticism – I hoped to make those alliances more aware and respectful of transsexual voices and perspectives

"So, for the record, I am in the pro-umbrella camp, even though I acknowledge that sometimes umbrella politics are messy and less than equitable. In other words, I believe that the pros of umbrella politics outweigh the cons."


Why this is important

There are separatist transwomen who make serious, coherent and constructive arguments for why they do not want to be part of a movement that encompasses crossdressers, gender queer and homosexual people. They often argue that (1) they have nothing in common with homosexuals and (2) that they refuse to be forced into a club that do not fit their needs.

Fair enough. I am not going to repeat the arguments for why it makes sense to have an umbrella term here. I think Serano explains this well. But these arguments made by the constructive members of the separatist side are definitely legitimate.

Still, it seems to me that the majority of separatist bloggers and commentators are not against the transgender and LGBT umbrellas out of purely democratic or pragmatic reasons. They are against it because they do not want to be associated with people they basically despise. There is a lot of homophobia in these circles, and also misandry; but most of all there is a deep contempt for crossdressers.

Crossdressers are routinely accused of  being sexually obsessed perverts. They are considered men who harass women online and  in women's restrooms (sic!). It is therefore extremely important for these activists to explain that crossdressers and "autogynephiliacs" have absolutely nothing in common with post-op transsexual women.

As I have argued before, there is a huge difference between the male to female crossdresser who lives as a man and a transsexual woman. A large number of M2F  crossdressers and queder queer identify with their birth sex. They do not claim to be women, and should not be treated as such.

But there is one extremely big elephant in the room that these more vocal separatist do not want to acknowledge,  and that is that a large number of transwomen have a crossdresser/crossdreamer past.

This is why the Serano article is so important. Serano is a transsexual activist who not only acknowledge that the elephant is there. She does not hesitate to talk about it.

Serano on crossdressing and crossdreaming

I have a large number of blog posts in the pipe line, and one I haven't been able to finish is a post about Serano's book The Whipping Girl.

This is bad, because Serano is one of the very few transsexual writers who have discussed the relationship between crossdressing and crossdressing on the one hand and transsexualism on the other.

I her book she says:

"For a while, I thought of myself as a crossdresser and viewed my female subconscious sex as a 'feminine side' that was trying to get out. But after years of crossdressing, I eventually lost interest in it, realizing that my desire to be female had nothing to do with clothing or femininity per se. There was also a period of time when I embraced the word 'pervert' and viewed my desire to be female as some sort of sexual kink. But after exploring that path, it became obvious that explanation could not account for the vast majority of instances when I thought about being female in nonsexual context."

After a phase living as the androgynous queer boy in the eyes of the world, Julia eventually reached the conclusion that her female subconscious sex had nothing to do with gender roles, femininity, or sexual expression. It was, as she puts it, about the relationship she had with her own body. Which is why she decided to transition.

All of this means that Serano does not fit the traditional separatist enemy image.

Like them she demands respect for being a woman, not gender queer, a member of a third sex or a crossdresser. Like them she believes that her condition has a biological, inborn, core.

On the other hand she finds the transgender umbrella both intellectually and politically useful, and -- using her own life as an example -- she argues that many male to female crossdressers and crossdreamers may be women at heart.

In other words: She breaks down the absolute distinction between crossdressers and crossdreamers on the one hand and transwomen on the other. That makes Serano relevant for crossdreamers as well.

I strongly recommend her book to all crossdreamers who struggle with their gender identity. And if a book is too much for you, do at least read her article.

To me her conclusion as regards the solution to the current separatist wars is sound and wise. She says:

...we should respect the diversity of identities, sexualities and life histories that exist among those of us on the trans female/feminine spectrums. We should recognize that many transsexual women have been, or currently are, crossdressers, drag performers, androgynous, butch, or genderqueer-identified—such life experiences do not make a person any less transsexual.

"Furthermore, cissexual women vary in their sexualities and identities, so we should expect transsexual women to vary in these respects too. Heterosexual transsexuals should stop trying to convince the world that all transsexuals are straight and want out of the LGBT umbrella. Similarly, queer-identified transsexuals sometimes play up the idea that transsexuality is inherently subversive and super-duper-queer in order to gain acceptance within queer circles (I should know, as did quite a bit of that during the first two years after my transition)—this erases the life experiences of our straight-identified trans sisters."

From "transgenderist" to "transgender" - on Virginia Prince and crossdresser separatism
When Four Tribes Go to War
The Harry Benjamin Syndrome
See also this rather constructive discussion over at TS-SI.
Posted by Jack Molay