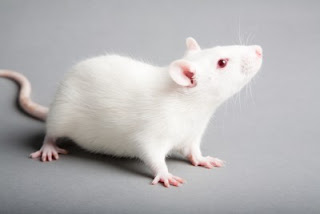 In these experiments the researchers are looking at pretty simple behavioral dimensions. Still, even these dimensions add up to an amazing complexity:

"Scientists have long suspected that sex hormones ultimately influence gene expression in the brain. About six years ago, Shah and his colleagues set out to find such genes by using DNA microarrays, a routine laboratory assay, to analyze sex differences in gene expression in the hypothalamus, a region of the brain known to be involved with hormone sensing.

"They found 16 genes that were expressed differently between males and females in the hypothalamus and showed that such differences were regulated by sex hormones. But in identifying these 16 genes, Shah and his colleagues also discovered they could tease apart classic, male and female hormone-driven behaviors into individual elements—each governed by its own genes." (...)

Shah & Co compares the sexual behavior of mice to a  main electrical box with many breaker switches. Male and female behaviors in mice are actually made up of many behaviors, like sex drive or an inclination to fight.

Shah and his colleagues were able to turn off genes with drugs and by other means. They found that they could selectively knock out some male behaviors so that males continued to fight and mark territory normally, but altered their mating routine with females. Likewise they could modulate female mouse behaviors to make them maintain active interest in sex but spend less time caring for their young.


In the case of humans you would have to add cultural and social factors to this mix, which would -- of course --  make the number of variables mindbogglingly large. Still, if you do so, you end up with a model that is very close to the slider model presented by Natalie and myself.

In other words: In humans male and female behavior cannot be reduced to one and only one combination of traits and behaviors, and because of this it is also impossible to develop one "ideal" stereotypical model of how a woman or a man (trans or not) ought to be.

Sexual orientation is, for instance, separate from mating behavior (the copulatory instinct) and -- in the case of humans -- from a sex identity.

(I have no idea of knowing whether a mouse has a sex identity.)

It should be possible, though, to identify a core of genetic and/or hormonal triggers that might lead to the development of a transgender condition.

And as several such triggers exist, the idea that a transwoman is "a woman trapped in a man's body" may make sense. But we would also have to accept that there are people out there with a mix that makes it close to impossible for them to identify with one gender only.

For more on Shah, see my post On hormones, gender, mice and men. 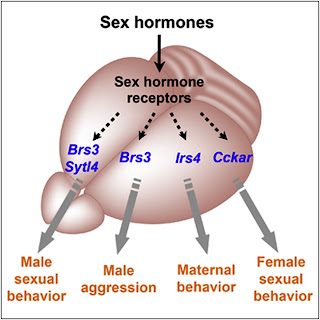 "Sex hormones such as estrogen and testosterone are essential for sexually dimorphic behaviors in vertebrates. However, the hormone-activated molecular mechanisms that control the development and function of the underlying neural circuits remain poorly defined.

"Indeed, we find that mice with targeted disruptions of each of four of these genes (Brs3, Cckar, Irs4, Sytl4) exhibit extremely specific deficits in sex specific behaviors, with single genes controlling the pattern or extent of male sexual behavior, male aggression, maternal behavior, or female sexual behavior. Taken together, our findings demonstrate that various components of sexually dimorphic behaviors are governed by separable genetic programs."
Posted by Jack Molay