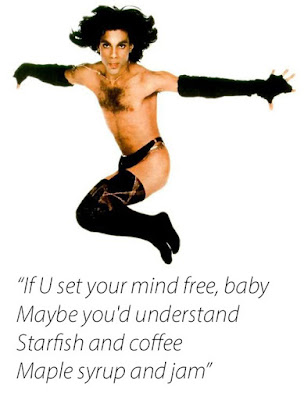 
Mind you, I am glad this is the case, but I am curious as to what causes this immunity to the curse of so many gender variant and transgender people: The accusation of being some kind of sexual freak.

You  would think the supporters of theories that invalidate transgender people (and I use the term transgender in its wide umbrella sense of "gender variant" here) would feel compelled to use this blatant example of crossgender eroticism as their prime example of a "paraphilia", but no.

In "Tamborine" he asks his female partner about what it feels like to be her:


Oh my God here U are
Prettiest thing in life I've ever seen
Close my eyes what's it like,
What's it like inside your tamborine?

In "If I Was Your Girlfriend" (full lyrics over at CDL) Prince presents the common MTF crossdreamer fantasy of being allowed to be a woman among women, opening the song with a shop assistant calling out to the female customers: "Look at the bargains over here, ladies..." followed by a snippet of bridal music.

He is looking for the kind of female intimacy that his role as a man denies him: 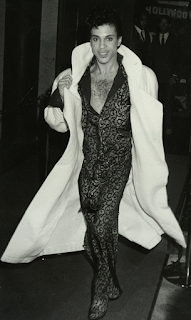 He wants to help her pick out her clothes, wash her hair, make her breakfast. "Could we go to the movies and cry together?" he asks, and paints a picture of them being lesbian lovers, and he taking on the role of a woman:


Of course I'll undress in front of U!
And when I'm naked, what shall I do?
How can I make U see that it's cool?
Can't U just trust me?
If I was your girlfriend U could
Oh, yeah, I think so
Listen, 4 U naked I would dance a ballet
Would that get U off?


This is not the only song where he touches upon some kind of gender fluidity:

"If I gave you diamonds and pearls, would you be a happy boy or a girl?" he asks in "Diamond and Pearls".

He also playfully switches gender roles in movies and videos.

This is very clear in the video for the superhit "Kiss", where Prince dances around Lisa (one of the lesbian members of his band The Revolution) in a seductive feminine manner, singing in a high falsetto voice.

She sits still and composed, doing "the man's job", if we are to live up to the stereotypes. The gender bending is accentuated by Prince letting the female dancer "sing" the more manly part of the verse.

Lisa Coleman and her friend Wendy Melvoin are the ones who have most clearly commented upon Prince's female side.  In an interview with Out they give us the following amazing series of quotes:


Lisa: He was little and kinda prissy and everything. But he's so not gay.

Wendy: He's a girl, for sure, but he's not gay. He looked at me like a gay woman would look at another woman. 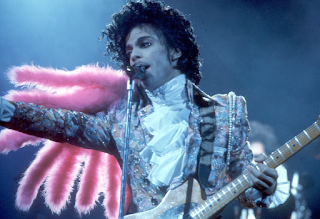 Wendy: I remember being at that Sexuality video shoot and him on stage with that little black jacket and that tie thing around his neck and his black pants with white buttons on the side.

And we looked at each other for the first time and I thought, Oh, I could so fall in love with that girl easy. It doesn't matter what sexuality, gender you are. You're in the room with him and he gives you that look and you're like, Okay, Im done. Its over. He's Casanova. He's Valentino.

Was Prince transgender in any sense of the term? His interview on Ophra seems to indicate that he was, but I haven't found any other references to him saying so.

Many male to female crossdreamers of the gynephilic, woman-loving, persuasion will often questions their sexual orientation, over and over again, as the fantasies of switching the typical gender roles in bed -- as in being the bottom instead of the top -- is immediately associated with being "gay". Internalized homophobia may make this a problem for some, at least for a time.

I do not sense much homophobia in Prince, at least not before he became a member of Jehova's Witnesses (even if he in one song fantasizes about turning a lesbian woman around).

But he does question his own sexuality, while at the same time celebrating the diversity of gender and sexuality.

"Am I black or white, am I straight or gay?" he asks in "Controversy". 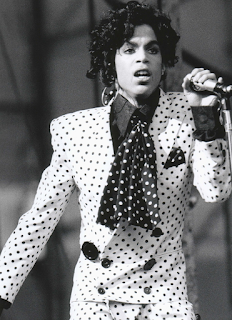 
"She saw me walking down the streets of your fine city It kinda turned me on when she looked at me and said, "come here". Now I don't usually talk to strangers but she looked so pretty  What can I lose, if I, uh, just give her a little ear? "What's up little girl?" "I ain't got time to play." Baby didn't say too much. She said, "Are you gay?" Kinda took me by surprise, I didn't know what to do I just looked her in her eyes and I said, "no, are you?" Said to myself, said "She's just a crazy, crazy, crazy little mixed up dame. She's just a victim of society and all its games." Now where I come from we don't let society tell us how it's supposed to be. Our clothes, our hair, we don't care. It's all about being there. Everybody's going uptown. That's where I want to be."

There is no doubt that Prince loved women, so if his sexual orientation was ambiguous, it was as a bisexual or polysexual.

Which brings me back to the original question: Why hasn't Prince been used as an example by those who wants to reduce crossdreaming and gender variance among male to female crossdressers and transgender people?

I suspect that it has something to do with what Wendy alluded to in the quote above. Prince was an extremely attractive man, to the point of making a lesbian woman admit as much. Straight women flocked around him, at the same time as he managed to become a bit of a gay icon.

The stereotype of the woman-loving male to female crossdresser and crossdreamer, however, stipulates that he has to be some kind of unfeminine and unattractive "man in a frock", the kind of image transphobic bathroom billers in the US try to paint in order to keep trans women out of public restrooms.

This is the stereotype presented by those promoting the "autogynephilia" theory as well.  The only male to female transgender people who can be even remotely feminine or sexually attractive are the androphilic, man loving, trans women or -- as Ray Blanchard and J. Michael Bailey so insultingly call them: extremely effeminate gay men.

The male to female "non-homosexual" transgender "man" is an evolutionary dead end, according to this theory, a man lost -- in love with his inner woman -- without much interest in women "out there" -- again according to Blanchard.

People like Prince, as well as other straight or bisexual male rock and pop stars who have flirted with gender variance or who express some kind of femininity, are ignored by transphobic scientists and activists because they prove that "androgyny" or being genderqueer or some shade of transgender does not necessarily make you uninteresting in the eyes of straight women. It may, in fact, make you more attractive.

I suspect that is why they do not mention people like Prince, David Bowie or Freddie Mercury, because their example messes up the whole mental map of the scientists lost in the pathologizing version of the binary.

There are many reasons why the work of Prince is important in a gender and sexuality setting, and this is one of them: He was a living proof of the stereotypes being exactly that: Stereotypes.

See also: Prince's legacy in the context of trans history

Thanks to Uli and Lost. Main photos from the New York Times.

See also:  Christina Cauterucci on "How Prince Led the Way to Our Gender Fluid Present"
Marcus Patrick Ellsworth: "Words of Liberation, Prince's Lyrics and Queer Identity".
Pence Kornhaber: Prince: "Gay Icon, Whether He Wanted to Be or Not"
Zeba Blay: Prince’s Revolutionary, Complicated Relationship With Black Masculinity
Alyssa Rosenberg: Mourning Prince and David Bowie, who showed there’s no one right way to be a man
Posted by Jack Molay