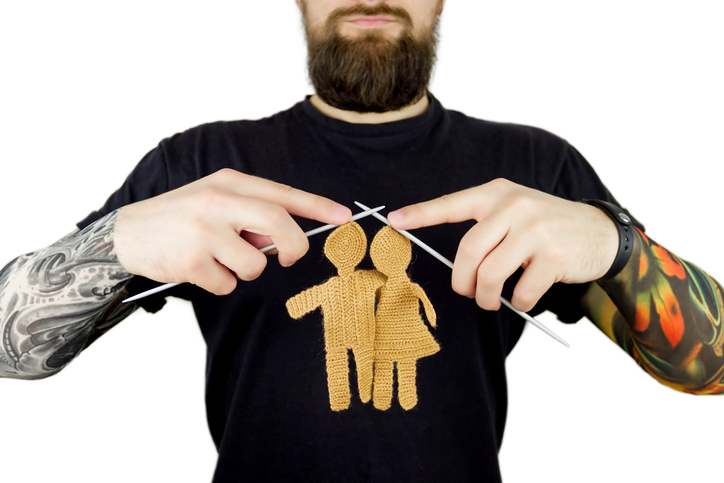 What a friend taught me about how we all play along to let the gender stereotypes govern our lives.

A month ago I posted a comment on my "real life" facebook account about similarities between Nordic knitting patterns and neolithic chevrons, wondering what they both expressed something about our subconscious minds.  (Yeah, I am a nerd. Deal with it ;-) )

I think it was the accompanying photo of a Norwegian sweater that made a friend add the following comment:


"So you have started knitting now?"

I believe there was a smiley involved. I cannot remember.

That sentence got me thinking.


There are three possible interpretations:

If he had been a woman, I would have gone for alternative 1. But since he had shown no interest in tricotage before (or for any stereotypical "feminine" hobby for that manner), I doubt very much he was looking forward to discussing the sizes of knitting needles with me.


He is basically a good guy, so I doubt he was trying to harass me.

This leaves us with the third option: This was a friendly joke, where he was making fun of my strange interest in knitting, but where he could not even contemplate the possibility that I had actually started knitting (which would have been be a real violation of the pact of masculine brotherhood).

This kind of man to man jokes are meant to affirm the male identity of the two men involved. It is the potential gender boundary violation that is supposed to make such jokes funny.

This tells me that straight, heteronormative guys are secretly drawn to gender boundary violations, so they need to relieve the accompanying nervous energy by laughing at what i would call SD2P  ("Sitting Down To Pee") jokes.

But what made his comment particularly interesting to me, is how the joke illustrates the subtle and implicit ways our culture disciplines and conditions boys and girls to live up to gender stereotypes and gender roles. Because even if he did not want to bully me, his words would have had the same effect as bullying if I was in fact knitting.

Remember that this kind of "friendly bullying" is present all the time in male communities. It is an essential part of male bonding. These jokes reinforce the misogyny and the fear of social exclusion found in these circles. And they hit those who truly are gender variant the hardest.

In the discussion of transgender lives, there is a focus on the difference between those who act like their true gender in childhood and those who try to live up to their assigned gender, often referred to as "early onset" versus "late onset" transgender people.

Given the force the cultural gender conditioning has, the real mystery is not the trans women who join the Navy Seals before giving up their male lives. The true mystery is the ones who manage – against all odds – to express their true gender in face of all the jokes and the harassment.