A new US study of changes in people's attitude towards homosexuals, tells us how trans people may gain recognition and acceptance 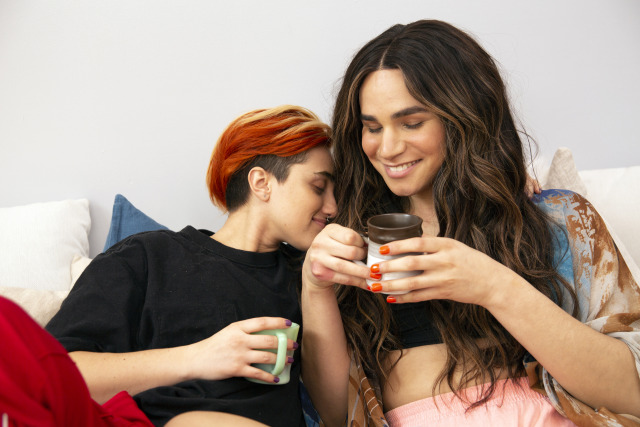 In the US people's attitudes towards gay and lesbian people have changed dramatically, and in a positive way. It turns out it is much harder to dehumanize sexual variation when people meet gay, lesbian and bisexual people in the workplace or among friends. In other words: The more gay and lesbian people straight people have meet, the less likely they are to be homophobic. It is a fair guess that over time the same will apply to the attitudes towards trans people.

Support for same-sex marriage has increased among nearly all demographic groups, across different generations, political and cultural divides and religious faiths.

In The Washington Post Samantha Schmidt argues  that the main reason for this reversal is that gay and lesbian people started to come out in great numbers. At the same time gay and lesbians became much more visible in the media.


Explicit attitudes towards homosexuality are changing

She refers to a new study by psychology professor Mahzarin Banaji of Harvard. In the paper "Patterns of Implicit and Explicit Attitudes: I. Long-Term Change and Stability From 2007 to 2016," he and Tessa E. S. Charlesworth report that what they call "explicit sexuality attitudes" – i.e. self-reported attitudes – has had the largest overall change of any explicit attitude in the US, moving toward neutrality by approximately 49% since 2007.

Implicit attitudes are evaluations that occur without conscious awareness. These have been considered close to unchangeable by many. However, this research shows that implicit sexuality attitudes  has had the most substantial overall change of all implicit attitudes, moving in the same direction as the explicit, but at a slower rate  (changing toward neutrality by 33%).

Love was in place


But there was something different about the gay and lesbian community, compared with other minority groups. They were in every socioeconomic and racial group, every generation, in small towns and big cities. Unlike other demographics, “sexuality is a dimension that is everywhere,”  Banaji said. “It is not segregated.”

The more connections Americans made with gay or lesbian people, the more positive their attitudes toward them became — a trend social scientists call “the contact hypothesis.”...

What might be different about the gay community, Banaji speculated, is that even before a person came out, “love was in place.” A parent or a co-worker already knows and loves a gay person, and then discovers a person’s sexuality, which is often not obvious right away. “That, I think, is very different from something like age, or race, or body weight that just presents itself immediately upon seeing a person for the first time.”

This is an important lesson for the T part of the LGBTQA community. One of the reasons transphobes – being those radical feminists or right wing fundamentalists – are panicking about trans people and trans kids right now, is because trans people are becoming more visible and more accepted.

Even if we do see examples of TERF and right wing “Christian” women invalidating their own children, more and more parents come out fighting for their trans kids, protecting them against the bigots who attack them.

It is so much harder to demonize and pathologize someone you know, and someone who who is clearly loved.

Let me also add that this study teaches us a lesson about internalized homophobia and transphobia.

Throughout the last ten years or so I have spent a lot of time debunking the traditional, invalidating, narratives about homosexuality, gender roles and gender variance. The reason I have done so is that I have met so many crossdreamers and transgender who people have adapted these narratives in order to make sense of their lives. By doing so they have also internalized the message that they are mentally ill "fetishists" or "autogynephiliacs".

Some are even more afraid of being gay than being trans, which is a clear sign of them having been raised in a very sick culture, indeed.

I can see now how the younger generations are less likely to fall into these traps than the baby boomers, most likely because they have grown up in a more tolerant society. They know queer, nonbinary and tras people personally. They also have alternative narratives that help them make sense of their lives. They are not forced to drink the toxic stew of 19th century sexology and theology.

So in spite of Trump, Putin, European Fascists,  "trans exclusionary radical feminists" (who are neither radical nor feminist) and "Conservative Christians" (who are neither Conservative, nor real Christians), I am actually an optimist. When people's implicit attitudes to sexual variation and gender variation becomes "normalized" (to use the words of the researchers), the battle will have been won.

This article is based on a post originally published over at Trans Express.
Posted by Jack Molay