The third part in a series about sex, gender and nature. In this post I look at the strange world of transgendered animals. 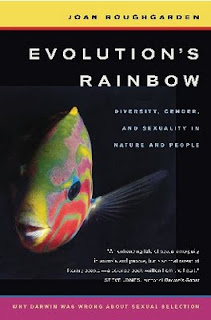 In her book Evolution's Rainbow (2004) Roughgarden has a separate chapter named "Multiple-Gender Families" which really took me by surprise.

I had heard the "Discovery Channel alpha male scaring the others males away" story so many times that I had come to believe that there are only two "genders" in the animal kingdom: male and female.

I need to make a little detour here. "Gender" is often understood to be the "socially constructed roles, behaviours, activities, and attributes that a given society considers appropriate for men and women." (WHO) Hence gender differences are defined by culture, sex differences by biology.

Roughgarden, however, is a biologist - not a social scientist - and in her tradition it is possible to use the word gender to denote the physical basis for the behavioral differences between males and females.

Roughgarden needs the term gender in addition to the term sex, simply because many animals have several variants for one or both of the two sexes!

This came as a total surprise to me. How is it possible than no one has ever told me this extremely important fact before? The answer, of course, is that it does not fit well with the sexual selection theory.

So what does "multiple gendered animals" or "within-sex polymorphism" mean?

Roughgarden explains it this way:

"Males and females in a species may come in two or more sizes or colors. The morphological [pertaining to the form, structure and configuration of an organism] differences are the tip of the iceberg.

"The two morphs [i.e. gender variants of a sex] approach courtship differently, have different numbers of mates, have different arrangements of between-sex and same-sex relationships, live different life spans, prefer different types of real estate for their homes, exercise different degrees of parental care, and so on." (2004, p. 75)

Here are a few examples:

There are hundreds of known fish species that have two distinct types of males. The Californian singing fish (Porichthys notatus), for instance, have one large and one small type of males. The large type defend territories and guard eggs. A large male guards a big collection of eggs laid by several females. The small male defend no territories. They dart in to fertilize eggs laid in the large male's territory. (p. 77)

Male red deer or elk (Cervus elaphus) has a secondary type of males that have no antlers. They may at times be more successful at mating, according to Roughgarden (p. 78).

The North American bluegill sunfish (Lepomis macrochirus) has no less than three male genders, of different sizes and different colors and markings. The large males try to repel the small ones from their territories. The females spawn readily with the small males while the large male is busy with all his chasing (p. 80). The medium sized males may be schooling with the females. Roghgarden continues: 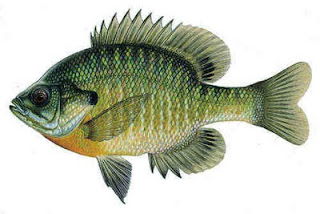 A popular way of explaining away this strange phenomenon is to say that the medium male deceives the large one into believing he is a female.

But, as Roughgarden points out, this is the male chauvinist talking. Sunfish have great eyesight, and the medium "feminine" male may be similar to females, but they are not identical.

An alternative theory is that two males may defend the territory in a better way than one, and the females appreciate this.

"A female might wonder if she will suffer domestic violence from this male who's trying to look big and powerful...Perhaps the courtship between the large male and the medium male offers the female a chance to see how the large male behave with a feminine-looking fish who is slightly smaller than she is." (p. 84)

White-throated sparrows (Zonotrichia albicollis) of Ontario have two male and two female genders! In both males and females the white-striped individuals are more aggressive than the tan-striped individuals. Still, they can all find mates.

Not to be outdone the side-blotched lizard (Uta stansburiana) from the American Southwest has three male types and two female.

Just a few kilometers from where I live now, you will find the pied flycatcher bird (Ficedula hypoleuca). Males vary from striking black and white to brown.

I have taken the liberty of reproducing a Russian drawing of the bird. Note that there is nothing here to signify that this bird violates the rule of having two genders. Indeed, the superiority of the male is displayed by the fact that there are no less than four drawings of the "normal" male, one of the female and none of the "feminine" male. 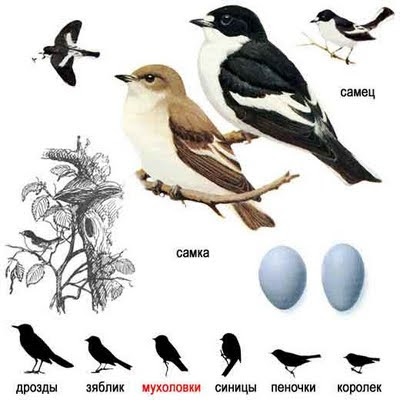 Roughgarden presents a Norwegian experiment where male flycatchers who had set up territories were presented with individual caged birds to see if they could distinguish the sexes:

"A territory-holding male who hadn't already attracted a female reacted to a female by showing off the entrance to his hole and calling enticingly. When the same male was presented with a macho black-and-white male, he was not so hospitable, and jumped on the cage of the visitor, pecking at it, trying to attack, and not bothering with any welcoming calls. When a feminine brown male was presented, the male again showed off his nest hole and called invitingly." (2004, p. 93)

Note that the research Roughgarden bases this description on argues that "the female-like males gain an advantage because they are in control of when to initiate a fight because of the opponent's poor sex recognition ability." (Sætre and Slagsvold 1995) The masculine male is therefore fooled into believing the feminine male is a peaceful girl. The Norwegian researchers see, as most of their colleagues, violence and deceit, where Roughgarden sees collaboration and the division of labor.

Roughgarden does not believe the male flycatcher is fooled by the feminine male. The problem with deceit theories, she says, is that not only must some animals be implausibly dumb, but others must be remarkably devious. The masculine flycatcher cannot be that stupid, because later in the year they tend to fend the feminine ones off.

Moreover, it is better for a masculine male to have a feminine "gynomorphic" male as a neighbor, than a much more aggressive masculine one.

Many biologists have done their best to ignore this strange phenomenon. But there are just too many of these cases. They require an explanation. The sexual selection theorists therefore argue that the large aggressive territory-holding male gender is "the reference male", i.e. the real thing. The other types are at best considered "alternative mating strategies" and often described as "sexual parasites". They are cheaters.

But where the traditionalists sees conflict and deceit, Roughgarden sees a practical division of labor. Roughgarden says:

"According to social selection, economic theory for the elemental one-male-one-female economic team is extended to larger teams with more 'social niches'." (2009. p. 243.)

In general feminine imagery seems to be adapted by males to reduce hostility and promote friendship (p. 99).

Roughgarden argues that the different genders represent different sectors within a kind of community economy. While some of the genders compete, others are like service providers working under contract. In return for a peaceful behavior and care for the young, they get the opportunity to mate. (p. 105)

Roughgarden argues that markings and colors on animals represents their "body English". This is how animals tell one another what their social role is, what their intentions are, and what activities they promise to perform:

"Feminine males are participating in a conversation on topics and with words used more frequently by females than by masculine males [and visa versa for the masculine females]." (2009, p. 244)

Now I guess you are all waiting for the punch line: trangender people are like the transgender animals. That is not given. It is definitely hard to argue that most male to female crossdreamers are feminine looking men! My main point with these posts is first and foremost to help us all think outside the box, and to demonstrate how deeply mainstream biology is anchored in traditional gender roles. Still, I will discuss the possibility of trans people being a separate gender in the final post in this series.

Up next: Gay animals!