Jack and Jackie: A dialog about sex and gender 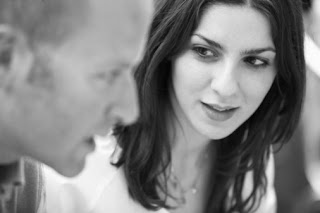 It was Ray Blanchard who came up with the idea of AGP men internalizing their external love object, in an attempt to explain why crossdressers and what I call crossdreamers get aroused by the idea of being women.

The logical progression towards Blanchard and Bailey's conclusion is something like this:

This means that if the autogynephiliac is to be true to himself (or herself in the case of AGP transwomen), he will have to keep quiet about his fantasies if he wants people to believe him when he says that he has some kind of innate femininity.

It is the man in me, I guess, who believes that if you intellectually understands something, you can handle it. So if I just managed to find an alternative explanation to why we are as we are, I would be able to get people to understand that this is so much more than a fetish.

The good thing about being an autogynephiliac is that we do have a strong inner woman, and she told me to stop fussing.

"You think too much," she said to me. "Take a deep breath. The answer is right in front of you!"

The rest of my admittedly fictitious inner dialog can be reconstructed as something like this:

JACKIE: Well, you have never really believed in that theory, have you? It is convoluted, inelegant, too much an attempt to make the facts fit with a theory where good old fashioned heterosexual love is the only kosher love that makes sense evolution wise. Blanchard cannot make you fit in with the homosexuals, so he have to put you in the paraphilia category.

JACK: Well, yeah. I guess he just took the idea of the fetish to the next step.

JACKIE: Exactly, but you and I know that there is more to autogynephilia than a fetish for clothes or a fetish for a female body, do we not?

JACK: Yes, it is just as much a deep instinctual urge to have sex as a woman. In the case of the crossdressers it is also a deepfelt need to express a strong feminine side.

JACKIE: Don't be shy, you can say it!

JACK: They want to express their inner woman.

JACKIE: That's a good boy! Don't worry, Jack, you are not schizophrenic. In this blogpost I am nothing but a literary device.

JACKIE: So why does Blanchard's idea about autogynephiliacs internalizing their external love object sound so convincing to many?

JACK: Because they find it creepy that someone can get turned on by the fantasy image of their own body. It is as if they are not able to have a relationship with a real woman.

JACKIE: But you have a relationship with a real woman, don't you, in spite of me?

JACKIE: And you love her very much! And you know of a lot of other crossdressers and crossdreamers that have real love relationships with women.

JACK: Yeah, but still. There are so many of us who become obsessed with our inner girls.

JACKIE: Fair enough, but there are a lot of self obsessed people around. If you had to keep a secret like that, you would be a little self obsessed as well, wouldn't you?

JACK: Tell me about it!

JACKIE: OK, so what is it that makes autogynephiliacs perverts?

JACK: Their sex life is unnatural!

JACK: They are autoerotic!

JACKIE: There you go again with all your fancy words!

JACK: They get off by fantasizing about sex! You know, all by themselves.

JACKIE: They get turned on by imagining themselves having sex? Alone?

JACKIE: And "normal" people never do?

JACKIE: So being autoerotic is OK?

JACK: Yes, but I sometimes imagine myself having sex with faceless men.

JACKIE: Yes, and what is wrong with that? You are not gay, Jack. I know who you are looking at when you walk down Main Street. You are not looking at the men. But your female instincts long for submission and penetration, and men have the necessary tool.

JACK: They are faceless! I have turned them into masturbatory props!

JACK: Now you are making fun of me!

JACK: Normal straight men do not dream about submitting to masked men!

JACKIE: What do you know about what normal men dream about? You are not exactly normal are you, Jack? You share your body with me, and in my mind your body is female. No wonder our instincts drive you to dream about being mounted instead of being the mountee. That's what girls do dream about!

JACKIE: No, you are a boring straight boy. But I am a girl, Jack, and I am part of you! And I know what I want.

JACK: You said you would not go all schizo on me!

JACK: But wait! Classical male to female transsexuals do not get turned on by the idea of having a woman's body, right? They are not fetishists. That proves that I am a creep and they are normal women.

JACKIE: I do put it that way! You should listen more to your female intuition, Jack.

JACK: According to Blanchard and Bailey I do not have a female intuition!

JACK: Oh, give me a break! You are just a figment of my imagination. This doesn't prove anything!

That's me, Jack. I am your target location error. So tell me, where do I come from?

JACK: I don't know. Some childhood trauma, maybe. God knows I had enough of them.

JACKIE: We all have childhood trauma, Jack. Why would your trauma lead to me?

JACK: I was very shy and timid as a boy. I guess I felt emasculated. And I worshiped women. Maybe I gave up on the idea of becoming a "real man", so dreaming of becoming what I admired the most was the only option. If I had been a woman, people would have liked me for my looks and not only for my bloody personality!

JACKIE: Yeah, yeah, yeah, and I am the only reason they like your personality at all. Hah!!!

Anyway, this emasculation of your explains why you feel alienated from your own body? Is that what you think? Why you avoid looking at yourself in the mirror. Why you unlike most men feel no pride in your manly bits?

JACK: Exactly! And although I am not a crossdresser myself, this also explains why so many of my fellow autogynephiliacs dress up in women's clothing.

JACKIE: They dress up as sexy women, dreaming of being sexually attractive?

JACK: It is as if you are reading my thoughts!

JACKIE: That's because I am reading your thoughts, Jack.

So!... Let me get this straight. Crossdressers dress up as women because they imagine themselves being attractive. But that is not the same as being in love with yourself, now, is it Jack? All people dream of being liked, and testosterone driven beings like you have a bad tendency of mixing up human attraction with sexual attraction.

Of course crossdressers dream about being sexually attractive! In this respect they are no different from other men or women. We all long to be loved.

By the way, for you to be in love with yourself would have been a huge improvement. As I see it, the main problem is that you do not love yourself. And you definitely do not love me. I make you feel ashamed.

JACKIE: But it is a good theory, Jack. This emasculation theory of your. It really is! And parts of it may even be true. The problem is that it doesn't explain why you started out as a timid boy in the first place. There is something in your genetic or biological profile that made you less like the archetypal rough and tumble boys.

JACKIE: Well, we do not know, now, do we? But I like to think of that "something" as me.

JACK: Of course you do!

JACK: Listen Jack, there are male to female transsexuals out there whose inner woman is so strong that they are women, no questions asked. When they say they feel trapped in their male bodies, they are correct. When they transition they become what they should have been, all along.

But nature is messy. In many cases it isn't that clearcut. All men and women, natural born or trans, have a mix of male and female traits along a large number of axis. In most cases the nobs and sliders are set in positions that make it easy for that individual to identify with one and only one gender.

In some cases, however, these traits cancel each other out, and the individual seems neither masculine or feminine. In other cases you can find one very masculine trait in parallel with strong feminine one. This makes the person appear both masculine and feminine at the same time.

Our language and our natural logic is able to accommodate for a lot of such variation, as long as the individual appears predominantly feminine or masculine on an aggregate level. But some are caught in the twilight zone, Jack, and in the twilight zone it is hard to decide what way the tree might fall.

JACK: Now you are mixing metaphors!

JACKIE: Yes, Jack, we are mixing metaphors, and that's why this is so hard to understand! There is a difference between men and women, but it is not absolute.

JACK: You have lost me now. I thought I was to be the analytical male and you the emotional woman, and here you go making another theoretical exposition. So you are saying being a man or a woman is about being placed somewhere on a scale. So that I am, let's say, 40 percent woman and 60 male?

No, there is not one slider with female at the top and male at the bottom. That is far too simple.

JACKIE: It is a complex system that doesn't care a fig about what some people believe is the proper order of nature.

JACK: Is all of this supposed to make me feel better?

JACKIE: I don't know. Does it?

Coming up next: Jackie gets some unexpected support from modern brain science!