On hormones, gender, mice and men 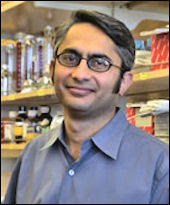 As soon as I posted my second article on Gilmartin's love shy men, up pops new research on the interaction between hormones and gender. This new research does not change the basic narrative of what I have written lately, but it does make it even more interesting and -- I must admit -- complicated.

The story so far is that both sexual orientation, gender identity and gender specific traits are at least partly grounded in biology: genes, hormones and male hormone (androgen) receptors. Variation in prenatal hormone production and the body's ability to react on these hormones (reception), may also lead to variation in the way we feel and act sex and gender wise later in life.

The Economist reports that Dr. Nirao Shah (pictured above) and his colleagues at the University of California, San Francisco, have discovered that both mice and -- presumably -- men seem to lack the expected androgen receptors needed to turn the early prenatal testosterone-surge into action. They could not find these neurons.

The Economist:
"It was reasonable to think, as many people did, that androgen receptors - which respond to male hormones - were mediating the manly transformation. But androgen receptors were found to be nearly non-existent in the brains of newborn animals. Dr Shah could not find them earlier in development either, such as just after the fetal testes first started putting out testosterone in a 13-day-old embryo. Without male hormone receptors to respond to testosterone, the researchers started to suspect androgen receptors were not the players they had been assumed to be. Nor, perhaps, was testosterone."
Still, it is clear that male-typical behaviours develop as the result of this early burst of testosterone. These researchers now believe that the testosterone is being converted into estrogen to carry out the newborn sexual-differentiation.

Androgen receptors are not the master regulators for male behaviours, but rather, the researchers say, a "gain control mechanism" which amplifies such behaviours—or, when the receptors are absent, reduces typical masculine behavior.
The last part of the previous paragraph is interesting in relation to crossdreaming (autogynephilia) and the development of love shy "male lesbians".
The researchers  genetically engineered male mice to lack androgen receptors in their nervous systems. These males still had androgen receptors in their muscles and elsewhere, so they had masculine bodies, and they experienced the testosterone surge and responded to normally circulating testosterone. But their brains were simply not able to detect it:

"The mice were compared with normal males in tests of masculinity. In one, a female was put into the cage. Interestingly, the genetically modified mice still showed the classic male-mating repertoire—mounting, penetration and ejaculation. But the researchers noted that they mounted less often, were less apt to penetrate and did not stick at it for as long as the normal mice. Another test turned up similar results. Typically, a strange male entering another male's cage is met with a fight. Again, the mutant mice behaved appropriately, but they were much less aggressive, spent less time fighting and they took longer breaks between attacks. The same was found for scent-marking. Like normal males, the mutant mice urinated in various spots around their cage (unlike females, who create a single latrine). But they deposited significantly fewer urine marks than the normal males."

Remember that the love shy often resent the pressure to behave aggressively and take part in the rough and tumble play of boys. They identify strongly with the stereotypical female way of behaving because of this. Their bodies appear  masculine, but their minds are something else.
Again: I am not saying that this explains how men become crossdreamers, i.e. that their dreams of being a woman and recurrent non-masculine behaviors and interests are caused by a reduced number of androgen receptors. Men are more complicated than mice. But it could definitely be one of many factors.
This is yet another example of how modern biology develops models that opens up for new and more flexible interpretations of gender issues. The fact that there is so much research going in this field right now gives me hope that we will get a better understanding of the different transgender conditions.
The Shah Laboratory
The paper: The Androgen Receptor Governs the Execution, but Not Programming, of Male Sexual and Territorial Behaviors. Scott A. Juntti, Jessica Tollkuhn, Melody V. Wu, Eleanor J. Fraser, Taylor Soderborg, Stella Tan, Shin-Ichiro Honda, Nobuhiro Harada, Nirao M. Shah. Neuron 2010; 66(2): 260-272.
Testosterone Amplifies Pre-programmed Male Behaviors (TS-Si)