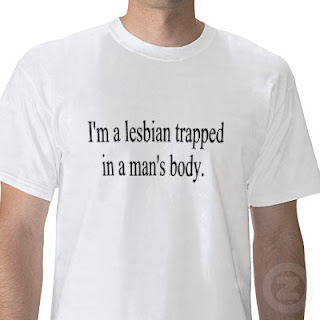 In this post I take a look at the factors that may be causing love-shyness and the birth of male lesbians.
In my post On Gilmartin's love-shy men and the male lesbians (Part 1) I presented Dr. Brian G. Gilmartin's book from 1987: Shyness & Love: Causes, Consequences, and Treatment.
Love-shy people are men and women who find it extremely hard to approach the other sex, in spite of the fact that they long for such a relationship more than anything else.
Many of the love-shy men included in Gilmartin's study describe themselves as male lesbians. A male lesbian is a heterosexual man who wishes that he had been born a woman, but who (even if he had been a woman) could only make love to another woman and never to a man.
Although Gilmartin does not cover crossdreaming or autogynephilia, and in spite of the fact that he is adamant about these men not being crossdressers, there are enough similarities to justify a more thorough discussion. I have had many comments and emails for men who identify as love-shy and male lesbians and who are also crossdreamers (autogynephiles) and/or crossdressers.
Note, however, that not all crossdreamers and crossdressers are love-shy men. Far from it. Many of them are outgoing and even promiscuous. But there seem to me there is some correlation between feminization, shyness and crossdreaming.

In this post I am going to look into Gilmartin's ideas about the origins of the love-shy men. The reason I decided to write a post about Genes, hormones, genes and gender identity before publishing this post, is that there are great similarities between Gilmartin's theory from 1987 and current ideas about hormones causing such variation.
In other words: If you have not read that post already, now may be a good time.
Nature and nurture
Gilmartin believes that love-shyness is a learned personality trait that is based on an inborn temperament. In other words: love-shyness is the result of an interaction between biological and psychological drivers.
The love shy is introvert by nature. This is a common trait among homo sapiens, and for most people being introvert does not cause too much trouble. In the case of the love-shy man, however, it stops him from establishing a relationship with a woman.
A love-shy man has also an inborn low anxiety threshold. He experiences anxiety much more frequently, and much more intensely and painfully than a person with a high or normal anxiety threshold.
Gilmartin again:
"(...) there are two inborn components: one is the high emotionality (low anxiety threshold); the second component is inhibition/introversion. When a person is very high on both emotionalityand introversion (...), the chances are exceedingly good within the context of American society that he will develop into a chronically love- shy individual."
Some of the psychological and social problems of the love-shy men could be considered autistic because of the men's trouble in regards to peers, social interactions, and adjustment to change. Years later when asked in an email, Gilmartin felt that 40% of severely love-shy men would have Asperger syndrome.
The causes of love-shyness
Gilmartin suggests there is correlation between and love-shyness and different conditions, including low maternal testosterone during fetal development, nasal polyps, and hypoglycemia. His point is that natal development may lead to the development of an avalanche of different symptoms, many of whom are found among a significant number of love-shys.
Of special interest for crossdreamers is his reflections on the role of pre-natal testosterone (ps 57):
"If the brain of a fetus is left alone, it will develop into a female brain regardless of whether or not it is exposed to feminizing hormones. Inessence, this is one of the myriad reasons why the male is a more delicate organism than the female. Many more things can go wrong in male fetal development than in female fetal development.
As I noted in the gene post this is a common view also today. The female blueprint is the default one. Nature turns you into a male by adding masculinizing and defeminizating hormones.
People like Roughgarden disagrees, and says that both male and female gonad development are caused by a mix of processes that turns female and/or male development on and off. This does not make much of a difference in this context, as the idea that hormones in the womb influences sexual development is the same.
Jogols pointed me to an post on the cause of homosexuality and transgenderism that explains this in more or less the same way as Gilmartin.
Gilmartin again:
"Unless the male fetus is exposed to masculinizing hormones plus the enzymes which permit each of these hormones to work on various sections of the brain, that male fetus will develop a brain that is in at least some ways feminine. The number of ways in which it will be feminine will be determined bythe number of sections of the developing brain that had been deprived of the appropriate masculinizing enzymes. Again, the enzymes permit the male hormones to do their masculinizing job."
So although Gilmartin uses a somewhat different terminology, his story fits well with current biology.
Gimartin continues:
"...There are different sections of the fetal brain that need to be masculinized. And each of these sections calls for the propitious operation of a different enzyme. Some sections of the brain have to do with sexual/romantic directionality. When these brain sections are inadequately masculinized, the person stands a good chance of becoming a pre-homosexual or a pre-bisexual little boy. "
Two influential contemporary researchers on gender and biology, Aliicia Garcia-Falgueras and Dick F. Swaab, argue that the fetal brain develops during the intrauterine period in the male direction through a direct action of testosterone on the developing nerve cells, or in the female direction through the absence of this hormone surge.
They say:
" In this way, our gender identity (the conviction of belonging to the male or female gender) and sexual orientation are programmed or organized into our brain structures when we are still in the womb. However, since sexual differentiation of the genitals takes place in the first two months of pregnancy and sexual differentiation of the brain starts in the second half of pregnancy, these two processes can be influenced independently, which may result in extreme cases in trans-sexuality.
"This also means that in the event of ambiguous sex at birth, the degree of masculinization of the genitals may not reflect the degree of masculinization of the brain. There is no indication that social environment after birth has an effect on gender identity or sexual orientation."