The female and male copulation instincts 1 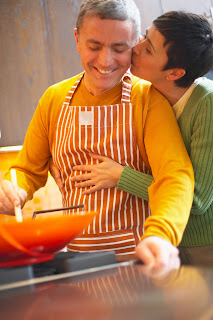 Remember that in this model the female brain is the default. Cismales ("normal" men) become cismales thorugh two processes: (1) Maculinization, i.e. the development of typical male behavior, but also the basis for later male sexual characteristics like body hair and larger muscular mass. (2) Defeminization: Processes that stop the development of female characteristics, being that a female psychology, and the basis for breasts or a curvy body. In this case Weinrich is focusing on the development of behavior, i.e. the brain, which must be understood as independent from the development of the body.
In his model the basic sexual masculine behavior is mounting, while the feminine is mount-receiving. The four quadrants represents the mix of masculine and feminine sexual behavior found in different types of individuals. Most females will be in the lower left-hand corner, most males in the upper right. People who fall in the corner opposite to the one normal for their biological sex are transsexuals. People who feel at home in the sex of their bodies, but who has a untraditional sexual orientation or gender presentation fill out the rest of the table.
Weinrich presented several models, but this is the one that seems to be the most finalized one. I found it in Linda Mealey: Sex Differences: Developmental and Evolutionary Strategies.

As you can see, the" heterosexual transvestites" -- who I think come closest to my crossdreamer category -- are put close to the upper right hand quadrant, side by side with the heterosexual men. This means that they are slightly less "mounting" in their sexual instincts compared to other heterosexual men, but not by much. They are not mount-receiving or feminine as regards their copulation instinct. Their brains are defeminized, and fairly masculinized.
Alternatively, some MTF crossdreamers may be what Wenrich calls gynephilic MTF transsexuals. They are closer to the side that is neither masculine or feminine as regards copulation instinct. They are more like the asexual transwomen.
And this is where Weinrich gets it wrong, in my opinion. From what I see from my own life, research and transgender fiction, many -- if not most -- crossdreamers are of the mount-receiving kind. This is the major obstacle they face in their heterosexual love lives. They love to be the bottom and not the top. Yes, there is -- as always -- variation, and some crossdreamers play well in both roles, but in general the M2F crossdreamers belong in the lower left hand side of the quadrant. This is where Weinrich has placed the androphilic male to female transsexuals.
Such a position will make the M2F crossdreamer brain as feminized as the one of androphilic M2F. Maybe they are and maybe they are not, or maybe the question is just silly. Regardless, the model breaks down.
In part 2 I will present an alternative model of the relationship between copulation instincts and gender identities.
Posted by Jack Molay