Guest post: A theory about the regular crossdresser's sexuality 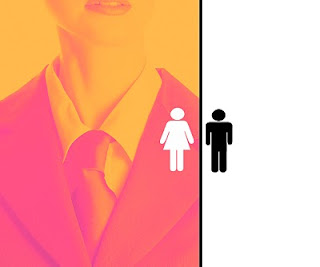 Here is a guest post written by Nadia-Maria Soraperra for the Knowing about CDing forum over at Flickr (an invite only forum).

Here are her reflections on crossdressing and sexual orientation:

You can read everywhere that "sexual orientation" and "crossdressing/being transgendered" are independent variables.

I will admit they are, because I'm not aware at the moment of any fact that would prove the contrary.

From the most reliable countings, gay people are a small minority among crossdressers, whereas bisexual ones are of a much greater number, almost challenging the number of straight CDers. It's a rather "new" finding because they believed in the past that straight CDers were almost (or at least) 80%, what we now know as strikingly overestimated.


What means : the proportion of 'bi' is much higher in the CD population than in the general population.This 'fact' would incline me to guess that Regular Crossdressing and sexual orientation are not so "independent" as once thought.

One issue we are facing to is the poor definition of being straight/bi /gay. Most polls do not warn about any precise definition, so that many people chose more or less arbitrarily.

Why is it difficult to have an accurate definition ?


For instance let's imagine a genuine boy, a married man, having had in his life 1000 intercourses with GGs [genetic girls], and only 3 with men. Would you rate him as either straight or bi ? If he added that he had preferred these 3 orgasms with men over those with women, would you rate him as gay?


Moreover we know that many men, lacking the opportunity of dating GGs (for instance when they are in jail), would not mind exhibiting gay behaviour, as an "ersatz" (better to have a relation to another man than no sexual relation at all). Would you rate them as bi or still as straight?


We know that some straight TG admirers (see for example old threads in the Flickr's group "Relationships - Dating a Transgendered Person") began to date TGirls because they were not enough successful at dating GGs. They tell us that they consider TGirls are women, so that they consider they are still straight.


Faced to such confusing opinions and experiences, I wonder what can be concluded at all, without the need to revisiting all the matter!


In a separate comment Nadia writes the following about crossdreamer sexuality:

What I find pretty fascinating is the puzzle of the crossdressers' sexuality.

In my opening post of this thread [over at Flickr]: How sexual orientation interacts with Regular Crossdressing? I wrote :

Moreover I already pointed out the flaws of the "autogynephilia" theory, as a general explanation especially to closet CD's sexuality, while that theory still appears to be a rather convincing one even to many in our community.

I find it surprising they can accept, with so few critical mind, the point of view of some established psychiatrists who still see crossdressing either as a definite mental disorder or certainly not as a healthy behaviour.

Whereas I firmly disagree with regular crossdressing being directly linked to any mental disorder (whether the GID or any sexual disorder), I can of course accept that some crossdressers (just as some people from the general population) may exhibit themselves one or several disorders. In addition of that, I think that autogynephilia may have a limited amount of insight in it, regarding some obvious cases, yet in a clear minority among RCDs [regular crossdressers].

After a lot of pondering about all these matters I may come up here with this theory of mine.
I believe that you can explain all the observed facts, provided that you simply admit that the sexual orientation of any transgendered person would have 2 different components:
Both components appear to be basically unrelated to each other.

Thus, you may combine a heterosexual sexual attraction with a homosexual one, or have 2 heterosexuals or even 2 homosexuals. Both are competing within, while only one is exhibited at a given instant.

You may either shift very quickly from one to the other - in a matter of seconds - or stick to the same for extended periods of time (almost all your life in some cases, often plagued with denial of being transgendered at all).

The first issue most of us have to face - especially these who do no more live in denial - is integrating both components of our sexual orientation in an acceptable view of only one self, the self-awareness of our whole personality/sexuality. And the biggest problem is then at finding one (or more) partner(s) able to give us the proper sexual satisfaction we deserve and need.

Anyway, as RCDs [regular crossdressers], we are prone to rationalizing our own behaviours, jumping to unprovable beliefs, and often quick at calling - or at 'not calling' - our sexual behaviour in many different ways, or at seeing it as something essentially specific to ourselves not having to match any (scientific) reality.

According to my theory, what's specific to each of us is the way we are rationalizing from the reality within, not this reality itself which relates to the fundamentals of any sexual attraction that are vastly beyond our own control.

According to my theory, that's very challenging to find a romantic mate who can satisfactorily meet all your sexual needs, when you may have for instance 2 different modes of heterosexual attraction, whether you are crossdressed or not, or whether you feel a man or a woman.

Some of the consequences of our strange condition are :
Autogynephilia is a spurious explanation for a puzzling behaviour that is as a rule adopted by someone who can't find the proper partner around, apt at exhibiting the proper sexual behaviours.

The 'autogynephilia' concept is mainly a mere optical illusion, a sweeping generalization and essentially a mistaken interpretation of a reality being in fact the product of a sophisticated sexual orientation, combined with an incomplete self-understanding of their own needs, and with the 'diktat' by an unaccepting society around us as well.