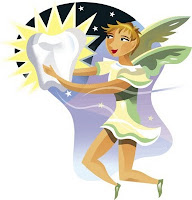 The myth says that crossdressers and crossdreamers (men who get aroused by the idea of being a woman) become what they are when puberty hits. The myth is wrong.

There are to many crossdreamer childhood stories around for this to be true.
Repressing your inner girl
Autogyn tells one harrowing child hood story over at "Living with Autogynephilia".
"I don't remember the exact year or how old I was, but I'm sure it was somewhere before the age of ten. I remember losing a tooth. I remember my mother telling me to write a note to the tooth fairy- to accompany my tooth."
In the not s/he wrote that s/he wanted to be a girl. That was a mistake.
"Shortly after, days, weeks, I'm not sure, I caught my father trying on my mothers one-piece swimsuit. Only, I didn't actually *catch* anything, that is until he raised his index finger to his lips to shush me.

"I stood there watching him, and then something even stranger happened. He ran out of his bedroom, and all over the house and in front of my mother. He kept yelling, 'Look at me, I'm (my name),' repeatedly. My mother was laughing hysterically."
If someone is in doubt why some crossdreamers manage to suppress their inner woman, this should be an example good enough.
Crossdreamers are liers
The fact is that there are a lot of people, researchers as well as transwomen, who deny that M2F crossdressers and crossdreamers experienced gender dysphoria or gender confusion when they are kids. The idea is that since crossdreamers are purely sexually motivated, their fantasies and dreams cannot appear before puberty.
This is one of the reasons Ray Blanchard argued that "autogynephilic" transwomen are lying. Their childhood stories are constructs helping them appear as regular "classic transwomen". The idea is that the earlier your gender dysphoria appears, the more "real" it apparently is.
It is well known that for a long time many doctors and therapist only accepted M2F transgendered who did not report sexual arousal from feminization fantasies as real women ready for hormone treatment and surgery. At the time researchers seemed to believed that only men were perverts, and that women were pure as snow.
I do not doubt for a minute that some crossdreamers wanting to transition told the doctors what the doctors wanted to hear. Why shouldn't they, when the doctors at hand were so hung up in 19th century stereotypes of what it means to be a man or a woman?
But that does not mean that their childhood memories were false. Given the stories told on this site, and all the crossdreamers I have been in contact with, I can say with 100 percent certainty that yes, many crossdreamers dreamed of being girls at a very early age.
The life stories of Anne Lawrence
I went over to Anne Lawrence’s site and reread her narratives about autogynephilia.