Watching the wildlife (on unnatural animals) 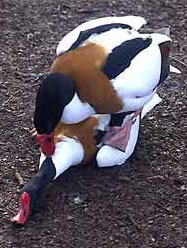 Ok, this is old news, but I would like to share it with you anyway, as the story says a lot about people's reluctance to abandoned cherished prejudices.

In 2006 the Natural History Museum in Oslo arranged an exhibition called Against Nature. The idea was to document same-sex relationships between animals.

The project leader for the exhibition, Geir E. Søli, hoped that it would weaken prejudices against human homosexuals.

"It turns out that as many as 20 percent of the black-headed gull [Larus ridibundus] pairs are of the same sex. Same sex relationships have been documented among 1500 species in modern times. The percentage of 'gay' animals varies from five to forty percent. The record is held by a species of parrot."

He pointed out that 100 percent of our nearest relative, the bonobo, is bisexual. Among the orcas scientists have found life long sexual relationships between males.

I have argued that information on "gay" animals is important for transgender people, partly because it tells us that the word "unnatural" is meaningless. If animals display same-sex behavior,  same-sex relationships between humans cannot be "unnatural".

Secondly: What we are seeing here is not necessarily homosexuality in the modern Western sense, but various types of gender-crossing behavior. Being transgender is not "unnatural". Male birds who behave like female birds are not "autogynephiliacs".

And if this is the case among other mammals, we should be very careful before we reduce all human transgender conditions to sexual perversions or merely a cultural phenomena.

The reaction to the exhibit demonstrated clearly that many use the word "unnatural" to brand people as perverts. It has nothing to do with nature per se.

Jan-Aage Torp, pastor in a local Pentecostal church, was for instance shocked when told about the exhibition, arguing that there must be better ways of using the tax payers' money.

"These are two separate sexes, meant by nature to produce kids," he argued, Tea Party wise, doubting that these researchers could be right.

At his blog he argued that the exhibition  photos showed "animals in natural play" (ref. photo of playing males above).

"But if this was true, that does not mean that it is good," he continued. "This might be a perversion or sickness we should help the animals cure."

I still have this image in my head of him running around in the Norwegian forests with a looking glass, checking the sex of blue tits, and stopping them from unnatural fornication.

Here is more info on the exhibition.