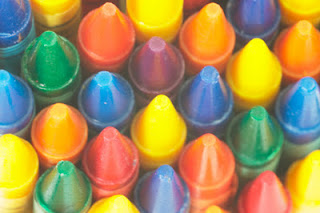 "You calculate it by subtracting the mean score of females on a given test from the mean score of males and then dividing the result by the standard deviation of both groups (which is basically a measure of the overall spread of abilities, or the width of the curve)."

The d values are positive for traits or skills where males outscore females and the other way around.  By convention, differences are considered small when the d value is around plus or minus 0.2. Medium is 0.5. 0.8 and higher is considered a large value.

It turns out the differences are quite small compared to the range of performance within each sex. Eliot makes a comparison with a truly significant difference: the difference between men and women as regards height (2.6). In the accompanying figure, Eliot adds a couple of curves showing a difference of 0.35:


"The d value of 0.35 in this graph is close to what's seen measurements of sex differences on standardized science-test scores or (if the male-female curves where swapped) in evaluations of verbal fluency (that is, the speed and accuracy of speech). The curves obviously overlap through most (76 percent) of their range, and the difference between average males and average female is small compared to the ability range within each sex."

As Eliot points out, this means that a large number of women are better at men at science, math and asserting their opinions, while loads of men outperform the average woman at speaking, reading and interpreting the feelings of others. This means you can never use this research to make predictions about individuals.

Eliot refers to Jane Hyde, a psychologist at the University of Wisconsin, who points out that out of 124 extensively analyzed gender specific  psychological traits, 96 were in the small difference range (d less than 0.35).

"Or as others have succinctly put it," she says, "'Men are from North Dakota, women are from South Dakota'."

And please note that many of these studies are based on questionnaires. As Anne Fausto-Sterling has documented (Myths Of Gender: Biological Theories About Women And Men ) , men and women have a tendency of giving responses in accordance with the stereotypes, mostly out of a need to belong and to appear normal.

The extremes of extremes

Elliot also points out that sex differences between the man male and female are nowhere near as great as those between the extremes, but it's only the extremes that make headlines.

And it is the focusing on extremes that leads to gender stereotyping. As Eliot points out, beliefs about male-female differences have actually become more exaggerated over the past several decades.

Why is this relevant for the transgender debate?

There are several reasons:

1. The stereotypes are used to persecute transgender men and women, both by cisgender and other transgender people.

I grow cold when I hear trans women disparage other male to female transgender people by arguing that they are violent male chauvinist pigs who cannot understand women, or who dismisses the sex identity of another trans woman because she argues too strongly or "manly".

I find this especially offensive when the women who make these accusation show a kind of aggression that according to the stereotypes is a male trait. It isn't, of course, but the irony is tragic.

2. The stereotypes mess up our attempts at understanding our own sex identity.

I have seen male to female transgender who hold on to their shyness, introversion, passivity as proofs of their femininity. They may perfectly well be women, but an introvert personality profile is as likely to be male as female.

I have also heard male to female transgender, who – in spite of severe gender dysphoria – argue that they cannot possible be women, as they are too interested in – I don't know – science fiction, engineering or (God forbid!) sex. I guess they believe all women are asexual barbie dolls, which is – of course – sheer nonsense.

If women assigned female at birth do not have to adhere to the stereotypes to be considered women, trans women do not either. Sex identity cannot be determined on the basis of a psychological personality profile.

3. We miss the fact that a male to female transgender interest in feminine attire, behavior or stereotypical sexuality can be a symptom instead of a cause.

That is: The reason some crossdressers want to dress up in a pink dress, is not that dressing up is pink is genetically programmed into women, but that the crossdresser has an inner woman than is looking for a way to express herself, and she makes use of the cultural symbols at hand.

By dressing up in culturally extreme symbols, the inner femininity is affirmed.

One possible explanation of this is found in the research of Suzanne Kessler and Wendy McKenna (Gender: An Ethnomethodological Approach).

"What Kessler and McKenna found was that once gender had been assigned, almost anything that person did would be seen as consistent with that gender attribution. Irregular details (e.g. a male sounding voice) would be understood with reference to the original attribution and used to substantiate it (e.g. 'It is a husky-voiced female'...) When faced with contradictory evidence, the members would do anything to make sense of it, except, that is, to acknowledge that the person might be ambiguously gendered."

I experience this all the time, as I clearly have a voice that sounds like a woman's. This is no problem as long as the one I am talking to can see my male appearance, but on the phone they have no visual clues to balance the input from my voice.

I once had a Japanese colleague who was on the verge of committing hara kiri when he realized he was talking to me, and not the woman he believed to be my secretary. He had taken me for a woman, which in his mind must be the most offensive insult ever!

Transsexual friends tell me of a tipping point. After having taken hormones for a while there suddenly comes a day when people stops treating them as men, and starts responding to them as women. It is as if all the subliminal cues have reached some kind of critical mass. As soon as that has happened, a geeky interest in Star Wars and ComicCon is considered a quaint and charming feminine trait, and not a proof of her being a nerdy boy.

All of this means that to the extent there are typical male and female personality traits and behaviors, they are in our minds and not in the real world.  It is time for us to free ourselves from these restraints.
Posted by Jack Molay