In Crime and Punishment Raskilnikov (which means the divided one) is reconciled with his "feminine side" with the help of the love of Sonia.

In Notes from the Underground , the anima nature of this counterpoint is  even clearer. The repressed nature of the anima is exemplified by the fact that the woman is a prostitute, which --according to the predominant cultural values of the time -- made her filthy. In that book,  there is no reconciliation, as the main character renounces the love of Liza. By paying her for her company, her reduces her to a whore and a whore only.

The reason I call these women anima figures, is that they represent the opposite of the conscious masculine facade these main male characters present to the world.

Goethe actually ended his Faust II with the words "Das Ewig-Weibliche zieht uns hinan" ("The Eternal Feminine draws us onward/upward"), referring, I believe, to the divine road of heart and intuition, as opposed to the sterile ways of the hyper-intellectual mind.

The dynamics between the cold and analytical man and the warm and emotional woman was also found in the popular literature of the day (and still dominates parts  of romantic "chick litt.") Dostoyevskiy was clearly influenced both by popular art as well as  the Christian image of the merciful and compassionate Virgin Mary.

This does not mean that you did not find other female types in the art of the time, like -- let's say -- the femme fatale, but the loving comforter was dominating.

In the late 20th century and the early 21st century the character of the female role model started to change. The roaring twenties saw the birth of the independent "flapper", slim, boyish and boisterous.

In the second half of the 20th century he sexy ladies of the James Bond movies were slowly changing from mindless bimbos to independent, intelligent and ruthless murderers, at the same time as James Bond became increasingly more emotional and moody.

The most amazing transformation of them all was created by Joss Whedon, who turned the airhead cheerleader into the archetypal male dragon hunter.

Buffy, the vampire slayer, remains a sexy blonde, but she has now acquired all the characteristic of the archetypal male hero.

For good measure, Whedon also transformed the shy computer geek, Willow -- who incorporates the values of  demure  femininity -- into an evil, powerful, witch, who threatened to bring on the end of the world.

Since then TV has presented a large number of strong and atypical female characters: Veronica Mars, Temperance Brennan of Bones (who is a hyper-analytical anthropologist with Asperger), Claire Danes of Homeland (extremely intelligent and bipolar!), and Audrey Parker of Haven. And then, of course, there is Nancy Botwin of Weeds, suburban house wife made violent drug dealer.

What is truly interesting is that many of these women are not only taking over the aggressive and dominant role of men, they are taking over the typical masculine emotional dysfunctions as well.

We have not seen a similar role reversal for the male role models  -- yet. Buffy's lovers remained masculine and powerful men.

Still, it  is interesting to see that both of her vampire boy friends, Angel and Spike, have to get their soul back in order to become human. The Latin word for soul is -- of course -- anima, and it is this traditional feminine side that makes it possible for them to feel remorse and love.

Lately we have gotten TV series where the male protagonist clearly reflects personality traits that has traditionally been considered feminine.

In Alcatraz the very feminine looking female lead, Rebecca, plays the traditional male warrior role. She does not hesitate to fight or kill.

Her side kick, Doc Soto, on the other hand, is an empathic and emotional comic book geek who finds the look of blood nauseating.

Admittedly, he is an intellectual, but not in the dominant way of the traditional university professor.

What this trend shift tells me, is that the female and male characters found in art and entertainment, are changing. Given that these characters are both influenced by -- and do influence in their own right -- what is considered acceptable and admirable masculine and feminine behavior, there will be a parallel shift in the anima and the animus of men and women.

The anima and the animus compensate for the suppressed side of the persona and the ego. This means that these archetypes cannot be understood as stable sets of feminine and masculine personality traits. They will have to change as the cultural setting develops.

You could say that Doc is Rebecca's animus. Rebecca is Doc's anima. They both represent the underdeveloped side of the other's psyche, and in this case the traditional gender roles have been switched.

A somewhat similar dynamic is found between Kate Beckett (the dominant cop) and Rick Castle (the more submissive crime author) in the TV series Castle.

Alcatraz has now been cancelled. Maybe the Americans were not ready for a male lead with a "feminine" personality.

In other words: There remains a clear unbalance in the struggle for gender equality, as the male role remains the ideal. Women who become strong and dominant are admired, while men who adopt more stereotypical feminine personality traits are ridiculed.

This is probably why male to female transgender are more likely to be made fun of than the female to male ones. Indeed, female to male crossdressers are close to invisible, as it is OK for women to dress like men.

I believe this imbalance is also part of the reason male bodied transgendered people are more easily targeted as perverts and paraphiliacs, while the female bodied crossdreamers are not even on the radar of scientists and moralists. 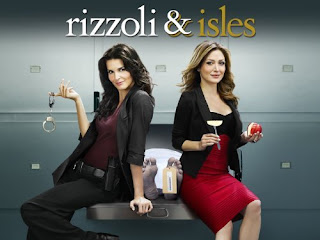 One episode of the American TV series Rizzoli and Isles makes this imbalance perfectly clear.

Jane Rizzoli is the dominant cop and Maura Isle her intelligent medical examiner (another Aperger!). They are both very strong women, while at the same time being sexually attractive.

In the episode called "I Kissed a Girl" Rizzoli  meets a submissive guy who would like nothing more than stay at home with the kids. It is made abundantly clear that the two women not only find him a weird puzzle; they find him unattractive as well.

You can see a clip here.

Suppressing your other side

This means that male bodied transgender persons who have typical "feminine" personality profiles are  more likely to develop mental illnesses their female bodied counterparts. This reinforces the idea that men are more likely to be mentally ill, perverted or paraphilic than women. It is a vicious circle, indeed.

You might say that the Rizzoli case tells us of another potential problem:  If we take the liberty of interpreting this episode from a Jungian perspective, Rizzoli is rejecting her own animus as unacceptable. Her hidden "male" side has now become submissive, emotional and domesticated, which is something a strong woman like her cannot admit to.

Still, I doubt that women like her will develop new psychological disorders, caused by them not being allowed to express their "feminine" side.

Women like Rizzoli and Isles are still allowed to cry in each other's arms while sharing buckets of chocolate ice cream. That helps to keep you mentally balanced.

Please note that I am talking about personality types and  gender roles in this blogpost. I am not talking about what I call sex identity or sexual identity-- which is often refered to as "gender identity" -- i.e. the individual's conviction or feeling of being a man or a woman.

Doc and Rebecca still identify as man and woman, in spite of them expressing a temperament that has historically been assigned to the other sex.  I will come back to this in the next blog post.

To be continued...
Posted by Jack Molay