In Memory of Those We Lost 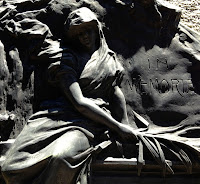 Suicide is the greatest threat crossdreamers face. What can we do about it?

Last summer there appeared a heart breaking post on one of the male to female transgender/crossdreamer caption blogs: Yvonne's Caption World.

"My name is Mark. I am Yvonne's brother.

She left a note saying that she felt she could no longer go on living (in her words); 'in between two genders, dysfunctional in one and unable to become the other.'

She did not feel she had anyone to turn to. I wish she had given me a call."

Her site is full of captions and stories reflecting the dreams of a gender dysphoric crossdreamer. And yes, it seems obvious to me that Yvonne was a transsexual woman. In the upper right corner of her blog you will find a request for support for her transition.

Suicide among crossdreamers and transgender

We have actually no idea of how many crossdreamers take their life every year. The reason for this is that most crossdreamers are invisible, not only to health personnel  but often also to their loved ones. Often those left behind do not know what really caused their family member to chose this option.

We do have statistics for registered transgender, however, and I have reason to believe that great many of those registered as such are crossdreamers (transgender is here an umbrella term including a wide variety of gender variant people).


According to one recent American study 41 percent of American transgender have attempted to commit suicide.  A study from Ontario shows a similar number (43 percent), as does an Irish study.

A Californian study reports that as many as two out of three transgender people have considered taking their lives.  The comparable numbers for the general population varies from 6 to 12 percent.

Cristan Williams have written an interesting post on the extreme pressures faced by trans people. She points to a study which shows that 55 percent of US trans people live with social anxiety (compared to 6.8 percent in the general population).

All of these studies cover respondents that have been in touch with social services, health services or personnel engaged in transgender care. However, data from the transgender support site Laura's Playground  tells us that this is a problem that goes beyond the ones that actively seek help from health professionals. Laura's Playground handled some  staggering 80,000 suicidal crises online in a five year period!

It is a fair guess that as crossdreamers go, most of the ones considering taking their life are gender dysphoric, i.e. they feel a strong dissonance between their inner selves and their bodies.

Still, I know for a fact that many who do not identify with the opposite sex also struggle with identity issues, shame and confusion. This is not a transsexual problem alone.

There are many reasons for why transgender persons give up, including violence and harassment, stereotyping and discrimination .

The Ontario report concludes that respondents aren't suicidal because they're transgender; rather, it's the social shame and isolation that get to them.

The numbers form Laura's Playground ranks the following causes as the most important:
I have had quite a few crossdreamers contacting me and telling me about their despair. Their stories, as well as my own experience, tells me that there are various factors that may lead people into that dark place:

Alienation from your own self
Children try hard to adapt to the expectations of parents, peers and play mates. Society normally enforces gender expectations with  fierce force, and many transgender children go to extremes to keep the love and respect of those around them. They are caught in this pattern as adults. The discrepancy between the role they are forced to play and their inner sense of self becomes jarring.

Many succeeds so well in suppressing their inner self that they make themselves believe they are not transgender. The emotional pain remains, though, and becomes even harder to handle.

Alienation from your own body
Crossdreamers suffering from gender dysphoria (or more correctly: sex dysphoria) also experience a strong misalignment between their mind and their body. It is as if their body isn't truly theirs.

Ironically, this means that any social or sexual affirmation they get as their birth sex will not strengthen their sense of self (as it will in a non-transgender person). Instead it will make the pain even more acute.

Alienation from friends, family and society at large
Many (if not most) crossdreamers keep their crossdreams to themselves, or limit their exposure to anonymous communities online. This means that they do not tell their friends and family about the one part of them that matters most. This leads to loneliness and often  a feeling of duplicity. This further undermines the self esteem of the crossdreamer.

Those that do come out of the closet and reveal their true nature, risk ridicule and -- in the worst case scenario -- losing their loved ones. Many are violently attacked, verbally and physically. This even happens online, where religious fanatics, radical feminists, militant "classical transsexuals" as well as bigoted "experts" attack them for being perverts and "paraphiliacs", all of them negating the crossdreamer's and the transgender person's  sense of self.

Existential angst
For some, and especially older crossdreamers who have not transtioned, crossdreaming may also lead to what we can call existential angst. This is basically situation where they fear they have lost out on life, having never become what they now believe they were supposed to be.  Some find that they are truly transsexual, but fear it is too late to do something about it, age and social relationships considering.

For some this becomes all too much, and they give up.

What can we do?

Mark, Yvonne's brother, gives good advice on how to handle the darkness:

"I am sure many of her readers are going through the same mental struggles Yvonne was. If you are, please ask for help don't follow Yvonne. Those who love you will listen and help. Those who don't are not worth losing sleep over."


It is better to try to talk to your loved ones and fail, than to kill yourself without giving them a chance.

I will add that if you do not believe this is possible, do seek professional help from someone with a heart and an open mind! Your outlook changes when you are able to put your feelings into words, and there is someone there who can listen with compassion.

Talk about this in the public room

The reports  I get from crossdreamers is that their online communities save lives. This applies to transgender forums like Laura's, dedicated crossdreamer forums like Crossdream Life and sites for creative crossdreaming like Rachel's Haven [explicit content]. For the most part these are arenas where they can be themselves and get acceptance and understanding.

She talked about her suicide plans at the gala fundraising dinner for LGBT advocacy group Human Rights Campaign in San Francisco last year.

"Wachowski, now 47, revealed how she was beat by a nun in Catholic school, wore a slip under her clothes and became involved with theater in high school because she fell in love with the costume collection.

"As she grew older she felt an 'intense anxious isolation' that included insomnia and depression. At one point, she went to a local Burger King and penned a four-page suicide note to her parents. She planned on jumping in front of train, stood on the platform and waited, until an older man passed her and stared at her. 'I don’t know why he wouldn’t look away. All I know is that because he didn’t, I am still here.'" (Video here)

One of the main reasons for suicide among gender dysphoric MTF crossdreamers is lack of understanding and lack of affirmation. On one level they do understand that this is so much more than a "sexual thing". If that had been all there was to it, the condition might have been difficult, but  not a challenge of these proportions.

Still, given that most -- if not all -- have been brought up i strict heterosexist culture where men are men and women are weaklings, the feeling of being a woman brings up all kinds of fears. There is much internalized homophobia among male to female crossdreamers, and the fantasy of being a woman having sex with a man triggers those fears.

Many MTF crossdreamers literally join the marines in an effort to quench their feminine side.

In other words: It takes a lot of courage and a lot of time to face the insight that sex and gender is not so clear cut as the popes and mullahs of this world want us to believe.

Hearing so-called "experts" -- and even transsexual women -- reducing them to perverts is of little help to those living in the twilight zone of gender identity or those who are truly transsexual.

I suspect quite a few have been pushed over the edge bey being called an "autogynephiliac". I am not going to repeat my arguments against the factual content of that theory here. I will only stress that for  transsexual women the term is emotional poison. It may, literally, kill.

The recent use of the autogynephilia theory by radical feminists is depressing, and shows how extremely damaging this theory can be.

But I also see reasons for hope. 2012 represented a breakthrough for gay rights in the USA, where many states finally followed in the footsteps of countries like my own and opened up for gay marriage.

I have also noted that younger transsexual women refuse to make use of the autogynephilia theory or take part in the hate crimes of the so-called "classic transsexuals"/Harry Benjamin Syndrome tribe. This leaves room for crossdreamers in the transgender community. In time we may get where the gay community stands today.

This is why I urge those of you who despair to stay with us. Share your feelings here or in other forums that welcome people like us. You are not perverts! And you are not alone!

I am taking the liberty of closing this blog post with one of Yvonne's final captions. I believe it speaks for many crossdreamers.

The Trevor Project (US)

If you know of other institutions that should be listed, add them in a comment.
Posted by Jack Molay