I didn't either, before I saw the movie The Kids are All Right with Julianne Moore and Anette Benning as a lesbian couple with kids.

In one scene we can see the two of them watch a movie with men having sex with men in order to get into the mood.

By accident, their son finds the movie later on, and in wonderfully akward scene we see how the two parents try to explain what this is all about.

In the name of fair use I have taken the liberty of embedding the relevant scenes here. (This is not office material.)

And yes, this has a lot to do with crossdreaming. Read on!

Here is the thing: The scene represents an anomaly.

The reason for this is that sexual orientation is supposed to be triggered by sex specific visual stimuli: big breasts, broad hips and a general feminine appearance for those loving women, and broad shoulders, tight asses and a masculine look for those attracted to men.

Yeah, I know that this is not always the case in real life, but some scientists are really not that interested in real life.

Anyway, gay women are therefore not supposed to be aroused by the sight of men having sex.

And yes, I have checked. This is not something the movie makers have made up. A simple Google search reveals that this is a common phenomenon.

So what is going on here?

In the movie one of the mothers, Jules, try to explain this to their son, Laser:

"Well, sweetie, human sexuality is  complicated. And sometimes, people’s desires can be...counter-intuitive... For instance, since women’s sexual  responsiveness is mostly internal,  sometimes it’s exciting for us to  see sexual responsiveness more, you know......externalized... Like with a penis." 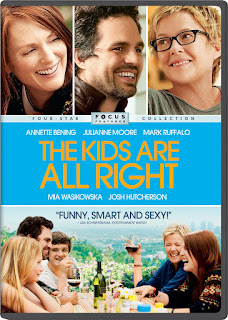 For them an erect penis is exciting, because the man's arousal is so obvious and visible. Or so Jules says. The fact that Jules is explaining this in a very embarrassing context may lead her to hold back some information.

The explanations given by lesbians online are very diverse, which tells me that many of them have no clear idea of why they find such movies exciting. Still, I am beginning to see a pattern.


Gwennie B over at Yahoo! Answers have listed some reasons given by lesbians:

This does not explain the paradox, though. Lesbians are still not supposed to get turned on by the male physique.

This makes more sense to me. Even if lesbian women are oriented towards the female body, they may express the sexual need to be receptive or penetrative. In other words: These basic sexual instincts are independent of their sexual orientation.

Again this is an argument that makes no sense according to the traditional science narrative. But if you accept that lesbian women can be turned on by the sight of an erect penis without buying the whole male package, this is starting to make sense to me.

This does not explain the fascination of the male body, though.

I will take her word for it.

The relevance for male to female crossdreamers and lesbian trans women

You do find a parallel among male to female gynephilic (woman-loving) crossdreamers and lesbian transsexual women. Many of them report fantasies where they are having sex with a man. Many of them also display a fascination for the penis.

This phenomenon has become an important part of the very controversial "autogynephilia" theory.

In other words: They are not attracted to the male body per se, but get aroused by the idea of being a woman. The male character in the imaginary bed serves only as a prop that reaffirms the femininity of the crossdreamer.

I have always found this argument strange, because it is depending on one important premise: That you cannot be fascinated by the penis or taking the traditional role of the woman in bed, unless you are a straight woman or an effeminate gay man.

The argument also requires that "visual attraction" is the only legitimate reason for having sex. In real life people have sex for a wide variety of reasons: For comfort, for the fascination with someone's personality or intellect, to achieve power or safety, to help someone and so on. All of these situations can lead to arousal.

For some reason being married to a woman does not count as sexual bonding for "autogynephiliacs", they are still locked into their narcissistic self-desire, according to researchers like Ray Blanchard, J. Michael Bailey and Anne Lawrence.

But what if the male to female crossdreamer has a receptive, "feminine", copulation instinct, and desire penetration in the same way a straight woman or a lesbian "femmes" want to be receptive?  Wouldn't this lead to fantasies where they were taken by men, women with strap-ons, pre-op transwomen or "futanari"?


Indeed it would. And these are exactly the kind of fantasies you will find among some (but not all) crossdreamers.

And it is this "womanly" desire to be receptive people find so offensive, because men are not allowed to take on the female role in our culture.

This is also an old taboo: In ancient Greece and Rome,  men would gladly have sex with men, but they would never admit to "taking the role of the woman".

The "autogynephilia" theory takes this taboo to its extreme.

The theory denies that male to female crossdreamers can have a receptive copulation instinct. They are attracted to women, right? And heterosexual men cannot have typical feminine desires per definition. Ergo: Their desire is a misdirected masculine urge to copulate with a woman, in this case themselves.

It is fascinating to see how the cultural stereotypes forces male researchers like Blanchard to select the most complicated explanation for a phenomenon in order to save the ruling paradigm of the day.

For Blanchard sexual orientation = copulation instinct = sex identity. In the real world these may be independent variables.

No one cares about what women do, however. A lesbian's fascination for the penis only confirms the dogma that women love the male sex organ.

Women who play the role of men may be considered strange, but this is not much of a taboo. After all, who can blame them for wanting to be a strong and powerful man? Being a man is good. Being a woman is... less so.

In other words: the pathologization of male to female crossdreamers is the result of a sexist culture that finds women inferior to men.

This being said, there are important differences between the MTF crossdreamer's desire to be receptive and the birth assigned female lesbian's fascination for the penis.

Their life trajectories are very different, and this also shapes their experience of life and their sexual fantasies.

I discussed this phenomenon with my Thai sexologist friend, Natalie, (the one who helped me develop the slider model of sex and gender) .

She points to an important difference between female born lesbians and MTF crossdreamers and lesbian trans women: They will normally find it easier to be confirmed as women by other lesbian women. The MTF gynephilic crossdreamer are most often confirmed as men by the women who loves them, which means that their inner woman gets nothing in way of affirmation.

This, I believe, has to do with the idea of being validated as a woman by a man rather than anything else.

"It must be noted that it is with this same idea that many men like to have sex with women, even if they are not really gynephilic. One of the remarkable aspects of our contemporary sexual psychology theories is that they often miss the idea that people like having sex not necessarily with people they may find attractive but with people who validate them!

"If for example, I remove the connection between masculinity and heterosexuality, and make it socially feminine, many otherwise straight men may lose interest in women strongly and exclusively. It is all about the validation factor.

"Just like many men may live in heterosexual relationships solely due to the validation of their being masculine, received from women (rather than other men, with whom an intimate contact may make them feel feminine or queer), many MTF  transsexuals may find that they are better affirmed as women by men rather than other women.Things may totally change if the artificial connection between gender and sexuality is removed.

I think she is spot on in her analysis of our need for confirmation. The only difference between her and mine interpretation is that I put a little more emphasis on the fact that many (but probably not all) MTF crossdreamers have a dominant receptive copulation instinct.

Related blog posts
The female and male copulation instincts
The cause of crossdreaming, an alternative model