The Gay Male Friends of Girlfags

In spite of what the girlfag-bashers on tumblr say, gay men are not the enemies of girlfags and female to male crossdreamers.

Tumblr is one of the favorite social tools of the new generation, including male to female crossdreamers and girlfags.

Some of you will have noticed that I have put up a tumblr blog in order to get in touch with them. My wife, Sally, is also blogging on transgender issues over there.

(By girlfags I mean female bodied persons who are attracted to gay and bisexual men. A majority of them can be understood as female to male crossdreamers, as they express some kind of masculine sexuality and/or identity.)

The young and restless

One strength of tumblr is that the audience is young. 66% of all visitors are under the age of 35, while 39% are under 25 years old. If you want to know about their interests and problems, this is the place to go.

On the other hand, the young age of the majority of users is also a problem, as some of them have still not developed the social antennas needed to sense the suffering of others. Some are also too angry and frustrated to treat people with love and respect. Tumblr is like a school yard where the bullies roam unsupervised.

I have rarely seen so much aggression and hate. The girlfags are targeted by some bloggers. Some of them are separatist "truscum" FTM transsexuals, who clearly see the female bodied crossdreamers as a threat to their own social acceptance.

The standard argument is that girlfags are "sexual fetishists", who are objectifying and preying on gay men. And yes, the autogynephilia theory has been used, as well.

Because I defend these fellow crossdreamers, many of them believe I am a young girlfag. This has made me the target of much aggressive misogyny. The levels of irony in this scenario are mind-boggling.

But here's the thing: I find no such hostility towards girlfags among gay men in general.

My girlfag friends report the same. Their gay male friends are just that: friends. They accept them in the same way they accept the "fag hags". The whole "fetish" argument makes little sense to them, probably because gay male culture has a lot of "fetishistic" expressions of the gay identity.

I am going to share a quote with you which illustrates this. It was written by a gay man in a girlfag Facebook group. I have his permission to republish it.


A gay man on girlfags

“I don't think that there is a fetishization of gay men in operation here. Aa a gay man I have very little knowledge of or insight into female sexuality but my communications and exchanges with girlfags convinces me that women have an innate and empathetic capacity to be truly sexually fluid, not only as to sexual orientation, but even as to gender roles.

"I have been lucky to become friends with  some girlfags. The dynamic is always very much male/male in nature. I believe that girlfags are able to inhabit in their minds the gay male space and that they are reacting to gay men as gay men do.

"I can also appreciate that many girlfags would like to be seen as gay men. I see no reason why girlfags should not butch it up if they want to absorb some of our characteristics. But be prepared for a close visual inspection of the basket!”


As this quote shows, gay men can also recognize the masculine side of the girlfag soul.

It has been said that being a girlfag is about wanting to be seen as male in the eyes of a male lover. Many of them achieve this goal with straight and bisexual lovers.

But I also know about love relationships between gay men and girlfags. This does not make these men bisexual. They simply respond to the male side of the girlfag's pscyhe. 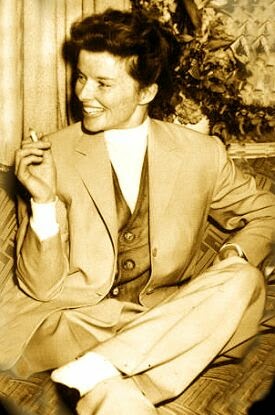 Some girlfags are become trans men, showing that this is much more than a fetish.

Girlfags represent just one of many expressions of gender variance. Their sexual orientation and gender identity can no more be reduced to a sexual fetish than the identity of other LGBTQA groups.

At one time or another the fetish argument has been used against all members of the LGBTQA family, including gay, lesbian, bisexual, transgender, transsexual and genderqueer. The goal has always been to invalidate their identities and force them back into their closets.

Gay men have been pictured as hypersexual, fetishistic predators by the medical establishment and the religious right. Lesbians were pictured as mannish fetishists who seduced straight women, turning them into feminists. Recently the so-called trans-exclusionary radical feminists have been using the exact same arguments in order to stigmatize trans women.

The current attacks against girlfags are based on a lack of knowledge, fear, tribalism and old fashioned sexist prejudices. We have to stop putting sex, sexuality and gender identity into these small, suffocating boxes!

Here are some fascinating glimpses into the tumblr girlfag debate:

Janet Hardy: What you need to know about girlfags
On why the girlfag term is supposed to be offensive
On why girlfags invalidate biseuxal men (really!)
So far there have been 98 notes and likes on this post on girlfags
Janet Hardy has tested the prejudices of tumblr girlfag-bashers
On girlfags, gay men and fetishes
A girlfag speaks out on what it means to be genderqueer
Do you know what a girlfag is, really?

Sidebar: Katharine Hepburn as a Girlfag

I have used images of Katharine Hepburn to illustrate this blog post on girlfags. Needless to say, she did not call herself a girlfag, as the word had not been invented yet. Still, she definitely was one.

Here is a quote from Advocate:

“I would consider ‘transgender’ a better way to understand Katharine Hepburn than anything else,” says out novelist and Hollywood historian William J. Mann. His latest biography, Kate: The Woman Who Was Hepburn (Henry Holt and Co., $30), explores with unprecedented frankness the star’s fluid sexuality and gender identification.

"Mann sheds new light on Hepburn’s complex relationships with gay or closeted bisexual men, including her legendary love, Spencer Tracy—who, Mann reveals, was at least bisexual in terms of his sexual attractions and interactions."