This is what the study actually says about suicide among post-op transsexual people:


“The overall mortality for sex-reassigned persons was higher during follow-up  than for controls of the same birth sex, particularly death from suicide.”

The researchers behind the study explicitly say that research suggests that gender reassignment of transsexual persons improves their quality of life and reduces their gender dysphoria. Given the social harassment and ostracism experienced by trans people,  a higher suicide rate among them is to be expected.

Cristan asked the main researcher behind the study, Cecilia Dehjne, about this. She puts it this way:

As for a claim made by transphobic "radical feminists" -- that the study shows that trans women show “male patterns of criminality” -- Dehjne points out that this only applies to the older data. For the period between 1989 to 2003, you will find no such pattern.


“What the data tells us is that things are getting measurably better and the issues we found affecting the 1973 to 1988 cohort group likely reflects a time when trans health and psychological care was less effective and social stigma was far worse.” 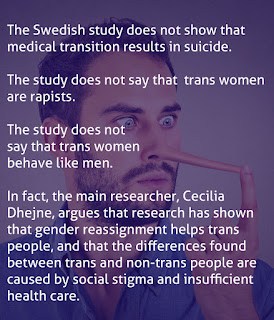 There isn't always a simple to solution to these dilemmas, given the complexity of life and the diversity of  life journeys. Those who have followed this blog for a while, know that I am one of those who -- for various reasons -- have decided not to go down that road.

At the same time we also see an increasing acceptance of the idea that you might transition socially without undergoing genital reconstruction.  But that does not change the fact that many need and are helped by such surgery.

I know that the general consensus among researchers in this field is such surgery most often does help, and that the regret rates are very low indeed (from one to four present). This tells me that the current  attempts to rewrite research in order to prove the opposite, very often are based on a desire to push trans people back into the closet.

If you, whether you are trans or a trans ally, come across people who misrepresent the Swedish study in any way, refer them to this post and/or the following:
This is an extended version of a blog post originally published over at tumblr.
Posted by Jack Molay