Felix Conrad, spiritual leader of the Transcend Movement and crossdreamer philosopher per excellence, has written a new book on sexuality and gender variance called Quantum Desire.

Antonia has asked him a few questions.

ANTONIA: Is it really necessary you write another book on crossdreaming? What’s this...the hundredth?

FELIX: I’ll ignore that! Anyway..it’s the ninety eighth.. Yes...absolutely necessary. Most of my work has been about the seismic tremors of a transgender awakening: trying to understand why I feel that I’m a woman...how valid is that feeling... and how I can live with it? So, basically, they’re about transgender psychology. This book deals with gender variance as a sexological phenomenon.

ANTONIA: And why the change?

FELIX: It’s a question of survival really. The transgender crisis screwed with my mental health and I had to sort it out...and I sort my head out out by writing. Now that I’ve turned a corner with my gender issues I can write something that’s been on my ‘to do’ list for quite some time: a sexological analysis of crossdreaming.

Also, I think that one of the fascinating things I’ve discovered recently is that when I got on top of my gender issues I started to see my desire to change gender as more of a sexual thing. Now, I don’t want to overstate that...because I’ve been irrevocably changed by my transgender awakening - but something’s shifted. It’s this quality of gender variant sexuality that gave me the book’s title: Quantum Desire; as fucking crazy as this may sound...it seems that the way you observe our sexuality can change it.

ANTONIA: But come on Felix, don’t be shy...that’s not the only reason you wrote it...hasn’t there been a certain Spanish beauty who started off this quest?


FELIX: Well, I always try to include a real life situation, and yes, explaining my sexuality to my new girlfriend occasioned this book...but it was a long time coming.

Despite decades of research, commentary, blogging and scientific papers...nobody can say a damn thing about gender variant sexuality with any certainty or without controversy. That’s a scandal...and the main reason is that self-obsessed transgender people like me have cannibalized all the analysis focusing on the transgender angle and our interminable battle with Mister [Ray] Blanchard.

The fact is that there are millions of crossdreamers who have no transgender identity and who simply want to understand their sexual behaviour.

FELIX: Listen, Antonia...if I say to you...faggots like to fuck each other up the ass? Am I right?

FELIX: Exactly. Some of Blanchard’s observations are correct, but they’re intentionally and clearly framed in such a way linguistically to inflict the maximum damage on trans people.

Obviously, as an academic he can’t say ‘fucking’ and ‘faggot’ but by choosing terms like ‘paraphilia’ and endlessly focusing on the masculine frames and faces of older trans women he’s doing the same thing.

I have no problem with theories which postulate the sexual origins of transgender identity but there’s ways to formulate those theories that are respectful and ways that are a kick in the nuts. Blanchard went for the nuts.

ANTONIA: Hold on a minute...are you saying that Blanchard was right but he was just rude about it?

FELIX: Certainly not. Autogynephilia rests upon a causal relationship between the sexual desire to transition and any subsequent transition. This is not only impossible to prove but even if it was -- with no clear explanation of why they had that sexual desire in the first place -- there’s no reason why the sexual urge didn’t originate from a female gender core or other attribute of genuine feminine essence.

However, saying that...and it kills me to say it...the fact is that until we come up with a credible, plausible and compelling sexological narrative to replace autogynephilia, Blanchard will continue to be a large part of the conversation.

ANTONIA: You really think so?

FELIX: Well, look...we’re talking about him..and the cunt hasn’t written a word for thirty years...so we can’t claim to have trumped his narrative. That’s why I really wanted to write Quantum Desire.

Like all my books, it’s just an extended conversation...not academic research...but I hope I can inspire serious researchers to put aside the trans-centric debate and get down to writing a seminal work of sexology on crossgender arousal.

ANTONIA: Ahh...but as I’m sure people are wondering, Felix...is it possible to write a purely sexological account of crossgender arousal?

FELIX: Well, that is one of the questions the book answers. The simple answer is...no...but you can certainly write one that focuses more on sexological discourse than gender theory.

ANTONIA: And what do you think readers will find most surprising about this book?.

FELIX: The sheer cheek of the final chapter. Basically, I attempt to reconcile the unreconcilable: sexological explanations of gender variance with feminine essence..and to be honest, I think I did a pretty good job.

ANTONIA: Well, your readers will be the judge of that. Now I’d like you to tell us about this ‘crossdreamer challenge’ you’ve been talking about. 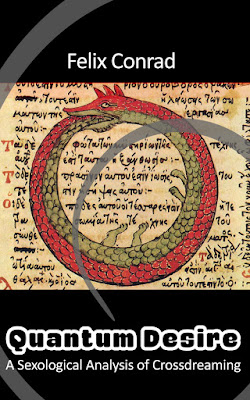 So, I was kind of thinking that everyone could formulate their own answers to the questions in my book. So...it would be super cool if they left in the ‘comments’ section their thoughts about the following….

Crossdreaming is a great colloquial term, but what should be the scientific name for our sexuality?

What is its correct sexological label: Fetish? Paraphilia? Orientation? A.N.Other?

What is the best narrative we can use to briefly and comprehensively describe our sexuality to someone outside of our community?

FELIX: It’s just...I think that maybe we can decide this stuff as a community. Maybe a majority view will begin to emerge and we can all adopt the same terminology.

ANTONIA: Sounds a bit like a referendum to me...and you know how that goes down.

FELIX: Shit...I never thought of that. Imagine...80% of respondents on Jack’s website vote for ‘autogynephilia’ as the best term for our sexuality. A crossdrexit.

ANTONIA: Jack would have kittens! Sorry! What? Why are you looking at me like that?

ANTONIA: You are so fucking weird!

Quantum Desire: A Sexological Analysis of Crossdreaming is available on Amazon

Jack will publish a review of the book in the near future!