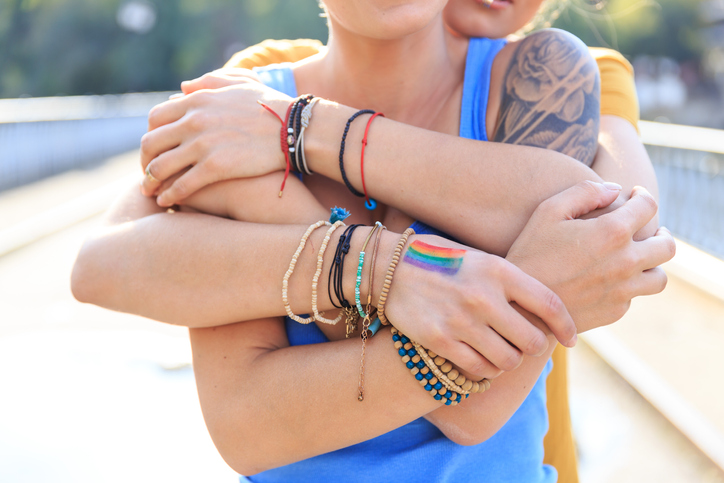 Over at Mel Magazine Calvin Kasulke writes about trans people who seem to change their sexual orientation after transitioning. Research indicates that more than half of trans and gender non-conforming people become attracted to new kinds of people  throughout their lifetime.

The traditional story in this respect is the one about the trans woman who is attracted to women pre-transitioning, but who become interested in men after transitioning. Kasulke, however, documents that trans men may also experience a change in the way they are attracted to other people.

Trans men who have previously been exclusively attracted to women (and have presented as lesbians) may, for instance,  find themselves attracted to men.


Kai, a 21-year-old student in D.C., used to identify as a lesbian — until they started testosterone. Ever since, Kai has retired their previously held lesbian identity, both because they no longer identify as a woman and because they’re experiencing attraction to men for the first time.

“I think maybe before I wasn’t giving myself the option to be attracted to queer men, but now because I’m more comfortable in myself, [my] gender and gender presentation, I’m allowing myself that possibility,” they write via Twitter DM.


Kai is far from the first trans person to experience a difference in their sexual orientation after transitioning. Last year, them rounded up a number of studies tracking the changing realm of attraction many trans people experience: In one study, 40 percent of trans men reported a change in their sexual orientation; in another, 49 percent of transmascs recorded the same.

Sexual fluidity is the norm

One of the studies Kasulke refers to (by Sabra L. Katz-Wise,Sari L. Reisner, Jaclyn White Hughto & Colton L. Keo-Meier) reports that 58 precent of the queer, trans and gender non-conforming respondents had experienced changes in sexual attractions in their lifetime. Among those who transitioned, 64.6% reported a change in attractions post-transition.

As the researchers put it:


Heterogeneity of sexual orientation identities and sexual fluidity in attractions are the norm rather than the exception among gender minority people.

The traditional explanation for such shifts has been that social pressure has caused trans people to repress their real sexual identity.

One example would be trans women who have previously been oriented towards women (in order to appear as straight men), and who now finally allow themselves to be attracted to men. You might say they have been suffering from some kind of internalized homophobia. What they find after transitioning is that they have always been some shade of bisexual or polysexual underneath.


In other words: They haven’t necessarily changed their fundamental sexual orientation. It is more likely that the change reflects some kind of sexual self-discovery.

Many of the trans men featured in Kasulke's article spent years presenting as lesbian, so moving over to another kind of same-sex attraction probably did not entail the same kind of social challenge. Nevertheless, these trans men do challenge the expectations most people probably have about trans male sexuality, i.e. that they should be attracted towards women.

One good example of a similar change in a male to female transgender person is Youtube star Gigi Gorgeous. She started out presenting as a gay man, but ended up in what she refers to as a lesbian relationship. By doing so she debunked the idea that you can understand trans women as two distinct categories based on their sexual orientation.

Attraction to bodies or gender expression?

From what trans and queer people tell me, such changes changes in sexual orientation do not always reflect a change in attraction to male or female bodies. This may just as well be caused by an attraction to masculine, feminine or nonbinary gender expressions, independent of "biological sex".

What this tells me is that any theory on sexuality and gender that reduces both to biological sex will fail to explain what is really going on here.

Unfortunately all the relevant studies define sexual attraction on the basis of biological sex, not identity or gender expression.


I know what you’re thinking: It’s the hormones, right? Not so fast.

“I don’t think anyone knows what factors would cause a change in sexual orientation,” says Joshua Safer, executive director of the Center for Transgender Medicine and Surgery at Mount Sinai.

It may be that taking  hormones may lead to the trans person accepting their true gender and true sexuality in a new way. A more masculine or feminine body may also make it easier for them to live out their sexuality in a relationship, as they will know that their partners see them for who they are, and treat them accordingly.

See also my article on how this kind of diversity debunks the toxic autogynephilia theory, and: