Kourtney Kardashian implicitly debunks the transphobic "autogynephilia" theory in a new article on her Poosh site. She explains why  women may get aroused by their own bodies and sensuality, a kind of sexuality that is used to invalidate the identity of transgender women.
As you might remember the "autogynephilia" theory of Ray Blanchard argues that gynephilic (woman loving) transgender women suffer from an "erotic target location error" whereby they are sexually attracted to the image of themselves as women.
"Auto-gyne-phile" means "Self-Woman-Love".
Their crime is that they may get aroused by the idea of being a sexy, attractive woman.
These trans women are therefore suffering from a "paraphilia", Blanchard argues – basically a sexual perversion driven by a straight, masculine, sexuality.

But what about autosexuality in cis women?

As many have pointed out, this theory presupposes that cis women do not get aroused by their own bodies or by "feeling sexy". Because if they did, that would make this a female sexual trait, and even a human one.

Indeed, if it is found among cis women, you might  argue that finding such arousal in trans women is a clear indication of their female gender identity.

The autogynephilia supporters have dismissed this argument by pointing out that cis women do not have such feelings. They have, for instance,  done everything they can to undermine Dr. Charles Moser's study of "autogynephilia in cis women". In accordance to Patriarchal orthodoxy cis women only get aroused by male bodies "out there", or – if they are slightly more liberal – by female bodies as well. Cis women do not suffer from such "autoerotic" tendencies, as they are, I suppose, innocent and pure.

I would guess that a lot of women have played along with these beliefs, well aware of the fragility of the male ego. If women can get aroused by their own sensuality, who needs a man?
I guess this is also partly why autosexual feelings often are classified as a kind of pathological "narcisssism", instead of a natural and enriching part of normal sexuality. It ruins the simplistic and banal narrative of the other sex being a kind of "magnet" that is attracting a person due to his or her sexual "magnetism" alone.

Research documents a lot of autoerotic fantasies in cis women

Studies of women's sexual fantasies documents that cis women may perfectly well get aroused by the idea of being a sexy, attractive, woman. I doubt very much that the multibillion dollar fashion industry is driven by the need to attract men alone. In fact, many cis men show no appreciation of female fashion at all. I suspect may women dress up because looking good feels good.

You may perfectly well argue against this "submission to a sexist fashion industry" on a political level, but the fact that some women enjoy dressing up does not make them mentally ill.

And it is at this juncture that Kourtney Kardashian presents an important argument. Over at her site Posh she has published an article called "Are You Low Key Autosexual?".

Are you autosexual? The short answer is yes, most likely. In fact, we all are, at least a little. Casey Tanner, therapist, writer, and founder of QueerSexTherapy, helped us define autosexuality as “a trait wherein one is turned on by engaging in their own eroticism.” A prime example of this is simply women in general. While it may not be true for everyone, we generally feel more sexual and turned on when we feel we ourselves are sexy. But it’s not just about the ladies.

Kardashian points out that there is no absolute divide between "autosexuality" and being sexy for and with others. People may incorporate autosexuality into a larger sexual repertoire that also includes being turned on by partnered sex:

This might mean wearing sexy lingerie, even if your partner hardly gives it a second glance. It could mean doing your hair and makeup so that you feel good and turned on, even when you’ve been in a long-term monogamous relationship and the other party hardly notices.

It could mean washing yourself lovingly in the bath and genuinely enjoying your body. It could mean dancing in the mirror in a cute outfit. If feeling sexy independent of someone else has ever turned you on, that’s autosexuality, and it’s totally normal.

"We are sensual beings," Kardashian writes, "so depending on our own sensuality instead of relying solely on others to turn us on has profound power."
The "autogynephilia" theory is used by TERFs to invalidate trans women

Now, the "autogynephilia" theory has been declared dead and void over and over again, but as many ideas born out of bigotry, it refuses to lie down. It might not survive the power of the Kardashians, though.

There are many levels of irony here, including the way many transphobes, TERFs included, have tried to invalidate another member of this family by using the "autogynephilia" theory, namely Caitlyn Jenner.

Kourtney Kardashian makes no reference to AGP in her piece, although Caitlyn may have told her about it. Note also that Casey Tanner is a queer sex therapist.

But here's the argument Kourtney could have made about transgender women:

"Given that the love of ones own body and ones own sensuality is natural and healthy, it should come as no surprise that transgender women feel this way as well. Moreover, trans women who have not transitioned will find it harder to get their real sensuality affirmed by others. Sure, they may have sexual partners, but these are likely to see them as men, which is not the affirmation a woman wants. Because of this the realm of sexual fantasies may become even more important."

Trans activist, scientist and philosopher Julia Serano made the following comment to the Kardiashian revelation over at twitter: 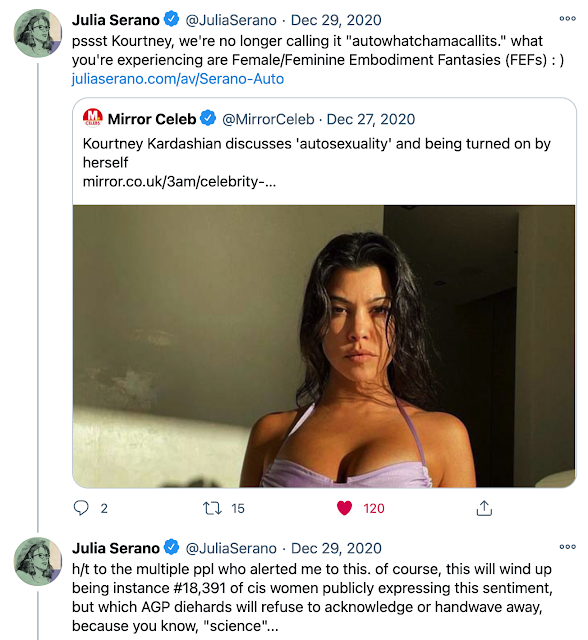 Kardashian is a reality TV star and "influencer", and not a sex therapist. Still, it seems to me that she has taught the general public more about "autosexuality" than anyone before her, precisely because she is a celebrity. All the main popular media channels have been writing about this. like – for instance – the Daily Mail: "Kourtney Kardashian shares an article about being AUTOSEXUAL on her Poosh site: 'It's a trait wherein one is turned on by their own eroticism'".
Expect Blanchard & Co. to move the goal posts. It won't help.
See also: "Julia Serano gives us the perfect antidote to transphobic pseudoscience."
This article is based on a comment posted over at Crossdream Life. Visit that site for some interesting comments from other members.
Posted by Jack Molay