This is a blog that boldly goes where even angels fear to thread. I have decided to cover controversial and "embarrassing" topics, simply because I believe that knowledge sets us free.

I also believe that ethics is not about following rules, regulations and inherited customs. Being a good person is about being able to love others and help them get a good life where they can be whoever Nature or God meant them to be.

This is not about whether women should be allowed to wear miniskirts or burkas or whether it is OK for a grown man to play with model trains. This is also why I believe we have to go into the fantasy life of crossdreamers in order to understand what makes us feel the way we do.

It is interesting to note that even if we live in a society where psychologists and psychiatrists consider a rich sexual fantasy life healthy and enriching, and where most forms of consensual sex are considered acceptable, crossdreamer fantasies continues to be problematic.

One of the reason the more militant "classical transsexuals" try to distance themselves from crossdressers is partly this: They do not want to be associated with men that get turned on by dressing up as women. They believe the very existence of "the transgendered" stigmatizes them as freaks. In order to avoid that stigmatization they would like crossdressers and crossdreamers to climb back into their closets and suffer in silence.

This is of course exactly what society has told both gays and transsexual for ages. My old aunt used to say to me that she had nothing against gay people -- after all, uncle "Freddy" was clearly gay, and he was such a nice man who shared her love of orchids -- but why did they have to talk about it! It was embarrassing to talk about men doing unspeakable acts in polite conversations. 60 years of cultural conditioning had made an otherwise tolerant lady homophobic.

The post I wrote about the Norwegian politician Carl I. Hagen attacking his former son-in-law, now a woman, for causing his grandchildren pain by coming out as a transwoman is another example.

I believe Hagen when he says that he accepts that transwomen cannot be blamed for who they are and deserve our respect. But he is not willing to help change a society that makes the children of a transwoman despise "a man" that dresses up as a woman -- even if he acknowledges that this "man" is in fact a woman!

Those of you who have followed this blog for a while know that I write about men who dream of having a woman's body, or being a woman.

I have written about Ray Blanchard and his autogynephilia theory (autogynephilia=the love of one self as a woman). Blanchard believes this desire is caused by a target location error. The man feels desire for himself instead of the correct object: a woman out there. He is now trying to get autogynephilia into the American Diagnostic and Statistical Manual of Mental Disorders (DSM).

There is a lot to say about theory, and I have already done so, but in this context the most interesting fact is the following: Blanchard wants autogynephilia into the DSM, but he has no parallel condition for women. There is no parallel autoandrophilia (the love of oneself as a man). This will actually be the only "mental illness" in the manual that is sex specific.

Blanchard is not interested in genetic females that dream of having a man's body. I don't think he believes they exist. This is a perversion limited to men only. Well, I believe this blog has proved pretty conclusively that female to male crossdreamers (autoandrophilacs) do exist. So what is it that makes an intelligent man like Blanchard do such an elementary mistake?

Man is OK, woman is not OK

I believe he and most of us are culturally programmed to find men wanting to become women perverts, while women who dream about becoming men are to be admired.

Look at this photo. She is sexy, isn't she? What story does this picture tell us?

Well, to me it is the story of a woman that has shared her bed with her lover and who is now looking up at him with love in her eyes. She is wearing his shirt. The fact that it is too big for her, makes her look smaller and more feminine. And the shirt itself symbolizes their secret community.

Would a picture of her male love wearing her negligee tell the same story? The small negligee would accentuate his strong masculine body, would it not, and him wearing the scent of her perfume would symbolize their love?

The next picture is from the Witchblade TV series where Yancy Butler plays the tough detective Sara Pezini. In most of the series she is wearing jeans, boots and a simple sweatshirt. This masculine attire makes her look strong and powerful, but nevertheless immensely sexy. 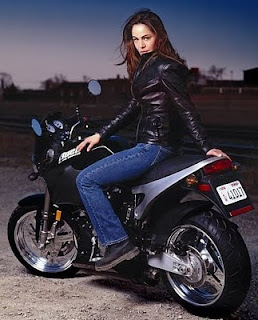 Would David Caruso look equally sexy in a dress?

Logically the answer would be yes, but it isn't. This indicates to me that there are unconscious processes going on that we are not aware of. These processes determine what we consider good and what we think of as embarrassing perversions.

Thomas Walter Laqueur has written a fascinating book about how Western society has considered the role of biological sex throughout the ages.

In the book Making sex: body and gender from the Greeks to Freud he argues that the idea of having two biological sexes is pretty recent. In antiquity, the middle ages and the renaissance scholars believed there was only one sex: the male one.

I'll come back to this book in a later post, but short version is this:

The old Europeans believed the body and soul was the product of a mix of various essences, including the four humors black bile, yellow bile, phlegm, and blood, which again referred to the four elements and their masculine and feminine attributes.

In addition the sign of the zodiac would influence a person's personality. Some of the signs were male and some female. Each person is therefore a mix of various traits, masculine and feminine. In one way the model is a bit similar to the remix model I have presented here at this blog.

A woman's sexual organs were considered the same as the man's, only on the inside. The vaginal canal equaled the penis, the ovaries the testicles and so on. Again, the theory is uncannily similar to the modern one, where the clitoris has the same origin as the penis.

So they did accept that a man had female traits and visa versa. That did not mean that they considered the two genders to be equal, however.

A woman was a man with too little fire in her body. A lack of blood meant a lack of heat, and given that fire was the upper, superior, element (the one moving up to the stars, which symbolized spirit and intellect), this meant that woman was an inferior version of man.

We have a lot of reports if sex changes in pre-modern times, and the doctors did not find them strange. Add the necessary heat and a woman can become a man. Her vaginal canal would pop out of her body and become a penis. A man, however, could never become a woman. That would mean a reduction in life force and perfection, and that was medically impossible.

A man who wanted to become a woman had to be a pervert and a sinner. 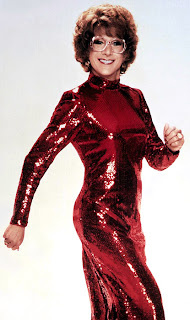 After all, he wanted to lose his freedom, and become physically weak, mentally feeble and submissive, and no sane man would want that.

The old prejudices are still with us

I live in a country that probably is the most equal of all gender wise. Young Scandinavian girls take it for granted that they have the right to become whatever they want. They may not choose to become fighter pilots, but they know that they have the right to become one. However, even in such a society it is hard for a man to take on the female role. There are very few male nurses and kindergarten assistants.

I believe we are seeing the effect if subconscious archetypes that continue to affect our judgment even if we consciously know that the genders are equal. And I believe that these subconscious mental structures -- which are partly instinctual and partly cultural -- also influences the dreams and fantasies of crossdreamers.

I think it is time we took a closer look at these archetypes, so that we can come to understand why crossdreamers feel the way they do. And if we are to do that, we also have to look at the embarrassing stuff.

That's what I am going to do next. Be warned! 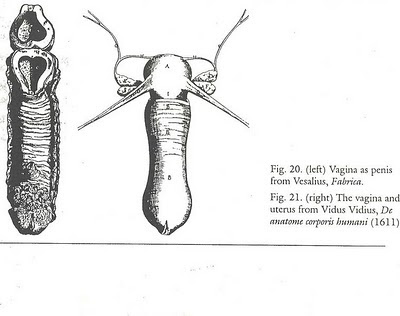 Image from the book by Thomas Laqueur. It documents what the 17th century scholar considered the similarity between male and female sex organs. Scientists have often found what they were looking for, even if it wasn't there.

Today scientist believe the clitoris is the female parallel to the penis.
Posted by Jack Molay