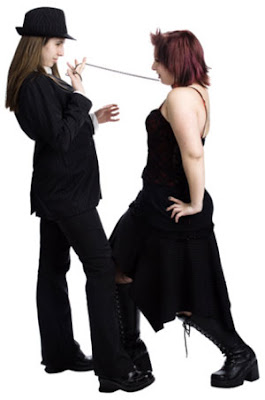 I got an interesting question in the mail the other day, and I would like to share it with you. Anonymous 22 asks: Why is it that most crossdreamers seem to be sexually submissive?

"While I haven't seen anyone definitely state such, it seems every AGP fantasy I've ever heard of, both personal fantasies and those in the form of written fiction, frequently use themes of submission as a component of the wish-fulfillment.
I've seen some people suggest this is so those who have such fantasies don't have to feel guilty about them, and also, as I think you may have spoken about on Crossdreamers, as the submissive element can sometimes function as a tie-in to femininity.

In addition, I have heard many personal stories on blogs, and such, wherein the writer suggests that in addition to being autogynephilic, he is also generally sexually submissive.

So here is my question: Out of curiosity, have you ever encountered anyone who is both autogynephilic and tends towards sexual dominance in their fantasies?

It seems to be a very odd mix; as far as I can tell, I may be the only person who has both; and I tend toward both quite strongly. With 20/20 hindsight, I can trace both elements back to at least puberty; the AGP back even further.

As you might appreciate, it leaves me feeling a little left out amongst fellow compatriots. I have never had a single submissive AGP fantasy, and there is little that interests me less than even mild themes of forced feminization!"


Here is my response:

Yes, I have heard of others that do not fantasize about submission. As regards the TG fiction area, I have also read quite a few transformation stories that do not include this theme. Finally, when looking at avatars and personas used by crossdreamers online, only a minority stress the submissive streak. That is: they may write stories about submission, but the female persona they present online is not submissive.

This leads me to believe that submissiveness is not a essential part of M2F crossdreaming, and the fact that so many of us crossdreamers believe so may be due to gender stereotyping.

In our culture feminine is associated with submissiveness and masculinity with dominance, to the extent that even scientists look for these traits when studying men and women. However, anyone who bothers to lift their noses up from their peer reviewed papers and look around will see that women can be as dominant as men, and that real men can be as kind and loving as lambs.
Unfortunately, stereotypes helps us navigate a chaotic world, and most of us seem to be willing to accept a certain intellectual laxity in exchange for a false feeling of security following stereotypes may give us.

Another reason for the association of femininity with submission is our interpretation of the sexual act. We tend to describe the female act as "passive", while the male role is "active". The reason for this is that the man more often does the thrusting, I guess, and the thrusting part is considered active, while a woman's moaning, wriggling, scratching and bucking is considered passive.

Moreover, the popularity of the missionary position often puts him on top, and in our culture being on top is considered dominant. In real life, of course, the one lifting or upholding may be as important and influential as the one pushing, but we do not see that due to the symbolic nature of hierarchies.

So if a woman seduces a man, drags him back into her apartment, rip off his clothes... well, it does not matter if she is the one lying on her back during intercourse. She is still considered submissive. Women on top are not considered dominant, either, just sexy. Go figure.

Again, this is a cultural interpretation. You may easily turn this interpretation on its head: The woman is the dominant one. She has full control over the man as she is the one that lets him into her body. The man, on the other hand, is very vulnerable as he is giving her control over one of the most vulnerable parts of his body to hers. In fact, many men feel a strong fear of the vagina dentata . This is a kind of castration anxiety.

So why do so many crossdreamer fantasies include submission? There may be many reasons. Here are some of my hypotheses:

1. Some crossdreamer are naturally submissive. This is a personality trait of theirs - a trait found among both men and women.

Men can perfectly well get away with being submissive in real life, but the M2F crossdreamers have an additional gender identity problem. This makes them overcompensate. They repress their submissive site in the face they show the world in order to hide their transgender condition, and this repressed libido returns in dreams and fantasies as forced feminization.

2. Some crossdreamer's personalities have a mix of submissive and dominant traits. Still, the submissive traits are more likely to be hidden in their public persona. Again, the repression forces the urge for surrender to resurface as feminization fantasies.

Given that submission and femininity are associated in our culture, it makes sense for them to let their inner woman play the role of the submissive one. They fantasize about being women, and they have been told repeatedly that this is the way women are supposed to behave.This may even lead to a strong envy of women: Women are allowed to be submissive, men are not.

3. Many crossdreamers suffer immensely from not being able to harmonize their inner personality with their outer presentation. As you point out, they also suffer from guilt and shame.

Which leads me to my conclusion: Being a non-submissive M2F crossdreamer is not that rare. There is something in your personality and life experience that makes the idea of submission less attractive. You have this in common with many M2F crossdreamers as well as many genetic women.

(I promised A22 to ask you: How many of you dream about being the dominant woman?)
Posted by Jack Molay