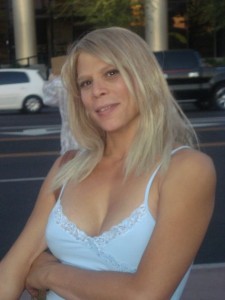 Dyssonance describes herself as a "multi-ethnic, early Generation X, native Arizonan writer, 3D artist, sociologist and psychologist who rarely cleaves to the standard party line for any group."

The interview is relevant to my previous post on the conflict between so-called "Classic Transsexuals" and the rest of the transgender community.

Dyssonance represent their exact opposite, a transwoman that would like to unite the various types of transgender people under one banner.

She has written an interesting summary of her own debates with the CT crowd:

"[This debate] is about the right to determine who is and who isn’t a transsexual.

They want to say that if they are left alone (well, transgender is an umbrella term for everyone but this group of some transsexuals right here is what they want said) they will leave us alone.

The problem is that when you tell them that all they need to do is go away and ignore us, then they suddenly say 'well, no, it’s also about how you embarrass us. You need to stop using transsexuals whenever you talk about transgender people.'

You argue that point, and suddenly it becomes 'No, because you aren’t a transsexual, You are a transgender.'

And if you piss them off, you get called a non passing transvestite hooker pretending to be a transsexual.

If they really get a hard on for you (pun intended), they misgender you, calling you sir or man."

And that, being addressed with the male pronoun, has happened a lot of time in Dyssonance's own online life.

In the interview she asked about where sees see the trans community at the end of this decade and beyond.

"In-community, I think we'll see a division that becomes stronger as the various gender variant groups fund their own language outside the binary that many transsexual people feel is best for them. I'd like to say that I also see many of the APA estimated 2-3% of the population that is CD [crossdresser] but not transsexual emerge and step up, which will have an effect on the transsexual dominated forms of discourse surrounding political efforts.

“However, I fear that the intense degree of internalized stigma in that community will continue to limit them, especially when combined with a high degree of stigma within the overall 'full time' trans community. Reminds me of the 'weekend warriors' in fighting between the regular Army and the NG/AR units before the Gulf War pointed out they all bleed red just as easily."

In other words: She does see the possibility of crossdressers and crossdreamers getting some more respect if we start making ourselves more visible, but it is a long shot.

I would add: for that to happen, we would have to be as respectful to others, as we want them to be to us.

Here are some of Dyssonance's other posts that might be of interest to you:

Internal trans warfare: Some Insights (on using the term transgender as an insult and the Classic Transsexuals)

Transgender (Golden Calves, Part III) (on the non-transsexual parts of the transgender community, including crossdressers and "autogynephiliacs")