The Transgender Historian Zagria, Part 1: "A Gender Variance Who's Who" 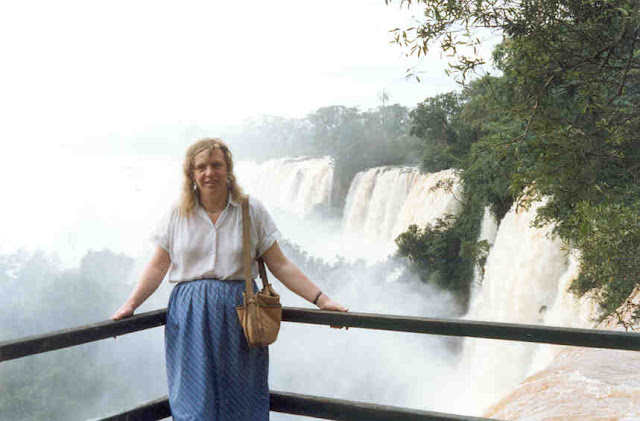 Zagria is, as far as I see it, one of the most important transgender historians around. She is running “A Gender Variance Who’s Who”, an amazing repository for transgender history. The site contains a large number of posts, over 1500, about transgender and gender variant people from all over the world, spanning centuries.
We talked with Zagria about the site, her work and important transgender issues. Here follows part 1 of the interview.
(Above: Private photo of Zagria at Iguazu Falls in 1989)

A site about transgender history

How did you come up with the idea of starting a site about transgender history?


A major influence was Kay Brown’s Transsexual, Transgender, and Intersex History web site. I quickly noticed the narrow range, but thought that the basic idea was good. I had made an HTTRACK [web site copier] copy so could still refer to it when it was taken down.

Now of course it is available to all via the Wayback Machine.

I cannot help thinking that finding information about all these transgender and nonbinary people, and writing about them, must require a lot of research. How do you identify the people you are writing about, and where do you find the information you need?

Yes, a lot of research indeed. Basically I read widely. Sometimes while researching A, I encounter B, and follow up B and encounter C. I find inspiration from books, news articles, academic journals, academic theses, the internet, gossip, history, transphobic sites etc.

It is nice to discover someone while reading a book not about trans history at all. Such as Dudley Clarke, whom I discovered in a biography on the mid-twentieth-century popular novelist Dennis Wheatley, Charlotte Bach whom I discovered in Colin Wilson’s Mysteries, or the trans candidates for being Jack the Ripper.

There is a lot more information out there than there was 13 years ago. Google even suggests which books discuss a person or topic. However the amount of data is itself a growing problem, and results in a lot of reading before I can write something.

As I am not associated with a university, access to journals was a problem. An academic friend allowed me to use his library ID and I was thereby able to access journals until he retired and the ID stopped working.
However these days almost all journals and even many books are available via TransReads, LibGen, Academia.edu, ResearchGate, Erudit, etc. Increasingly academic theses are available online, and older ones were available – until recently – at the UCalgary Gay, lesbian, Bisexual, Queer, Transgender & Two Spirit Info Site (Archive).

I was frustrated when Google News was restricted. However we now have the Digital Transgender Archive which would be worthwhile for the issues of Drag Magazine alone, but has so much more.

I managed the cost of books by buying only one a week or so, and by waiting until I could get it for $20 or less (usually AbeBooks or Amazon Marketplace). If you buy a 1,000 books at $10 on average, that is $10,000. Therefore I must be careful. However by spreading it out, I acquired most books that I need for less than some people spend on beer. There is of course no chance of selling them for what I paid.

Some books I got via libraries. However some were not available and were also overpriced. The major bias in my work is that it lacks information found only in overpriced books, although where it is only a few pages, I was often able to read it via Amazon or Google Look Inside.

One trans woman, of significance to our history, wrote to me suggesting herself and her autobiography. Sure, I said, send me the PDF. However she wanted me to buy her book, from a non-secured website. She wanted €37 – which I would never pay for an autobiography. In the end I did write her up, using the information on her website and in various newspaper accounts – but without reading the autobiography.

How to choose whom to write about

At present I have a long to-do list, much longer than I had in 2007. There are several articles that I did many years ago that need to be redone because books came out later that provided a lot more information: for example David Martin, Donna Langan, Lou Sullivan - and I have just finished a rewrite of Liz Eden in time for the anniversary on 22 August.

How do I choose whom to write about?
Interesting story,  significant to trans history; there are misconceptions or even lies that need to be corrected; a trans perspective is needed – I wrote on Janice Raymond because the Wikipedia article did not reflect a trans perspective at all (why do many trans writers still prefer to link to the Wikipedia version on Raymond instead?).
Sometimes I go back to notes that I made 10 years ago or more and check if the amount of public data on a person has increased.

In addition: Unless I can do better than the Wikipedia version, I leave it alone. But it is usually easy to do so.

Sometimes, after putting off writing about a topic because there is too much to read, I will find a writing that partly covers the topic, and that gives the boost that I need. Examples: Laura Wexler’s article on the Johns Hopkins Clinic in Baltimore Style Magazine; Brian Lentelme’s article on Sally’s Hideaway in Ladylike; Patrick Califia’s summary of Renee Richard’s autobiography.

Finally, my husband, who is proficient in several languages, has helped with foreign materials like the many Spanish articles on trans, books in French about Violette Morris, etc.

Do you have problems with plagiarism?

There is no paywall or even a request for donations on my site. It is free for all to read.

In the menu across the top there is an item: Permissions for Copying.

Mainly it says: “If you copy one of my articles, please copy less than the full article, the paragraphs that are most interesting from your perspective, and send your readers to my site for the full article. Always be careful to give the correct web address, and not an RSS feed address.”

Sometimes this has been ignored. Examples:

A man called Pat Buckley, who claims to be a Bishop, has copied the entirety of my article on Elizabeth Moberly. He pretends to link to me but writes ‘bligspot’ not ‘blogspot’. I wrote him a friendly email pointing out his ‘typo’ – but he chose not to answer.

There is a trans history by Micheline Johnson which has cut and pasted freely from my encyclopedia, and then excluded me from her Bibliography.

I have a bigger problem with the opposite, being disregarded. I include all previous relevant work on the topic in my bibliography at the end, even those that I dislike.
I frequently find writings that would have benefited from including information from what I wrote, but simply ignore it even though a few minutes googling would find it.

Examples include Christine Burns’ Trans Britain, Julian Gill-Peterson’s Histories of the Transgender Child, Dana Bevan’s The Psychobiology of Transsexualism and Transgenderism, all those writers who persist against much evidence in proclaiming that Hirschfeld coined the word ‘transvestite’, and far too many Wikipedia articles to list, but I would mention those on Roberta Betty Cowell, Harry Benjamin, Lili Elevenes (Elbe), surgeon John Brown and Rupert Raj.

Are you criticized for including the 'bad trans persons', murderers and so on?

Every now and then. The Encyclopedia is not meant as an apologia for trans people, but as a demonstration that trans persons like everybody else are diverse: good, bad, emotional, stoic, angry, sad, clever, stupid, lazy, hard-working, etc, etc.

Incidentally, the trans who are murderers, or are accused thereof, are among the most popular of my articles. Along with persons in showbiz.

Which historians are you most influenced by?

I am probably a social constructionist, but definitely not a Foucaultian. There is a far superior model of the social construction of gay and trans in the work of Randolph Trumbach, who shows how modern ideas of sex and gender evolved in the 17th and 18th centuries, and how these changes interconnect to how heterosexuality and marriage were changing at the same time.

Unlike Foucault, Trumbach did not dramatically die from AIDS caught in the San Francisco bathhouses, but he has produced a body of work that meticulously explains how sex and gender has changed over the last few centuries, rather than merely asserting as Foucault does.

A second historian is Colin Wilson. An odd choice in that he is neither gay-positive nor trans-positive, and as he recounts re Charlotte Bach, was quite naïve re gender transition. However his history of sex is an alternate social construction, and some of his insights are worth paying attention to.

It is not that long since the most prominent trans histories and theory were by cis men and women. Are we now to call that cisplaining? They certainly leave much to be desired.

Trans persons have been writing on transness since the 1940s, although the early ones were theory rather than history: Michael Dillon’s Self; Oakley (Sex Change and Dress Deviation); Turtle (Over the Sex Border).

As I have made clear in my reviews, I do not agree with or follow any of them – you can see the reviews for details.

In recent years there have been regional or city gay and lesbian histories, particularly in the US. These often have trans content that is otherwise unknown. We need more local trans histories. I have written timelines for Atlanta and Seattle-Portland. I have also started such for Argentina, northern England, New Orleans and Hungary.

It is fairly easy to do the first 80% or so of such timelines, but then there are persons or events that require as much work as writing about them as a separate entry. The timelines for London and New York would be practically book-length.

Two local trans histories of note are the ones for Ottawa and Manchester.

What is the sort order of the occupations in your index?

I needed another approach. I was aware of the so-called Trifunctional hypothesis (more) associated with Georges Dumezil. The hypothesis posits three castes or functions in traditional Indo-European society:

a) sacral (which subdivides into kings and priests)

This is probably a good place to mention that the index (all three of them) are the best ways to navigate through my encyclopedia.