Autoandrophilia, on women who fantasise about having a man's body 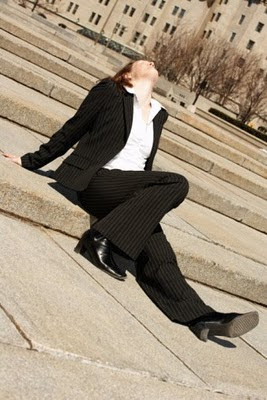 This is a blog about autogynephilia and about men who get turned on by imagining themselves having a woman's (Greek: gyno) body.

From time to time this questions pops up: Are there women who get turned on by the idea of having a man's body?

A search for autoandrophilia (Greek aner, man) on the Net brings up very little, however, and in many cases the term is used for gay men who tries to impersonate the men they are attracted to.

Given that Blanchard and his followers only studied M2F transsexuals when discussion eroticism of this sort, there hasn't been much discussion online regarding this phenomenon either. It apparently isn't controversial enough to merit much activism.

Then there is the problem of identifying female to male crossdressers. Nowadays it is very easy for women to crossdress without being "outed". Jeans and a T-shirt? Works fine. She can even wear a suit like attire and look very business-like, yet feminine. (The tie would be a dead giveaway, though).

All of this has led some to doubt the very existence of autoandrophilia. Apparently, we still are culturally inclined to believe that "fetishes" and "perversions" are limited to the XY part of the human race. Women are pure, men are pigs. A parallel phenomenon is found in the male idea that gay male sex is disturbing, while lesbian sex is OK.

Anyway, I have found a few reports on autoandrophilia among heterosexual women, and I take the liberty of giving a few quotes below.

The first ones are fetched from Dr Tracie O'Keefe's Autogynephilia and Autoandrophilia in Non-Sex and Gender Dysphoric Persons.


Clair was married to a man with autogynephile fantasies. Sometimes he wanted to play out the role of being a man in bed.

"She enjoyed having sex as a woman with men but also particularly enjoyed living out her sexual fantasy of being male with a penis. She was a self-declared bisexual who, apart from having sex with Robert [her husband] and other couples, would also go off to visit female sex workers herself. She particularly enjoyed the fantasy of raping someone else. This was generally played out with female sex workers who would be accommodating and compliant with the fantasy to her satisfaction. The only male she carried out this sex fantasy with was her husband Robert and at the time of penetrating him she said she clearly envisioned herself as a man with a penis, dominant, powerful and aggressive. Clair was quite clear that although she might run these fantasies in her mind they were just sexual fantasies. "

She had no wish to become a man in real life.

She had found her fantasies during sex, particularly visualisations and kinesthetic imagination, about her having a penis very distressing.

"During psychotherapy Suzie decided to split up with her boyfriend and leave her parents' home to try and explore who she was and what might be available to her from life in a wider world. The penis fantasies that only happened during sex did not diminish but she was quite sure that it had nothing whatsoever to do with her experiencing sex or gender dysphoria or wanting to be a man."

Shelia described herself as "a twenty-three-year-old confused bisexual with a big question mark".

She had a boyfriend with whom she had a traditional "passive" love life, but where also having secret affairs with women without her boyfriend's knowledge.

"She found her elicit affairs with women, however, very raunchy and she always played the dominant role, often role-playing herself as having a penis and behaving almost like a man. She commented, however, that, although she imagined having a penis, wearing a strap-on and having sex with women with it, there was still part of her that wanted the sex to be lesbian sex because that was part of what got her excited.

By the way, having sex with a woman did not count as cheating in her book!

There are also lesbian autoandrophiliacs.

"This highly educated and enormously well read forty-eight-year-old woman 'queer identified dyke' (participant's words) lived alone but was in a very rewarding successful two-year relationship with a woman of her own age. She also reported that she had slept with men and very much enjoyed the experience."

O'Keefe reports that when Julia was younger she had felt disappointed that she had not been a boy, often passing as a boy and being pleased by that. She had imagined having a penis and said if she had access to male hormones she might have considered taking them.

"It is not that we want to be men," she said. "We are enjoying as part of our rich and varied sex lives fantasy games that involved exploring male energy through homoeroticism and I can do that because I am now powerful as a female."

The problem with this research -- as with so many of such studies -- is that they focus on people who have applied for sex reassignment surgery only. They do not cover the lives of all those transgendered people who do not ask for such treatment. This means that you do not capture those that actually manage to include their crossexuality in their love life.

J. Michael Bailey has collaborated with Meredith L. Chivers on a paper on "Sexual Orientation of Female-to-Male Transsexuals: A Comparison of Homosexual and Nonhomosexual Types". Yes, this is the same Bailey that wrote controversial "Queen" book on autogynephila.

The gynephilic, woman-loving, F2Ms were found to be more masculine-oriented than the androphilic and bisexual F2Ms. According to this research gynephilic F2M transmen had been more cross-gendered in childhood and preferred more feminine partners. They experienced greater sexual rather than emotional jealousy, were more sexually assertive, had more sexual partners, and had more interest in visual sexual stimuli than the androphilic, man-loving, F2Ms. With respect to treatment, they had a stronger desire for phalloplasty [getting a penis].

In short: the gynephilic F2Ms seem to adhere more closely to the stereotypical behavior of men.

This is what they say of transsexuals in general (i.e both M2F and F2M).

"In this study the two subtypes were indeed found to differ on many characteristics. Replicating some of the previously observed differences, we found that compared with nonhomosexual transsexuals, homosexual transsexuals reported more cross-gendered behavior, appearance and preference in childhood, and they reported less sexual arousal while cross-dressing in adolescence, applied for SR at a younger age, and fewer were (or had been) married.

Unlike Blanchard et al. (1995), we found no differences in height, weight or BMI [body mass index]. Contrary to our expectations, we found the homosexual group not to be different from the nonhomosexual group in the extent of gender dysphoria and body dissatisfaction at application. Despite a less extreme cross-gendered childhood, the nonhomosexuals seemed to suffer no less from their situation than the homosexuals, while having an equally strong aversion to their sex characteristics when they applied for SR [sex reassignment surgery].

This is what they have to say about the F2Ms in particular:

"Unlike their male counterparts, nonhomosexual FMs [man-loving female to male transsexuals, i.e. those that could be considered autoandrophiliacs] appear to suffer so strongly from their gender dysphoria that they apply for SR in young adulthood, despite their less extreme childhood cross-genderedness compared with homosexual FMs. As sexual arousal while wearing men's clothes is almost absent in adolescence, other factors must contribute to the development of their SR [sex reassignment] wish.

Our data show higher levels of gender dysphoria in both FM groups than in the two MF [male to female] groups, but they do not provide indications of what those other factors might be.

It is of interest, though, that a few FMs reported to have been sexually aroused in adolescence when dressing in male cloths, as this has never been reported before. Furthermore, the more favorably appraised appearance in both FM groups probably facilitates living in the opposite sex role, increasing the chances of and possibly explaining a similar age at application for SR."

What does it mean?

Could the very existence of autoandrophiliacs be of help for autogynephiliacs? I think so. There is so much guilt and shame involved with having AGP fantasies, especially when it comes to initiating relationships with women.

Of all men I suspect autogynephiliacs are most likely to worship women in such a way that they forget that women are human too. There are differences in the psychology of men and women, but women also have most of the strengths and weaknesses men have. It helps to know that there are also women with secrets of this kind. That makes it all less dangerous.

O'Keefe's message is useful also in another way. Her's is the message that a lot of women and men have these fantasies. It is normal. Still, since nearly all of us keep quite about them, we tend to believe that we are the only "freaks" around.

According to O'Keefe we are not freaks, but natural expressions of the variety of life. I kind of like that.

May 2019 UPDATE: New post on women who have sexual fantasies about being men.