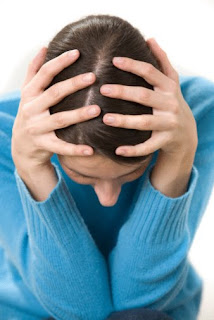 In 1987 Dr. Brian G. Gilmartin published a book called Shyness & Love: Causes, Consequences, and Treatment (available for free online), which presented the term "male lesbian".
It is probably the "male lesbians" that makes the book especially interesting for the readers of this blog, as many of you are woman-loving men who'd love to take the role of the woman in the sexual act.
However, when reading many of the crossdreamer life stories I find in this blog, in emails and in research I also see that there are a lot of socially inhibited persons among the crossdreamers/autogynephiliacs.
Not all biologically male crossdreamers find it hard to approach women. Nor are all love-shy men into feminization fantasies, but there seem to be an interesting overlap that deserves further study.
Well researched
Shyness & Love is a well researched book. It gives a good overview of the research on shyness up till that time, and also includes an original and extensive survey of what he calls "love-shy men".
The fact that it also contains chapters on astrology, karma and reincarnation, however, means that it has not been given the attention it probably deserves by other experts in the field. Any association with "New Age" is a kiss of death in traditional scientific circles. However, the book makes sense even if you disregard the few "unorthodox" parts of the publication, so I believe it deserves to be taken seriously.
Moreover, many "love-shy" men have embraced the book, as it is one of the few that seems to make sense of their lives. That means a lot to me.
Who are the love-shy?
Gilmartin explains that love-shy people are men and women who find it extremely hard to approach the other sex, in spite of the fact that they long for such a relationship more than anything else.
In his study Gilmartin only includes heterosexual men.
There are six criteria for being a love-shy man, according to Gilmartin:
In a modern Western cultural context most of the love-shy are men, as women are not -- to the same extent -- expected to be assertive in love.
Gilmartin makes the following argument:
"In American society some degree of shyness is considered tolerable and even quite socially acceptable in females. In males of all ages from kindergarten through all the years of adulthood, in contrast, shyness is widely viewed as very deviant and highly undesirable. Moreover, shyness in males inspires bullying, hazing, disparaging labeling, discrimination, etc. In females shyness is often looked upon as being 'pleasantly feminine' and 'nice'."
Shy women are just as likely as non-shy women to date, to get married, and to have children, according to Gilmartin. Love-shy men find it much, much harder to lose their virginity, find love and get married.
I am not sure love-shy women find life as easy as Gilmartin may imply, but there is a difference, and that difference tells us a lot about the main problem of the love shy man: Society expects him to be assertive, proactive and adventurous vis-a-vis women. By nature, however, this man finds it extremely hard to live up to this stereotypical image of what it means to be a man. He is shy and introvert and would prefer to play the traditional role of the woman in the game of courtship.
He is a prince waiting in his castle. In a fair world the beautiful girl would come riding like a female warrior in shining armor. She would open the door and wake him with a kiss. Given the gender roles of modern day America or Europe, this scenario seldom adds up. He is sitting alone in his emotional fortress, while the love of his life sits brooding in another castle, unless -- of course -- Dr. McDreamy has not already broken down her walls and swept her off her feet. McDreamy often does.
Gilmartin believes that as many as 1.5 percent of American males are love-shy.
Love-shy factors
Gilmartin has a long list of factors that make love-shy men different from other men. It may seem like a haphazard kind of list, including far too many variables, but I think he is on to something. It makes sense to me that there is a group of men who have many of these factors in common, maybe because I have been one of them myself.
Relationships
On the relationship to women and men:
The interests of the love-shy:
The psychology of the love-shy:
The birth family of the love-shy:
Non-masculine gender role identification

Love-shy men do not identify with the typical male gender role of modern Western society. In fact, they hate it. Gilmartin argues that love-shys usually renounce aspects of the masculine sex-role stereotype.
"Love-shy men hate football, baseball, basketball, weight-lifting, beer-drinking, swearing and carousing with same-sexed assoctates, etc. They are far more likely to be interested in 'settling down', and in the sorts of things women are likely to be interested in."
Love-shy men do not normally hide their hatred of the stereotypical male role. Gilmartin is probably right when he says that such honest and open self-revelation frightens women away when it occurs early on in a relationship.
Moreover, expressed disinterest in and hostility towards prototypically "masculine" sex-role activities and interests is also quite likely to be regarded as weird and strange by a woman. Indeed, one of his points is that the love-shy men may appear strange and socially awkward.
The male lesbian

Gilmartin does not write about crossdreaming or autogynephilia in the way I have presented this in this blog. He does not focus on the erotic fantasies of the love-shy, so I have no way of proving that there is an overlap between his category and the crossdreamers.
Still, there are some very interesting similarities. This is what he says about a sub-category of the love-shy men (p.125):
"...a 'male lesbian' is a heterosexual man who wishes that he had been born a woman, but who (even if he had been a woman) could only make love to another woman and never to a man. Unlike the transsexual, the 'male lesbian' does not feel himself to be 'a woman trapped inside the body of a man'. Moreover, none of the love-shy men studied for this research entertained any wishes or fantasies of any kind pertinent to the idea of obtaining a sex change operation. All wanted to keep their male genitalia; all wanted to remain as males. However, all deeply envied the perogatives of the female gender and truly believed that these perogatives fitted their own inborn temperaments far more harmoniously than the pattern of behavioral expectations to which males are required to adhere."
Since they could not be a woman, most of them visualized themselves as a man romancing a beautiful woman.
" He is a person who had always felt rather strange, detached, and disinterested around age-mates of his own gender, and who had always entertained the fantasy that if he could only win acceptance from an all-girl peer group he could feel 'at home' there. The 'male lesbian' state of consciousness may be related to inborn temperament, and may at least partly explain why the love-shy men tended to have become very romantically attracted to girls from an early point in life."
Note that in his survey Gilmartin focused on heterosexual male virgins. He deliberately excluded homosexual men from his study:
"Interestingly, 94 percent of the love-shy men who were interviewed for this study turned out to be strong believers in homosexual rights. Yet at the same time every single man interviewed for this study indicated disgust at the mere thought of kissing or making love to another man... Loving and romancing a beautiful woman was the only thing many of these deprived men ever seemed to think about in their almost incessant fantasies and daydreams."
So, the male lesbian does not want to play with males, does not want to experience sex with males, and does not have male recreational interests. He is actually so alienated from the very idea of being a man that he does not even want to procreate male children:

"The vast majority of the love-shy men interviewed for this book confessed that if they ever did become fathers they would want to have girl children only—NO BOYS. In stark contrast, only one percent of the self-confident, non-shy men felt that way. In fact, the non-shy men preferred the idea of fathering male children to the idea of fathering female children by a ratio of almost three to two."
My guess is that he finds the very idea of tackling a rough and tumble boy impossible. After all; He fears them or even detests them. Or maybe he does not believe that he can serve as a good role model for such a boy, and that the kid would end up in the same situation as himself.

Gilmartin argues that the love-shy men studied for his book all reluctantly accepted the fact that they are males. He says that none of them had ever revealed any transvestite tendencies:

"...none of them had ever experienced any urge to dress up as a woman or to put on lipstick or nail polish, etc." (p. 126)
He has not asked them about erotic feminization fantasies in general, however. The concept of autogynephilia had not been invented when he wrote the book, so it would be hard for him to ask. In fact, his understanding of transsexuals is also somewhat simplistic, as he seems to believe that all transsexuals are androphilic. This is not correct.
I suspect there may be crossdreamers among his respondents. The fact that I have had several emails from love-shy men urging me to write a post like this one, strengthens this belief, as does the fact that I recognize myself in many of Gilmartin's descriptions.
I need to stress, however, that from what I see in the research and from the comments made at this and other blogs and in other forums, there is no reason to believe that all crossdreamers or autogynephiliacs are love-shy male lesbians. Many crossdreamers report an active sex life from a very early age. Some of them are promiscuous, even, and a large number of them get married and have children.
All of this points to an underlying variation where love-shyness may be one of many factors that can be associated with crossdreaming.
Gilmartin gives an explanation for love-shyness that may give us an indication for why this is so. That's the topic for my next post.
Postscript on male lesbians:
Note that the term male lesbian has been used for men who are clearly not love shy, or who at least are not love-shy anymore. 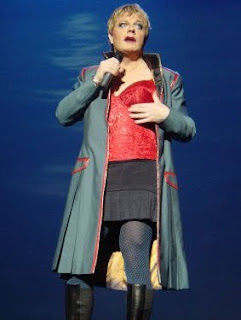 The British comedian Eddie Izzard (pictured right) calls himself a lesbian trapped in a man's body. He may perfectly well be a crossdreamer, but it would be very hard for a love-shy to go on stage like that.
The "male lesbian" Lisa from the American TV series The L Word is definitely not love-shy!
Go to part 2 of this post!
Resources:
Download Dr. Gilmartin's Shyness and Love: Causes, Consequences, and Treatment
The Love Shy Survival Project
Love-shyness on Wikipedia
Love-shy.com
Love shyness: the 'condition' crippling men (Times Online)
Posted by Jack Molay