Effeminate men get the girls in rich societies 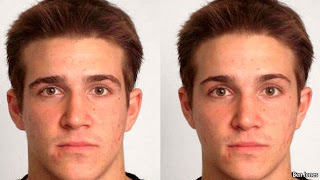 Just a short little update from the world of science.
In the snappy titled paper "The health of a nation predicts their mate preferences: cross-cultural variation in women's preferences for masculinized male faces" Lisa M. DeBruine, Benedict C. Jones, John R. Crawford, Lisa L. M. Welling and Anthony C. Little of the Face Lab have looked at women's preferences for men.
Do they like them rough and masculine or more feminine looking?
Turns out there is an inverse relationship between women’s preference for masculine features and national health.
The Economist reports:
"In environments where disease is rampant and the child-mortality rate is high, women prefer masculine men. In places like America and Britain, where knowing how to analyse health-care plans is more important than fighting off infection, effeminate men are just as competitive."
In science speak:
"These findings show non-arbitrary cross-cultural differences in facial attractiveness judgements and demonstrate the use of trade-off theory for investigating cross-cultural variation in women's mate preferences."
The argument is apparently that the craggy physical characteristics associated with masculinity indicate a strong immune system. But such men are also more promiscuous and do not care as much about long-term relationships. So with a good public health system women go for the faithful feminine men.
The women were asked to look at manipulated photos like the one above and tell which one they found the most attractive. (More images here.)
I guess this explains why all the rough and tumble boys in America are against Obama's health plan. Before you know it the sissies will have taken over the whole country!
See also the Guardian: Masculine faces appeal most to women in countries where disease is rife
Posted by Jack Molay