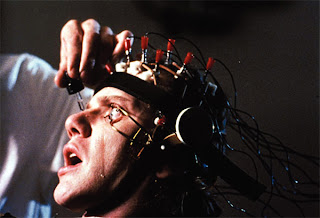 I am doing a lot of searches for academic papers on autogynephilia, transsexualism, transvestitism and the like, in order to see if there is anything that can be of help.
Sometimes I come over the most amazing research.
I think the following abstracts could speak for themselves.
Still, just to make sure: The original papers were published in the seventies, at a time when the experts continued to believe that crossdressers could be treated with aversion therapy.
At the time these papers were written behaviorism was big in the US. One highly influential psychologist Burrhus Frederic Skinner held that since you could not (and should not) read the minds of people, you should only do research on displayed behavior.
He believed that all behavior was the result of reinforcement processes, stimuli and responses. Throughout your life your behavior was punished (negative reinforcement) or rewarded (positive reinforcement) by the environment, which led to specific behavioral patterns. The doctors used conditioning to encourage behavior they deemed good and productive.
Much of the theory was based on research on rats and pigeons. Behaviorism is an extreme example of how useful observations of some aspects of animal life, can be turned into a complete theory of life, love, art, and human values, killing our very humanity in the process.
Skinner followed the scientific methods of the day, and a majority of American psychiatrists and psychologist considered this kind of research as objective and sound as it could get. Based on that world view they went on to torturing their patients with various forms of aversion therapy, including the use of induced vomiting and electroshocks.
At the time nearly all of them were convinced that it could also be used to cure what they considered "sexual perversions", including homosexuality. For a while it seemed they were right. It turned out most of the "cured" gay patients were bisexual, however. Gay men were never "cured", as there was no disease to cure.
Crossdressers were asked to dress up and stand barefooted on a wire mat. A series of electric shocks were delivered to his/her feet, until the "patient" had removed all of the offensive clothing. Again, there therapy did not work, simply because the "transvestitism" was not the result of conditioning.
Anyone who believes that science always gives you the truth and nothing but the truth, should say 25 Ave Marias and go back to Start. There is no reason to believe that modern scientists are less caught up in their theories and prejudices than the scientists of the 1960s and 70s.
Penile plethysmography and biofeedback in the treatment of a transvestite-exhibitionist
Describes an innovative application of penile plethysmography and analog biofeedback procedures for the successful direct modification of chronic deviant sexual arousal.
The target of treatment was the compulsive transvestite-exhibitionistic sexual behavior of a 45-yr-old married male. Preliminary clinical interviews and laboratory assessment (baseline) sessions were followed by 12 treatment sessions while the patient was hospitalized in a psychiatric inpatient facility.
Sexual arousal was monitored during treatment by a mercury-in-rubber strain gauge. The patient's response to a videotape of the target behavior (transvestite-exhibitionist videotape) was gradually eliminated through the use of analog biofeedback procedures.
The posttreatment and 4 follow-up laboratory assessments provided direct evidence of lasting treatment effects. Assessment of appropriate heterosexual arousal revealed a consistent specific treatment effect not attributable to habituation or generalized suppression of sexual arousal.
After 2 yrs of apparently successful follow-up, the client's wife disclosed that he had resumed cross-dressing and exposure and had deliberately deceived the therapists during the greater part of the follow-up period. This is a dramatic example of the unreliability of self-report as a treatment-outcome measure.
Raymond C. Rosena and Steven A. Kopela
Rutgers Medical School, Coll of Medicine & Dentistry of New Jersey, Piscataway
Journal of Consulting and Clinical Psychology
Volume 45, Issue 5, October 1977, Pages 908-916
The experiment was a total failure. There is no reason to believe that crossdressing can be cured with aversion therapy.
And here is one from 1970:
Case conference: A transvestite fantasy treated by thought-stopping, covert sensitization and aversive shock
Abstract: The subject of this case conference is a 22-year-old college senior with a transvestite fantasy whose origin dated back to preschool days. It was successfully treated in six sessions using the behavioral techniques of thought-stopping, covert sensitization and aversive shock. Questions concerning goals, procedures, timing of approaches, and practical issues are discussed.
Louis GershmanVillanova University and Eastern Pennsylvania Psychiatric Institute, USAReceived 21 January 1970.
Journal of Behavior Therapy and Experimental Psychiatry
Volume 1, Issue 2, June 1970, Pages 153-161
Another one from 1973 shows us how they regarded homosexuals.
Aversion therapy for sexual deviation: Contingent shock and covert sensitization
Studied 2 different aversion therapy approaches to the treatment of sexual deviation (e.g., homosexuality) in 6 clinical referrals.
Covert sensitization, which provides an imagined aversive event following imagined sexual behavior, was compared with contingent shock, which provides a physical aversive event following erection to slides depicting sexually deviant material. Replicated, counterbalanced within-S presentations of each technique were used.
Treatment effects were monitored by measurement of penile circumference changes during slides presented prior to treatment sessions, and by daily subjective recording of sexual urges and fantasies as well as masturbation and sexual acts. No clear difference was found between the treatments on the penile circumference measure.
On suppression of subjective measures of sexual arousal, however, covert sensitization appeared to be more effective than contingent shock. Follow-up of 4-18 mo. is reported for the individual cases. (37 ref.)
Edward J. Callahana and Harold LeitenbergaaCarmarillo State Hosp., Calif
Journal of Abnormal Psychology
Volume 81, Issue 1, February 1973, Pages 60-73
So who were the real perverts here: the crossdressers and the homosexuals or the doctors treating them?
Source: Science Direct
The image is from the movie A Clockwork Orange, which came out in 1971.
Posted by Jack Molay