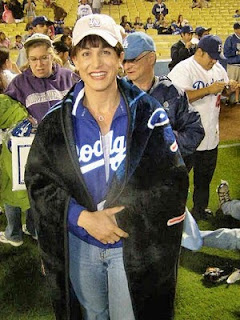 Alice AKA Richard Novic is a refreshingly outspoken crossdresser, crossdreamer and psychiatrist who does not beat around the bush when it comes to discussing feminization fantasies. Nor does she hide the fact that she lives out her dreams in real life.

Some of you might have read her book, Alice in Genderland: A Crossdresser Comes of Age

, or visited her site. Others will remember my post on her two type model of transgendered male to females: love-to-be-femme and act-femme.

If you have, you will know that she has taken the autogynephilia theory and given it her own unique twist.

Here's the first part of my interview with Alice.

On writing the book

Jack: I must admit I found your autobiography Alice in Genderland quite a revelation. Unlike many transgender men and women writing about their lives, you do not try to hide the sexual part of the motivation for what you do, in your case crossdressing.

I believe it is extremely important for male to female crossdreamers -- who you call "love to be femme transwomen" -- to see that there are others out there that share their dreams. Writing and publishing that book must have taken a lot of courage. What made you do it?

Alice: I guess two things really, Jack, the first is that I wasn’t satisfied with being just an average Jewish-American with a good career and a couple of kids. I had always stood out when I was young, so as an adult, I was looking out for something extra I might do.

When an opportunity to do neuro-imaging research at UCLA fell through in 2000, I looked to my transgenderism for inspiration. I was stunned by the fact that nobody had ever written the memoir of a crossdresser and that transsexual memoirists were just beginning to get real.

I thought we crossdressers could really use an honest, proud, and well-credentialed voice--I am, after all, a psychiatrist. I saw CD [crossdresser] after CD and many transsexuals wrack themselves with same kinds of confusion and self-doubt. I knew I could help them, and with a message that was much grittier and more thrilling than the standard stories we CDs and TSs use to comfort ourselves and our families. Alice in Genderland felt like a mission for me, and the courage for it came from a potent combination of compassion and ambition.

The two types of transwomen

Could you say a little about how you ended up with this model, and to what extent it differs from the one of Blanchard's?

Alice: Sure. Quite simply I read Blanchard—and [J. Michael] Bailey, especially his The Man Who Would Be Queen

. I was blown away by what they had learned about MTF transpeople; it totally explained all the disparate things I had seen and heard over the years.

Our landscape is not divided north-south between crossdressers and transsexuals; it’s split east-west between those who start out straight and those who start out gay. What a brilliant idea! I was kicking myself for not having seen it myself, but as a transperson I was still too attached to our own propaganda to realize anything that ran counter to it.

Maybe Blanchard and Bailey as non-trans people were free of such blinders? Not bloody likely if you’d ask me. I don’t think I’ve known of anybody who has an abiding interest in trans folk who isn’t one themselves deep down. So kudos to them for somehow being secure enough to see past their own blinders.

I felt like I was a physicist who had the chance to discover the Law of Gravity and missed it. But when I saw how Blanchard, Bailey, and TG physician Anne Lawrence were as harassed for their insight as Galileo was, I figured that missing out on the most radical and accurate theory of our time might have been agood thing. Nonetheless, I was happy to learn what I could from their work and thereby write a memoir that’s less self-serving and much better equipped to stand the test of time.

By the way, my love-to-be-femme versus act-femme model doesn’t differ at all from Bailey’s model, nor do I believe from your crossdreamers model. Only our terms are different, and I’ve even updated mine in my undying quest to be brief, descriptive, and hopefully not too offensive.

For the last few years I’ve preferred to speak of started-out-straight transwomenand started-out-gay transwomen. Starting out straight or gay is determined by who you longed for in adolescense. I prefer terms like yours or mine, Jack, because Michael Bailey’s terms make us sound perverted and could easily be used against us TGs.

Jack: I must admit that the hardest part of making sense out of crossdreaming and crossdressing, is that it seems to be caused by a very complex system of biological, psychological, social and cultural factors.What do you think? Are we born like this or do we become like this?

Alice: We crossdreamers, crossdressers, and started-out straight transsexuals have a certain mix of male tendencies and female desires. To me as a psychiatrist, that’s not so different from intersex people—or gay people for that matter. We know that most intersex conditions have developmental rather than hereditary, early childhood, or other environmental causes. So why should we be so different from them just because their gender differences are immediate and anatomical and ours are emergent and behavioral?

Because our transgender differences don’t show up until later, could family and social pressure be important causes? Possibly, but nearly all the families and cultures I know give kids a push in just the opposite direction, i.e. to behave more in line with the sex they were born into. In my opinion, family and social pressure don’t cause anything; they’re high walls that should fill us with awe for any human drives able to breach them.

Jack: Blanchard argues that autogynephiliac's [M2F crossdreamers] are heterosexual (gynephilic) while what he calls homosexual transsexuals are attracted to men. As he is grouping all other sexual variants together with the autogynephiliacs, I guess there isn't much room for bisexuals in his model.

Alice: I believe you’re right about that, and I, though, very active sexually with both my wife and boyfriend must agree. Both in the confessions I hear at work and in my readings of the research, there just doesn’t seem to be nearly as much male bisexuality as Kinsey led us to believe, nor perhaps any true male bisexuality at all.

Men seem to come in the standard straight package or the standard gay package. There just doesn’t seem to be a continuum of fellows in the middle who aren’t just bi-capable but who really love men and women absolutely equally. For whatever reason, a small but significant number of women occupy this middle ground, and on the whole women experience more fluidity in their preferences over time.

Many of us bisexual started-out straight MTF types like myself would seem to be a big exception to this rule, and perhaps we are, though I’m inclined to agree with the view Blanchard would probably have of me. He’d see me as a transgender version of a straight man and see my sexual interest in men as fetishistic, i.e. that I use men as the ultimate prop in my autogynephilic imagine-I’m-a-girl fantasy. Ouch!

At first I was offended by such a notion, but, disturbing or not, in the end it just seemed true. I guess that’s a little sad, but again I can assure you as a medically sanctioned confessor of a thousand souls, whether TG or mainstream we all use each other in relationships and that’s . . . A-OK, as long as it’s mutual and well understood. It’s just called making a life with others in areal non-greeting-card or stump-speech way.

Jack: Still, there you are, biological male married to a woman, openly having a male lover on the side. Many crossdreamers or love to be femmes report that they are 100% into women. Still, in their fantasies they are having sex with men. What is your take on this?

Alice: I think sexual fantasies, especially recurrent ones, are meaningful. In my personal and professional experience, your fantasies represent the desires you’d pursue if you could design your own circumstances. Now, these circumstances might be bizarre and these desires deeply troubling, but they give an accurate read of your innards, nonetheless.

As a rugby playing Freshman at Harvard, for instance, I used to be plagued by the thought of being thrown into prison, forced into a dress, and having to submit sexually to another man. Of course, at the time that didn’t mean to me that I was in anyway bisexual . . . because I was entirely unprepared for the potentially devastating effects that could have on how I viewed myself and my future. Seriously, I might have committed suicide if I’d had to face the fact that I deeply and truly wanted to go to bed with man and get fucked like a woman.

I think the “I just fantasize about it but don’t really want it” crowd are in denial the way I was back then. Why own up to a desire that might break your wife’s heart and rip your family apart if you ever dare to satisfy it? Why? Really, why? So, I’m totally sympathetic with these people even though I don’t buy what they’re saying.

And most will never have to face the truth, not unless Mr. Opportunity comes knocking. And I hate to break it to you folks, but he doesn’t often come knocking, not with teeth and a job and reassuring things like that. Just because you’re out drunk and sloppy and ready to fall from grace, don’t expect sizzling things to happen to you. It takes a lot of work. You have to put yourself in the right place at the right time, have your act together as a woman, and hopefully be young and slender enough for anyone male to care.

Alas, most of you classic crossdressers in your forties aren’t gonna be confronted with the chance to act out your most toe-curling fantasies, and I’m sorry. But at least your illusion of being purely oriented to women won’t be put to the kind of terrifying test mine ultimately was. And the sexual offers you’re likely to see will come from other crossdressers . . .and they might not be so tempting . . . and you might not choose to count them as men.