What is feminine and masculine anyway?

On this blog I have been using words like masculine and feminine quite liberally. After all, that should make sense, given that crossdreaming is a transgender phenomenon, and boys who dreams about being girls should have a pretty good idea about what that entails.

I have gradually come to the conclusion, however, that I have no longer a clue about to what these two words really mean.

Dictionaries are of no help, as they have a tendency of defining 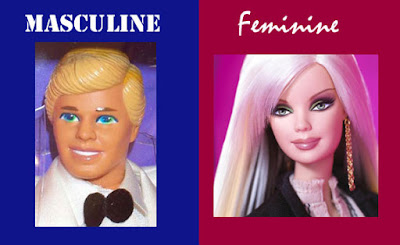 a term like "feminine" as "associated with women and not with men", or -- if they are very advanced -- giving it a culturally relativistic definition: "Femininity (also called womanliness) refers to qualities and behaviors judged by a particular culture to be ideally associated with or especially appropriate to women and girls."

There are several reasons for my problem.

One is the fact that I have grown up in Scandinavia.

I have seen the "qualities and behaviours" of women change before my own eyes. Women not only have the right to vote, they practically run the place. Four out of six Norwegian party leaders are now women. The Conservative Party and the right wing Progressives are both run by what was once the "weaker sex". When Mrs. Gro Harlem Brundland ran the place, we had worried young boys asking their mothers if it was possible for men to become Prime Minister.

Women were traditionally supposed to be non-intellectual, emotional, passive and caring and completely unsuited for leadership. Men, on the other hand, had apparently no aptitude for child care.

It is strange to see how Norwegians now consider the willingness to take care of your kids to be as much a masculine trait as a feminine one. Fathers are expected to spend time at home with their new born child during the first year of its life. When I grew you rarely saw a man push a stroller.

The flexibility of language

Still, this is not only about changing gender roles. This is also a question of perception and language. 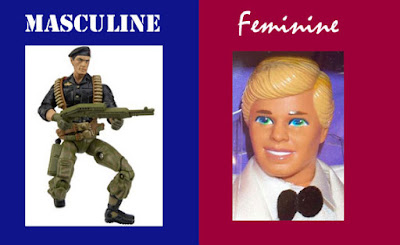 When I grew up, the traditional core family continued to be the norm. Middle class women stayed at home in a Mad Men kind of way.

That being said, people were pretty flexible when it came to determining to what extent one could call a man a man.

I remember my uncle Thomas and aunt Ragna very well. Thomas was a very small man with a weak disposition. He never talked loudly (if he talked at all) and was very nervous among -- well -- anyone. He was a businessman, although not a very successful one, as he lacked the kind of aggressiveness and stamina required to succeed.

He might have been the boss back home, but every body knew, to quote Woody Allen, that mom made all the decisions. Ragna was a formidable woman, a big and strong primary school teacher who faced no disciplinary problems what so ever. She had a strong willed personality and a lot of opinions about anything. She was the aggressive boss. He was the submissive partner.

But they clearly loved each other, an no one doubted the fact that she was a 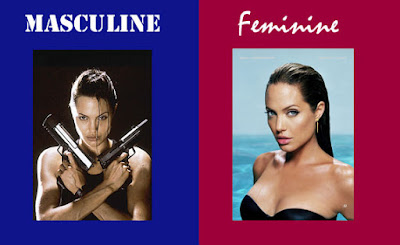 woman and he was a man. No one would call her masculine or him feminine. And I believe the reason for this was they had four kids. They were as heterosexual as you get.

I am sure may uncle and aunt both faced problems when growing up. He was probably teased for his "effeminacy", while she was reprimanded for sticking her neck out. But in the end they were both accepted.

The eternal bachelor had it much harder. He was considered feminine even when he was not.

Here's my point: If you had asked them about what feminine and masculine meant I am pretty sure they would have repeated the stereotypes of the day: "Women are emotional and caring, men are aggressive and dominant." And they would do so even if they themselves behaved differently.

My mother definitely believed that women had a natural capacity for infinite love, but the fact is that the only person that had this quality in our house was my father. He was the caring introvert. She was the aggressive power player. 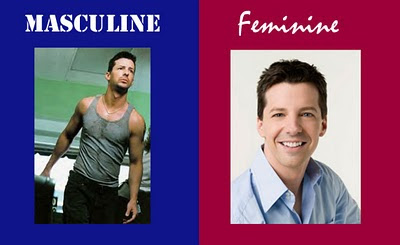 Hence there seems to be no connection between what people believe they believe and how they actually act.

This also applies to history. We are repeatedly told "in the old days" women were expected to keep quiet and let men rule the world.

Moreover, women were apparently non-aggressive and loving in an asexual kind of way. They were supposed to be more focused on putting on that "absolutely gorgeous" wedding dress than on what would happen when they finally took it off.

Anyone who has read Shakespeare knows that this is a myth created much later, in Victorian England. We know now from studies made of Victorian women that they did not close their eyes and think of England. And Queen Victoria herself was, of course, in no way as meek and mindless as women of her time were supposed to be.

Again the idea of femininity and masculinity collides with reality.

In the debate on the nature of transsexualism there is a lot of talk about looks and manners. In fact, some transwomen beat each other up in the most viscous (and unfeminine) way when it comes to not not being able to pass as feminine women.

I find this rather bewildering, as I cannot understand how they can expect a person who has grown up in a male body to suddenly look like Audrey Hepburn. I mean, if you are lucky and have a small body with a non-dominant 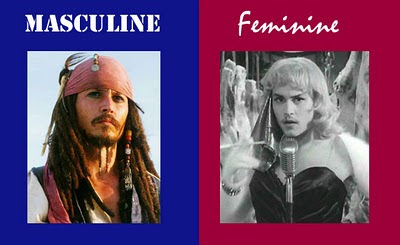 bone structure, I guess it is easier to get away with it, but in no way says that anything about your gender identity.

Again reality hits me in the face.

Do all women look feminine? No, they do not. They come in all shapes and sizes.

I have seen big Bulgarian women with mustaches and the muscles and the manners of body builders. They are still women.

Closer to home I have a lot of women friends who wear the latest fashion, spend hours at the hair dresser, but still behave in ways that were considered masculine only a few decades ago. They are ambitious, aggressive, strong willed, and -- yes -- promiscuous. They are still considered "feminine".

And the current obsession with botox and face lifts tells me that this is not so much about being a woman as it is about being young. An older man appears more masculine than a younger one. An older woman may not look feminine at all. That does not make her less of a woman.

Would Mrs. Doubtfire pass as a woman? My grandmother looked like that. But that Robin Williams dude...I don't know... he looks feminine to me!

The stereotypes of science

Given all this confusion, we should probably go to objective science for clarification. Unfortunately, the scientists are as hung up in stereotypes as the rest of us.

Professor Rebecca Jordan-Young has written a very fascinating book on the gender understanding of brain scientists looking for an explanation for sex differences in prenatal hormones. The book is called Brain Storm: The Flaws in the Science of Sex Differences

. I recommend strongly it to anyone who is interested in the question of sex research. 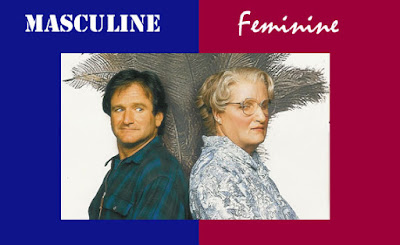 Jordan-Young notes that biologists seldom bother to question their own ideas about what feminine and masculine mean. When asked they say it is obvious. "Everybody knows!"

Which is exactly what my mother told me as well. But then again, she was not a scientist.

She definitely believes that biology is part of the explanation for gender identity development, but the current obsession with testosterone leads nowhere, according to her.

She finds that the understanding of masculinity and femininity among these researchers changes in accordance with the changes in the culture around them. This means, for instance, that research conducted before the 1980's is based on a different understanding of sexual traits than the research done more recently.

I have made the following illustration on the basis of figures found in the book. The first one sums up ideas about gender specific sexual traits reflected in relevant research publications published from 1967 to 1980.

At that time the scientists seemed to share a large number of ideas of expected sex behavior, and they all fit well with the stereotypes of the aggressive, virile, promiscuous man and the passive, romantic and sentimental woman. (Click to enlarge!)

When we reach the 1980's, however, I guess there were enough ambitious, dominant and sexually aggressive women on campus to make it impossible for the scientists to determine the "natural" sex development of -- let's say -- intersexual people on the basis of such a list. The fact that an interesex woman masturbates no longer means that she is "masculine".

What happens now is that many of the traits that were originally considered exclusively masculine or feminine have found their way to the center column. They are traits shared by men and women alike. The only sex specific traits the researchers now seem to agree on is that a sexual orientation towards men is to be considered feminine and an attraction to women is masculine.

This is, of course, pure nonsense, given the existence of both gay men and lesbians. I guess some of the scientists cling to the understanding that gay men are feminine and lesbians are masculine. In real life, however, there is as much variation among homosexual people as there is among heterosexuals, which leaves us with no fixed point on which to decide on what is masculine and what is feminine.

Which brings me back to my confusion.

As I have noted before, I am not a social constructivist. I do not believe that crossdreamers deliberately choose to become crossdressers. I am convinced there is a biological basis for the gender identity of transwomen and transmen. You do not choose this kind of suffering voluntarily.

Moreover, if gender identity is shaped by society alone, there would be no transgender people. Because close to no one encourages such identity building among kids.

There can be no doubt, however, that most of the psychological traits we associate with masculinity and femininity are cultural, not biological. And to the extent there are statistically significant differences between the two sexes, these differences are marginal and make only sense on an aggregate level.

Men can have a  parental instinct that is as strong as the maternal one found among women, and women can be as good at running companies and countries as men.

Then what does it mean when a transgender person says that he or she identifies with the other sex? I'll come back to that in later posts.