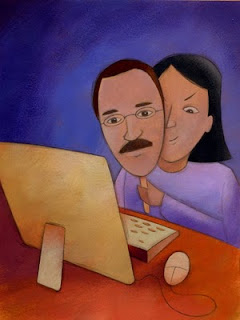 A crossdreamer risks ruining his relationship by adding a female mask to their love life.
The American popular science magazine Psychology Today is covering crossdreaming/autogynephilia (men fantasizing about being women) in its blog.
It is written by Alice Dreger. She is not officially a Ray Blanchard disciple herself, but she has voiced strong concern about the way Blanchard follower Michael Bailey was treated by the transgender community.
I am not going to repeat my objections to Blanchard's explanation of the crossdreamer phenomenon here. You are probably bored already. Just remember that the fact that Blanchard's description of crossdreamers often hit the mark, does not mean that his explanation for this condition is the right one.
Dreger responds to an entry in Dan Savage's blog Savage Love. The question asked by one of Savage's female readers is the following:
"My boyfriend of four years enjoys wearing women's clothing and acting like a submissive woman when we have sex. Nothing gets him off more. We have only just started exploring his fetish in the past year because he has been ashamed of it all his life. I have encouraged him so far and now we have a couple hundred dollars' worth of sexy women's clothing that fits him. Last night he asked me if he could wear a latex mask of a woman's face during sex. That crossed the line for me. I hate when he puts on skirts and high heels and asks me to fuck him. It's a huge turn-off. I have not enjoyed sex with him for months. I want him to be sexually satisfied, but his fetish disgusts me. I'm a straight woman and I want to have sex with a man who is acting like a man. What do I do? Femme Teasing Mask"
Savage repeats the common misunderstanding that crossdreaming is a fetish. He writes:
"... You've created a monster, kiddo, and you need to take some responsibility for the mess you've made. It's one thing to encourage your partner to explore a fetish that you're willing to play along with or, if you're lucky, you enjoy on some level. But encouraging your partner to explore a fetish that disgusts you? That's as good as signing your relationship's death warrant!"
Savage's most perverse kind of advice is for her to leave with a lie:
"So don't tell him the real reason why you're leaving--let him think that it's not the crossdressing and the latex masks, but his breath or his fashion sense or his family or whatever. Leave him, FTM, just leave him with his newfound sense of pleasure in his fetish, okay?"
Alice Dreger points out the boyfriend's interests may be more like a sexual orientation.
"What's the difference? In sex research and in clinical psychology, 'fetish' usually refers to an object (like a particular article of clothing) or substance (like latex) that an individual finds particularly sexually arousing. By contrast, a sexual orientation is more about how we are wired to interact (or not) sexually with others."

Interviewee Ray Blanchard agrees with her here. One of the reasons he came up with the autogynephilia concept (love of oneself as a woman) in the first place was the fact that "autogynephilic" men do not have to be crossdressers. He says to Dreger:
"By the end of the 1980's, I was becoming increasingly convinced that, at least for some men, the idea of being a woman was central to their erotic excitement, and that the specific objects they used to symbolize their femininity were secondary and interchangeable."
The use of the mask leads Blanchard to argue that there is nothing in the concept
of autogynephilia to require that a man be sexually aroused at the idea of himself as a real woman:
"I once co-authored a case report on a man who was sexually aroused at the idea of being a kind of cartoon dog. So there is nothing to stop a man from being sexually aroused at the idea of being a kind of cartoon woman. "
Hmm, that is the kind of parallell that brings us back to the fetish, I am afraid, and one which undermines Blanchard's own theory of autogynephilia being some kind of male heterosexual attraction to an internalized woman. If attraction to an internalized cartoon dog (autoscoobydoophilia) is a parallell to autogynephilia, the idea that this is some kind of misdirected love of women breaks down.
In this case, the simplest and most elegant explanation is that the mask is just another form for crossdressing, and that the crossdressing is an expression of some kind of inner "womaness" that needs to find an outlet.
The fact that some men are turned on by wearing depersonalized masks requires an additional psychological explanation. That's the complexity of life, I'm afraid. People who are turned on by cartoon dogs belongs to a different category, all together.
Indeed, Blanchard soon backtracks from the cartoon trap:
"Of course, most autogynephilic men are erotically aroused at the idea of being a flesh-and-blood woman, not a stylized woman. Some will become transsexual, undergoing expensive full facial reconstruction surgery to make their faces look as realistically feminine as possible."
Note that Dreger also links to the sister blog of this one: The Autogynephilia Portal, arguing that it contains "compelling first-person accounts of autogynephilia." That's your stories, folks!
So what should are masked friend have done to avoid pissing off his girl friend? Now, that is a tricky question. Basically this is a story with some positive spin. He is together with a modern, tolerant, woman who loves him and tries to play along with his needs. She is living proof that it is possible to live out a crossdreamer sexuality together with a heterosexual woman. But she has also needs, desires and limits that need to be respected.
I would guess that he was so relieved to meet this kind of understanding that he thought she would also play along on the next level. She would not. Now, that is fair. What grown ups do under such circumstances is to agree on the limits. She says no. He should respect that, and enjoy the fact that she plays along with his other crossdreaming fantasies.
This is why Savage's advice is so destructive. If she does not tell her boyfriend about her objections he has no way of accommodating her needs.
Fortunately, Savage has a crossdresser friend that sets things straight. Savage adds:
"But if you want to stay with this boyfriend and try to make it work, FTM, tell your boyfriend how you really feel. Then hand him this column, because Kerry's got some advice for him: 'To him, the boyfriend, I would say that he shouldn't make his girlfriend participate in sexual activities she has no interest in,' Kerry said. 'I would tell him to dress up and mask on the side and when it's time for sex, USE YOUR IMAGINATION. My wife knew about my crossdressing and female masking before we got married. I love to mask and go out to nightclubs, Halloween events, and science-fiction conventions. It really turns me on. But it doesn't do anything for my wife who I'm sure would be in much the same boat as the woman who wrote you if I insisted on doing sex in high drag. So I don't. Like I said, I let my imagination do the work for me, and my wife gets 'a man acting like a man' in bed. Everybody is happy."
I am afraid many crossdreamers find living in their imagination less than fulfilling. Still, taking turns playing the traditional roles of man and woman should be enough to make everybody happy. And you should be allowed to ask.
Read the Alice Dreger blog post here.
Posted by Jack Molay