The Finns remove crossdressing from their medical manual 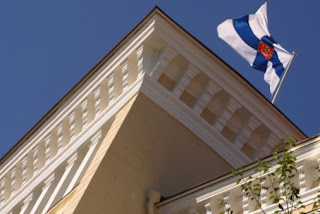 As my regular readers will have noted, I have been seriously annoyed by the inclusion of crossdressing and crossdreaming in the American Diagnostic and Statistical Manual of Mental Disorders (DSM-5).

As far as I can see, crossdressing and crossdreaming are not mental disorders per se, but the psyche's way of coping with some kind of gender misalignment. In other words: transgender conditions like these are expressions of natural diversity, not perversions or "paraphilias".


"Certain diagnoses relating to sexual behaviour will be removed from the Finnish version of the International Statistical Classification of Diseases and Related Health Problems (ICD) next year. The number of categories to be removed from the ICD is five, including transvestism, sexual fetishism, sadomasochism, and diverse sexual target disorders."
The newspaper notes that  harm has been inflicted on people who have felt that they have been labelled by such diagnoses.


"The major problem is that when examining himself or herself, a transvestite may have noticed that he or she has a mental disorder, thereafter starting to regard himself or herself ill", Minna-Maaria Lax, the chair of a Finnish crossdresser association says.
The paper points out that in conflict situations, for example during a divorce, the classification may have given a weapon to the other party.
The Swedes changed the manual in 2009
The ICD codes F64.1 (Dual-role transvestism), F64.2 (Gender identity disorder of childhood), F65.0 (Fetishism), F65.1 (Fetishistic transvestism), F65.5 (Sadomasochism), F65.6 (Multiple disorders of sexual preference) have not been used in Sweden since January 1 2009.

As far as I can see, Danish health authorities stopped treating crossdressing as a disease as early as 1995. (Reierstøl/Skeid 2006) The Norwegians removed it in early 2010.
Scandinavian psychiatry on transvestites
In a paper of 2006 the Norwegian psychiatrists Odd Reierstøl and Svein Skeid argue that the ICD Diagnoses of Fetishism and Sadomasochism should be taken out of the manual. They argue that the fact that something is uncommon does not make it a disease:
"Behavior should not be diagnosed just because it is unusual. It is not unreasonable to assume that stamp collectors have an unusual interest, in the statistical sense. Few would argue the unusual inclination to philately should be considered a diagnosis. If this hobby is practiced in an extreme way and causes distress, an individual might be diagnosed with something, but it would not be seen as originating in philately.
"Our main point here is that sexuality should not be pathologized just because it is unusual just as other unusual characteristics or interests are free of psychiatric scrutiny. The diagnoses of fetishism or sadomasochism also should not apply just because a person feels distressed about his or her own interest in that kind of behavior. When sexual behavior is safe and consensual, there is nothing wrong with it from a clinical point of view."
Making crossdressing a disease is an expression of cultural attitudes, not a scientific fact
They also point to the exclusion of homosexuality as an example of the socio-cultural context of some psychiatric diagnoses:
"The impact of social norms on diagnostic considerations is illustrated in the case of homosexuality. Homosexuality was withdrawn from the disorders of sexual preference (DSP) category in the ICD-10 (it was still listed in ICD-9). The removal of homosexuality from the DSP can be mainly attributed to homosexual individuals who were organized and applied political pressure on the psychiatric profession. They argued that there was no scientific basis for the inclusion of homosexuality as a mental disorder.
"Although ICD revisions should not be based on popular opinion, it is important to recognize that many psychiatric diagnoses reflect, to some extent, social norms. Thus, diagnosing Fetishism and Sadomasochism is no longer in line with the norms of diverse multicultural societies that value acceptance and tolerance."
Human rights
The huge difference between their approach to this kind of sexuality and the one of Americans like Ray Blanchard is very interesting. For these Scandinavians labeling crossdressers as perverts becomes a human rights issue:
"Diagnosing individuals based on types of sexuality is as unjust as discriminating against people based on race, ethnicity, or religion. It is as absurd as diagnosing people for being 'blue-eyed' or 'old.' Individuals should not be diagnosed for who they are, for the tastes they have, for their beliefs or interests, nor for the kinds of sexuality they prefer."
As our Finnish friend quoted in Helsingi Saomat, Reiestøl and Skeid argue that a diagnosis of this kind can actually cause a mental illness. Individuals may believe they are ill because medical authorities said so; a diagnosis can often become a self-fulfilling prophecy.
Don't we know it!
Litterature
Reiersøl, Odd and Skeid, Svein (2006) 'The ICD Diagnoses of Fetishism and Sadomasochism', Journal of Homosexuality, 50: 2, 243 — 262
Posted by Jack Molay