Another TG blog: To Get to the Bottom of Everything

Here is a crossdreamer blog I have missed: To Get to the Bottom of Everything written by Russel AKA Rebecca Reichert. 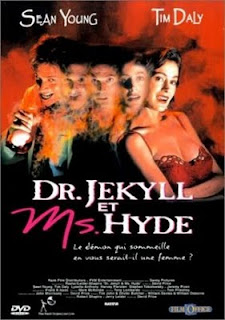 She tells the story of how she became aware of her transgender condition:

"I can't say how old I was, but I might have been around 10 years old. My family had gone to one of the local Blockbusters in the area for whatever reason and I remember that I was wandering around by myself. The one thing from that trip that sticks out in my memory was when I came across a certain movie. The movie, which I now realize was Dr. Jeckyl and Ms. Hyde, had a man turning into a woman on the cover. I believe that I was able to remember the gist of the title all these years, but I cannot honestly remember if that was added later on or not. But anyways, this movie stuck out to me before I had any idea what my interests in sexuality, being and other stuff were."

You will find that a lot of crossdreamers find a way of conceptualizing their transgender nature through popular culture. Younger generations are -- for instance -- inspired by the Japanese manga series Ranma 1/2, about a boy who due to some magic often changes into a girl.

In this there is no difference between crossdressers and crossdreamers who live as men on the one hand and transwomen and transmen on the other, as the conditions most likely are related. The dreams of magic potions, genies, lamps and spells give the crossdreamer a way to explore his/her inner woman or man in his/her mind.


These dreams can also become sexualized (which is why the term "autogynephilia" came up in the first place, meaning "love of oneself as a woman"). Indeed many transwomen admit that they have had such dreams, but that they disappear after transitioning. My guess is that as they can explore their sexuality as a woman in real life, the crossdreams lose their emotional energy.