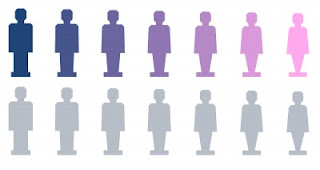 Those who have followed the transsexual/transgender debate (or "war", rather), will have seen that a major argument made by so called "classic transsexuals" against the umbrella term "transgender" is that it mixes up real transsexuals with crossdressers, crossdreamers and the genderqueer.

Because of this, they are trying to change the meaning of "transgender". They use it as a term for every type of transgender condition they do not like, and would like to keep the term "transsexual" for the real women.

Transsexual is not the same as transgender

I have no problem with limiting the use of the word transsexual those that have undergone surgery, who plan to do so or who want to transition. But the attempts at splitting at turning the umbrella term "transgender" into a label for everything perverted, makes me angry.

That does not stop them from having a lot in common with transsexuals, though. They all are, like the transsexual men and women, suppressed by people who feel threatened by those who do not adhere to the gender stereotypes of the day.

And whatever the classic transsexuals say or believe: The real bigots out there do not accept any male bodied person who feel like a woman.

What is even more important, though, is that there a quite a few crossdreamers and crossdressers who actually suffer from severe gender dysphoria. Some of them again are actually transwomen.

If you ban every transwoman or transman who has ever crossdressed or crossdreamed from the transsexual family, there won't be that many left.

It now turns out that the term "transgender" does not undermine the status of transwomen and transmen in the eyes of the American public.

It, is in fact, the non-transsexual transgender who are under threat, including many of the readers of this blog.

A study made by the Public Religion Research Institute seems to indicate that overwhelming majorities of Americans agree that transgender people should have the same general rights and legal protections as others.

Here is what they say:
Given the toxic atmosphere of current American politics, these are mind blowing numbers, indeed.

Transgender is understood to mean transsexual

The Institute thinks so, enthusiastically telling the world that approximately two-thirds of Americans both report being well informed about transgender people and issues, and generally understand what the term “transgender” means.

It turns out the neither the respondents, nor the researchers, understand what the word means.

Take a look at this:

What this means is that the great majority of Americans interpret "transgender" to mean "transsexual".  None of the four definitions listed above are in line with the current definitions of the word "transgender"

I see the following meanings of the word in the litterature and in the online debate:
It seems to me that 9 percent of Americans interpret the word "transgender" to mean "genderqueer", 5 percent allows for some other type of ambiguity, while the rest believes it is a synonym for transsexual.

That does not surprise me, and I am not blaming them, but it does represent a problem.

The gender regime is powerful

I guess that within a culture that even now adheres strictly to traditional gender roles, the only type of transgender that makes sense is the one where a person switches completely from one role to the other. That kind of change is not a threat to the division of roles society is built on.

This also means that Americans find transsexuals less of threat to the social and moral order than homosexuals, who actually do break with the "heterosexist hegemony".

The fate of those that live in both worlds, or who -- for some reason  -- cannot or will not make the switch is unfathomable. They do not fit into the paradigm. Heck, they cannot even be understood as "proper" homosexuals.

This explains why the classic transsexuals make so much fuzz about the not being put in the same box as crossdreamers and crossdressers.

Male to female crossdressers and crossdreamers are understood as men who violate the "proper" gender configuration. They live as men, but still claim to have some kind of femininity. This does not fit with the stereotype universe of the classic transsexuals, where men are men and women are women. Any association with crossdressers and crossdreamers must therefore undermine their legitimacy as women, they believe.

As the study shows, it does not.

If they really wanted to exclude the crossdreamers and crossdressers from "decent society", they should have held on to the word "transgender", and then forced the queers and the perverts out of that family. By giving up the word "transgender" they have actually lost a great opportunity to use the traditionalism of America to beat the crap out of us "paraphiliacs".

But it is also clear that the transgender movement (if there is such a thing) has lost, as neither activists nor experts have managed to explain the paradigm shattering part of the transgender narrative to the American public. For the majority  crossdressers and  genderqueer are not even on the radar.