Crossdreamers in the Movies: The Bugs Bunny Story

This is not a prank. The American cartoon character has actually been a positive role model for crossdreamers, queer and transgender people.
In the very interesting Netflix documentary Disclosure, on transgender presentation in American movies and TV, the transgender movie director Lilly Wachowski (of Matrix fame) tells the story about how the Bugs Bunny movie What's Opera Doc? helped her in her transgender journey.
The actor Laverne Cox agrees: "It was just fabulous".
As the documentary explains, most Hollywood representations of crossdressers and transgender people have been  transphobic at the core. The positive view of Bugs Bunny may therefore come as a surprise.

Given that the US Postal Service is now celebrating Bugs Bunny's 80 year anniversary with a series of stamps, two of them depicting him as a crossdreamer, I decided to write  more about this over at my Trans Express blog in the article "Bugs Bunny as a Positive Transgender and Queer Role model".

Here I would like to look into how important media coverage is for young trans and queer kids who are trying to find out who they are. They do not read science papers or follow LGBTQA media. They watch cartoons, play games and read comic books, and if they cannot find anything there (or have good friends who can help them), they will have no language to help them.
The young MTF crossdreamers Lilly Waschowski and Laverne Cox watched the cartoon below and saw a male assigned person dress up as a woman with great confidence and with no shame, embodying femininity with impressive bravado and in a positive way.
Sure, today we will probably comment on all the gender stereotypes, but the fact is that Bugs Bunny embodies a proud and beautiful crossdreamer (or crossdresser or drag queen or trans woman) in a way that is affirmative and helpful.

In What’s Opera, Doc? (1957) director Chuck Jones and his team combined Wagner’s “Ring Cycle” with s parts of “The Flying Dutchman,” Tannhauser and Rienzi in a seven-minute cartoon, in itself a magical performance, if you ask me. On top of this they turned gender variance  into something positive.
In 1994, 1000 members of the animation industry ranked What's Opera, Doc? No. 1 in a list of the 50 greatest cartoons of all time. 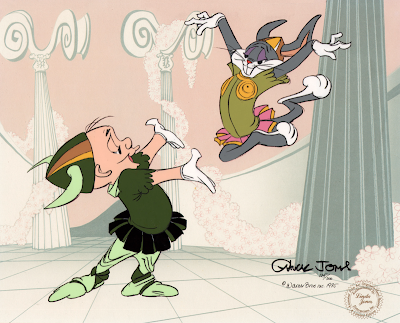 Is Bugs Bunny trans? That is not the point.

My point here is not that Bugs Bunny is transgender. Bugs Bunny, the character, is playing a role in an opera here, that much is clear. Indeed, the cartoon reminds me of the old tradition where men played all the roles on the stage. Mythologically Bugs Bunny is a trickster, and as trickster gods like Loki, he has the ability to cross gender boundaries.
My point is that this trickster god, like trickster gods and shamans before him, provides crossdreamers and trans people with a schema or a map that makes gender variance visible and possible.
I grew up in Norway at a time when there was only one single state owned TV channel, and that channel showed American cartoons only one time a year, at Christmas. I am not kidding! I never saw this cartoon as a kid, and there were no other presentations available (beyond the inevitable crossdressing comedian), and I am sure that delayed my coming to terms with who I was significantly.
These days we see an increasing number of positive transgender characters in TV shows addressing kids and teenagers, like – for instance – Dreamer in Supergirl.  If some Bugs Bunny cartoons could have such a big effect on trans people in the previous century, I am sure this new presentation will make a huge difference.

The Matrix as a transgender allegory

By the way: Lilly Wachowski  has now confirmed that the Matrix movie is a transgender allegory, as many of us have suspected. That must feels weird for all the transphobes who have used the red pill metaphor to legitimize their own bigotry.
Unfortunately the "corporate world was not ready" for an open transgender movie at the time, as Wachowski points out, which is also why people like me did not see it as such. But, I remember that the idea about living a fake life in a false world made a tremendous impression on me, so I know for a fact that the movie helped me on my own journey.
In other words: Art matters. Good art helps you understand yourself and the world around you.
See also:
Posted by Jack Molay