Trapped in a too narrow view of human sexuality 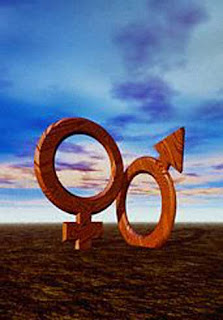 Although I see that there may be more than one type of transgendered, I find these terms very confusing, as his terms are based on the male identity of the male to female transgendered.

You can only call a male to female (M2F) transsexual that is attracted to men for "gay" if you believe that she (he?) really is a man. After all, if she truly is a woman she is a heterosexual.

Blanchard and Freund do offer an alternative terminology, that avoids this confusion:

I like this terminology, as it can be used for both women and men, transwomen and transmen, and still make sense.

Feminine androphile male to female transsexuals then are, according to Blanchard & Co, not victims of a "target location error". They are basically "healthy" homosexuals.

But they are not women, whatever they might feel.

They may ask for sex reassignment surgery, but they remain homosexual men also after the surgery.

This one of the major problems with Blanchard's theory. To him male to female transsexuals are either heterosexual or homosexual men, as their biological sex cannot change. They remain men regardless of how they feel or how much estrogen is running through their veins.

This is the kind of terminology that makes me really frustrated, not because it is hard to understand -- it is pretty simple really -- but because it so clearly masks the complexity of both sex (the biological part) and gender (the identity part) sides of being a man or a woman.

If this binary system of gay and straight is the starting point for your thinking, you will -- as a researcher -- be incapable to even see any of the many phenomena that might enrich or challenge your understanding of transgendered people. It is impossible, because the theory won't allow it.

This says a lot about science, really, because the traditional view of all science as being objective and evidence based clearly has no factual basis.

In many ways Blanchard & Co try to be objective and look at their findings in a disinterested way. I mean, you have to be pretty brave to forward politically incorrect opinions of this kind, and in one way I admire that kind of bravery. They are definitely not letting the feelings of transsexuals get in the way of their line of enquiry. I can actually accept that.

The problem is that their interpretation of their research based "facts" is restricted by a very narrow view of what it means to be human. So narrow in fact, that I am afraid they do much more harm than good.

I believe the physicist Thomas Kuhn once said that great scientific revolutions were only possible when the previous generation of scientists went to their grave. The reason for this, he argued, was that very few scientist were unable to think outside their own box, belief system or "paradigm" as Kuhn called it.

For that to happen, there had to be a challenge so great that the scientists were unable to find satisfactory solutions to their research questions inside the ruling way of thinking.

One should think that the growing visibility of transsexual men and women should offer science an exciting new challenge that made the researcher look at traditional concepts in a new way. Just think about it: Here you have men who first love women and who after they have gone through a sex change become attracted to men!

How amazing is that?! I mean, it should be totally clear that you need a revision of concepts like straight and gay, right? Well, not according to this school.

Think of what we could learn about what it means to be a man or a woman by studying their lives and their experience. Instead the researchers end up pigeonholing them into old categories that no longer make any sense. What a waste!