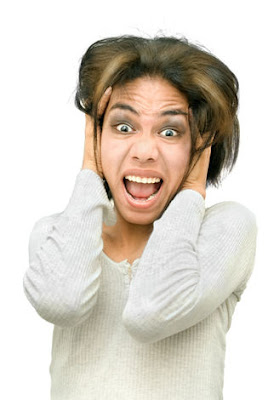 As I have noted in previous blog posts, the autogynephilia concept grew out of a theory developed by Ray Blanchard. He operated with two different and unrelated types of male to female transsexuals.

Lawrence presents a table of "target location errors" (click on it to enlarge):

It is a fascinating table. Pedophilia (attraction to children) is as "uncomplicated" as gynephilia (the desires of normal straight men), while autogynephiliacs are grouped with those who desire to amputee one of their limbs (!).
Group 1, the autogynephiliacs, consist of mis-directed heterosexuals, according to this theory. They get aroused by the idea of having a female body, because they internalize what should have been an external "object", a woman in flesh and blood.
Group 2: Homosexual transsexuals
So what about the other group of transsexual?
Personally I find their description of this group hard to understand. It is as if these researchers have taken the stereotype of the feminine queen or fairy and turned it into a scientific category.
The homosexual M2F transsexuals are simply feminine gay men.
At times it looks like Lawrence and Blanchard accept this group as "true" women. After all, they do not try to acquire the body type of their object of desire.

"Homosexual MtF transsexuals are not sexually aroused by the idea of being women, but instead seek sex reassignment because they are, as previously noted, naturally very feminine on many physical and behavioral dimensions (Blanchard et al., 1995; Whitam, 1987, 1997), resulting in the prospect of greater social and romantic satisfaction and success after sex reassignment than before. Natural resemblance to the status they want to attain (i.e., womanhood) thus provides an obvious explanation for homosexual MtF transsexuals’ desire to undergo sex reassignment."

In one way you can say that they change into women to get laid.
However, at the same time these are persons who do not experience sexual arousal out of getting female genitalia, and who in many cases are indifferent or even hostile to their new vaginas.
I fail to see how these can be less "dysfunctional" than the autogynephiliacs -- if we accept this way of thinking.

It seems to me that Blanchard and Lawrence accept neither homosexual transsexuals or autogynephiliacs as women. They remain men in their view, both before and after the surgery.
The evolutionary narrative
I believe much of the reluctance of Blanchard & Co to accept the narrative of autogynephiliacs being women, and not mis-directed men, is that they are deeply rooted in evolutionary science.
That is in itself not a problem with me. I believe we have a lot to learn from evolutionary science, also from so-called sociobiological research, i.e. research that tries to explain social and cultural phenomena as the result of biological evolution.
There is clearly a biolgical foundation for some of the differences between the genders. After all, the hormonal balance is different, and we know that both testosterone and estrogen influence the way we behave.
It may be, however, that Blanchard and Lawrence have gone into a trap that is not uncommon in this research field. They oversimplify a complex sociobiological phenomenon.

Evolution is about the transfer of traits via genes. Traits that benefits the survival of a genetic lineage will help those genes survive in the battle for survival. Traits that may harm the organism are rooted out. In simple words: They die out because the individuals that carry those genes die and fail to get viable offspring.
The normal way of understanding this arms race is via the mixture of genes between male and female. In normal terms: Men and women have to get together to produce kids, and only those that get children can transfer their genetic heritage to posterity.
In this narrative, the traditional male/female bonding becomes the norm. Everything else is a deviation. This explains why both Blanchard and Lawrence continue to call autogynephilia a paraphilia, a misdirection of sexual desire. The phenomenon does not make sense in evolutionary terms.
(Interestingly enough Blanchard and Lawrence seem to accept homosexuality as a natural behaviour, even if it makes as little sense in evolutionary terms as autogynephilia.)
The error of their way is, I believe, that they fundamentally think of the feminine and the masculine as two mutually excluding complexes of traits or sets of looks and behaviours, because they believe this division is necessary for procreation and the dissemination of genes.

Man: a complex set of variables
We all know that what makes us masculine or feminine is a mixture of traits, and that no man and no woman are completely masculine or exclusively feminine. After all, all men have the genetic code for woman and visa versa. We are not two separate species.
The end result of the merger between the sperm and the egg is a human being based on a large number of genes. However, there is not one gene for each behavioural trait. Most of the traits are caused by a combination of genes. Different combinations may give different behaviour.

Here's a relevant quote from the New Scientist:

"Everyone knows tall parents tend to have tall children, and recent studies of the genomes of 30,000 people identified about 50 genes associated with being tall or short. Yet together these genes accounted for only about 5 percent of the inheritance of height."

If the genetic causes for height are this complex, it is reasonable to believe that the causes for sex and gender are equally complicated.
And that is not all: We also know that the genes make proteins that are used to tell the cells how to behave. There is a proteom as well as a genome. The complexity of this system is mind boggling and the number of possible combinations of genes and proteins seemingly endless. The proteom may even be influenced by your surroundings: what you eat and what you experience (stress).
On top of that our personality and our sexuality may be influenced by the hormonal balance in the fluids in the womb, toxins in our environment as well as social and cultural factors and -- dare I say it? -- free will.
Given all this variation, why should we expect human beings to fall exclusively into one of two mutually exclusive categories: male or female? They clearly do not.
The pure existence of homosexuals prove that the Y chromosome does not necessarily a "normal" man make. And homosexuals exist, even if they are at an evolutionary disadvantage (they are less likely to get kids).
There are clearly combinations of factors that bring forth autogynephiliacs in the same way as there are combinations that produce homosexuals.
Beyond the binary
A possible alternative narrative can therefore be the following:
Yes, autogynephiliacs are in a way women trapped in men's bodies. In the lottery of genetic combinations, they clearly won some very strong feminine traits, as well as some basic feminine instincts.
But you can also say that they are men trapped in a woman's mind. They have man's body, and love women as other heterosexual men do, but the woman stops them from having a more traditional love life.
To this Blanchard and Lawrence may say that yes, this is exactly what they have been arguing all the time. Autogynephiliacs are the outcomes of an unfortunate mix of genes that stops them from becoming "normal men".
All right, but there are two important differences between my story and theirs:
(1) For me there is nothing normative in any of the genetic cocktails called men. Men fantasising about having a woman's body are not necessarily suffering from a mis-directed libido. They are not necessarily less capable of loving others than other men or women. Their condition is no more pathological than homosexuality. They are what they are. Sure, we have problems making our love life work -- maybe bigger problems than many -- but no one finds love easy.
(2) Autogenphiliacs may not be women trapped in men's bodies. That narrative is, after all, as traditional and conservative as the one of Blanchard and Lawrence.
Maybe autogynephiliacs are more than mere women, and more than mere men. Maybe they have something of both. This applies to all human beings, of course, but in the autogynephiliac this is more acute than in most, precisely because of the conflict between sexual desire, the body and the surrounding culture.
A curse and a blessing
If that is the case this condition will be a curse as well as a blessing.
It is a curse, because at the moment there are few that accept the legitimacy of this type of combination of feminine and masculine traits. Blanchard and Lawrence have given us a category, but has also labelled us as freaks. Some other transsexuals insist that this combination is unnatural as well: M2F transsexuals are really women and only women, so get that surgery and find yourself!
It can be a blessing, because we, more than many others truly bridge the genders. It should be easier for us to understand both women and men, than "normal" women or men (or homosexuals for that matter).

Blanchard would disagree, and argue that being men we know nothing more about women than other men. Many transsexual activists would in one sense agree with Blanchard on this one: only women know how women feels, and the only real women of the transgender community are the genuine transsexuals: women trapped in men's bodies, not fuzzy borderline people like the autogynephiliacs.
Be that as it may: I think you will find that autogynphiliacs often get along better with women than the majority of men. They have greater empathy, simply because they recognize themselves in the other sex.
Anyway: Thanks to Blanchard and Lawrence as well as the many transsexual activists out there many of us have the opportunity to choose our way of life: mostly male or mostly female. Surgery is a possibility, if your family life and professional life allows it.
To sum up
Is autogynephilia a well defined sub-category of humanity? I think not. Not in a scientific sense, no.
I find no absolute boundaries between the sexes or the genders or whatever it is that define us. Statistically speaking the variations tend to conglomerate around some larger groups ("traditional heterosexual men and women") but the borders seem fuzzy or porous.
As a term used in a discussion of gender identity it is very useful though, which is why I am not joining those that accuse Blanchard and Lawrence for crimes against humanity.
They believe in what they do and they truly believe that they are doing us a favour. They have definitely helped me understand myself a little better, even if I cannot agree with all they have to say.
Posted by Jack Molay