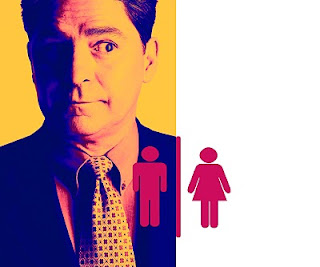 Here is another guest post written by Nadia-Maria Soraperra for the Knowing about CDing forum over at Flickr (an invite only forum).

Nadia argues that crossdressing is – usually - neither about sex nor fetishism:

When you are studying the crossdressing phenomenon in-depth, you are faced to the unavoidable, irrefutable, (irrefragable) observation that most crossdressers used to indulge in autoerotism (or in sexual acts with others) using women clothes.

It must be rare if you ever happen to know about one crossdresser who never did it, or never will do it, at least for a certain period of her life. For many CDers [crossdressers], discovering autoerotism whereas playing with woman clothes around puberty is exactly how the whole history has begun.

This sexual behaviour, involving pieces of women clothing, is not easy to understand from a layperson point of view (who is as a rule the CDer herself or of her spouse), but all seems to be clearer for them as soon as you call it a fetish, a sexual disorder known as fetishistic transvestism.

That’s why an easy conclusion has been consistently that crossdressers suffer essentially from that disorder and even dress ultimately for sex. Ironically, many CDers will eventually agree with being diagnosed as fetishists. For those who may not agree at being labelled as fetishists, so-called «experts» (the famous Ray Blanchard being one of them) have individuated various other disorders, and especially this one known as GID, the «Gender Identity disorder».

Attentive readers in this [flickr] forum already know that I don’t agree with that simplistic and biased view. I believe instead that our population of «regular crossdressers (RCDs)» don’t suffer any disorder at all, but from a severe unacceptance by society that may lead some of us to depression or despair.

To understand something about crossdressing you don’t have to be confused as taking consequences for causes. In an insightful paper, the author shows rather convincingly how sexual excitation from crossdressing is only a side-effect of crossdressing, not the cause. Please see : The causes of Transvestism I already quoted in an old thread.

Anyway, as human beings, all of us are «sexual» beings and we know that sex – if not driving the world – at least plays a (great) role for almost everybody , whether a man, a woman, or a transgender being. We devote considerable time to find partners for the sake of enjoying good sex.

You have to consider that the simple fact of needing a satisfying sexual life may drive you to a considerable investment in life. As a genuine man, you may develop strategies at seducing the proper partner, eventually marry her and devoting your entire life at caring for her and raising her children.

A genuine man can fail at enjoying a satisfying sexual life with the proper partner(s), whether or not they are ready to invest enough in dating potential partners. Some men may have no success at all with women, whereas some others are highly functionning people who simply do not have enough time to invest in sex, because they wish to pursue other goals in life they rate as more important than just good sex.

That’s why you will easily find people who may end in indulging mostly in seemingly inappropriate behaviours such as autoerotism, or booking escorts, etc. Yet, if these men are not simultaneously classified as crossdressers, psychiatrists would not suspect any disorder at all in them, because their behaviours are easy to understand even to the layperson.

A crossdresser is «apparently» a genuine man, yet many of them may spend all or almost their entire life without understanding properly who they are. When they will begin to understand who they are, they may not have enough time to invest in finding the proper partners for the sexual life they would deserve.

For instance, most will discover too late they are not sexually at ease in the role of a husband making love to an CD-unaccepting wife. Then, they may not want to seek for a more satisfying sexual life with other partners, because they don’t want to ruin their marriage and miss their duties towards their family and children.

Other crossdressers, unmarried, may still have difficulties to revise their own view at sex. They may believe for instance they are 'perfectly' heterosexual and are eventually afraid at attempting bisexual experiences, whereas it could possibly be the proper solution for them.
There are several ways of enjoying a satisfying sexual life when you are a crossdresser, whether you are straight, bi or gay. It all depends of who you are and nobody can tell you for sure what to do about your sexual life.

As an example, for a heterosexual CDer, a good way might be to find an accepting wife who can cope with the CDing needs of her husband in their sexual relations. Yet we know that this situation is only for the happy few.

Most CDers will never be in a favorable situation, and will have to look for second-choice opportunities, such as autoerotism in the closet. Many will even never fully realise they could enjoy another sexual life, much more satisfying, involving the proper partners (another accepting GG [genetic girl], a male admirer, a lesbian TS, etc.)

Unacceptance of CDing by society makes most CDers indulge in an unproper sexual behaviour, called by incompetent Ray Blanchard a disorder. CDers do that only because this behaviour appears for them as an easy response to a very delicate situation. They prefer a less then perfect sexual life for the sake of saving what appears for them the most important goals in their life.

PS. Of course fetishism does exist, yet it is wholly independent from crossdressing.
Posted by Jack Molay